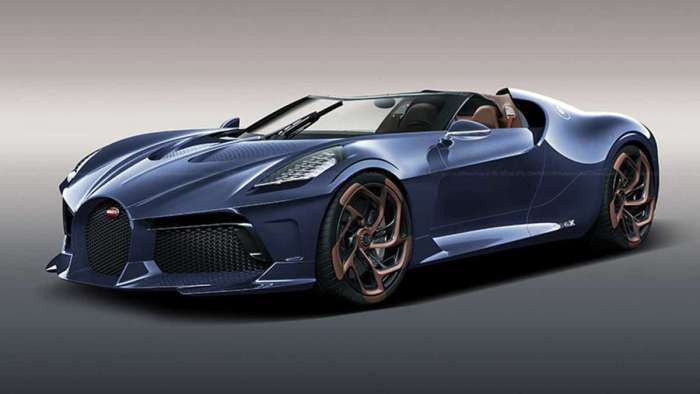 Bugatti may be adding a daily driver in the next few years. It will likely be an electric and it will top out in the seven-figure range, but, it will still cost less than the marque's bread-and-butter supercar line, the Chiron. And, it will have to be fast.
Advertisement

There have been rumors and stories coming out of Molsheim, Germany, for some time that Bugatti may be adding to its lineup. Some of those stories are directly attributable to Stephan Winkelmann, chief of the VW subsidiary, who recently said there might be a model soon that will slot under its supercar, the Chiron.

And, now, the Bugatti chief also told Motor1.com, in an exclusive interview, that the automaker is ready to introduce an additional model to its vehicle lineup. The new model will have a body style that is different than any other model currently sold. It will also be an electric vehicle (EV).

“I think that we have the opportunity to do more [than one car],” Winkelmann said. He made the comments during Motor1Days at the Autodromo di Modena on Day 1 of this year’s Mille Miglia.

During the interview, Winkelmann shared his thoughts on exactly the type of car that Bugatti could offer. Winkelmann believes the new model should not only be fast but, it should also be a daily driver. This certainly would be a departure for the vehicle manufacturer whose only vehicle is a supercar, a vehicle that is better suited to the track than the highway.

It Would Have To Be ‘The Best of its Kind’

“This could be, for example, a full-electric car,” he noted, adding that while he isn’t opposed to an electric Bugatti, he said it would have to “be the best [of its kind], that’s for sure.”

And, the model will likely have a body style that is markedly different than the Chiron, or its predecessor the Veyron. Bugatti Chiron is the automaker's big ticket supercar.

“It’s clear that when you think about the second [Bugatti] model, you always have to see what [the body style could be],” Winkelmann noted. “Believe me, we looked into every detail of the body style, and I think that there is one that is very promising for a company like Bugatti. [It’s a body style] which is not today on the market.”

Pricing Would Top Out in Seven Figures

As one might expect, the new model – if it gets here – will likely be far less expensive than the supercars the automaker now sells. Winkelmann told his interviewer that the new model would still hit seven figures, but, when you look at relative pricing that is still far less than the multi-million-dollar supercars that currently give Bugatti its identity.

It’s now a matter of time and planning as to what will be Bugatti’s second model line. However, if Winkelman has his way, the next vehicle will likely have its unique design; will sell in the low-seven-figures, and will likely be an EV. Yes, it will be super-quick, but, rather than use it only on a track, it will be designed to be a daily driver.

DeanMcManis wrote on May 21, 2019 - 2:03pm Permalink
This move makes sense, both because VW (who owns Bugatti) is making a strong corporate commitment to EVs, and also Tesla has proven that EVs can match or beat traditional gas powered supercars in real world acceleration. Yet offer silent comfort and daily driver reliability. The trouble that I see with a future million dollar+ Bugatti BEV is simply the upcoming Tesla Roadster, which is anticipating acceleration to 0-60 mph. in 1.9 sec., acceleration 0-100 mph. 4.2 sec., acceleration 1/4 mile. 8.8 sec. Top Speed. Over 250 mph. Wheel Torque. 10,000 Nm. Mile Range. 620 miles. And importantly a $225K price tag (less than the sales tax on a Chiron). Sure Bugatti would have far superior build and materials quality, but I think that Tesla has got them at least a little worried about performance comparisons against their $$$ flagship exotic cars.