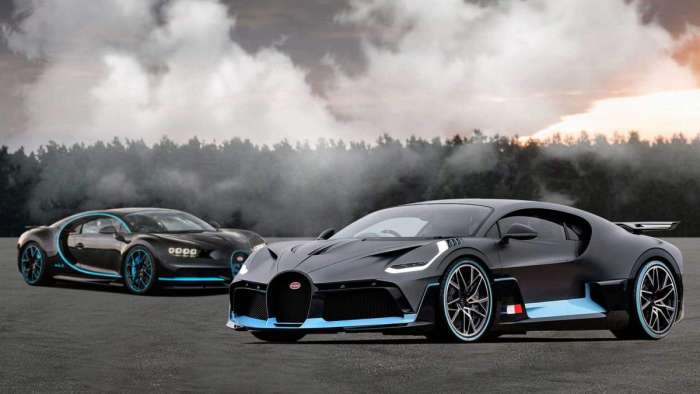 If You Have Wanted A Bugatti SUV, You May Soon Have One

For the last couple of years -- okay, it seems like that long -- Bugatti has been hinting that it would be building an SUV. However, any comments in that direction were just left hanging in mid-air as the commenter moved on to other topics. Now, though, it looks a little more likely. But -- there's always a but -- it will only come if VW (Bugatti's parent) can find the bucks to do the job.
Advertisement

Hard on the heels of the development of the new Chiron-based Divo supercar, Bugatti may be joining the ranks of other performance car makers such as Bentley, Lamborghini, McLaren, Ferrari, Lotus, Maserati, Rolls-Royce in designing and building an SUV. McLaren May Build An SUV, But Will It?

’The Brand Is Ready For More:

“The brand is ready for more,” said Stephan Winkelmann, at last week’s Paris Motor Show. “The W-16 engine is at the core of the brand today, but it won’t remain the heart forever.”

This information comes a month after Winkelmann indicated that Bugatti could benefit from a second model, though, at that time, he didn’t give anything away.

Meantime, the new Divo Bugatti Sings Out With Its Divo – and of course, its linear parent the Chiron – both sport 8.0-liter quad-turbo W-16 motors. The engine’s horsepower output rating is 1,479. However, Winkelman says, the VW subsidiary may consider a new engine and chassis variants. Indeed, the veteran VW exec indicated the new vehicle could be a hybrid. Much of the movement toward a new powerplant here is because the automaker recognizes that “You have to consider social acceptance regarding emissions.”

About the only other major specialty car manufacturer that isn’t currently offering or planning to submit an SUV is exotic car manufacturer McLaren. Instead, it is likely that McLaren will build an electric supercar.
Parent VW Under Huge Financial Strain

Before you get all excited about the prospect of a Bugatti SUV, it is a good idea to remember that VW will have to spare the investment for a new car at a time when VW is focusing more on autonomous and electric vehicles. It is also facing substantial financial costs in the fallout from Dieselgate. At last check, the company had paid close to $26 billion, and there are still lawsuits pending.

As if to show just how tenuous the link to an SUV is to Bugatti, said Winkelman, “We need to come up with a convincing pitch to our shareholders that justifies the related investment,” Winkelmann concluded at a Paris Motor Show press shindig.

DeanMcManis wrote on October 9, 2018 - 2:57am Permalink
I wouldn't say that dieselgate soured people against Bugatti building wasteful cars. Most people do not even know that VW owns Bugatti. And there is a big difference in lying about building thousands of over polluting cars, as opposed to building a tiny number of super expensive hypercars. Now I do think that building a 1500HP SUV is the definition of excess, but they will be so rare that it's better to see cars like this as being art, rather than having any ideas of social acceptance for such a rare monster.
Demone Gipson wrote on October 14, 2018 - 1:36pm Permalink
I think a hybrid SUV from Bugatti would be a great move, and if the rumors are true a new hybrid engine would be unique to Bugatti,.... Not just the SUV but also a true successor to the Chiron! We already can expect a 1000+ bhp in any form! One rumor suggested that it would be a quad turbo V-14 or V-16 with a hybrid system.makibg up the remainder of the horsepower! As we know the Divo was kind of a freespirited move forward for Bugatti and Bugatti are looking at several new variants of the Chiron including as they previously called the Apartment( GrandSport), Superleggera( Aerolithe), and the SuperSport,.... And a recent rumor says that Bugatti are looking at a second bespoke model in the vein of the Divo,..... These models will likely be the research the company will base the investment from parent company VAG on!!

Elon Makes a Cybertruck Statement With an Action, But Quiet in Words
Tesla's Record Month in China: Doubled Registrations in March 2021
END_OF_DOCUMENT_TOKEN_TO_BE_REPLACED