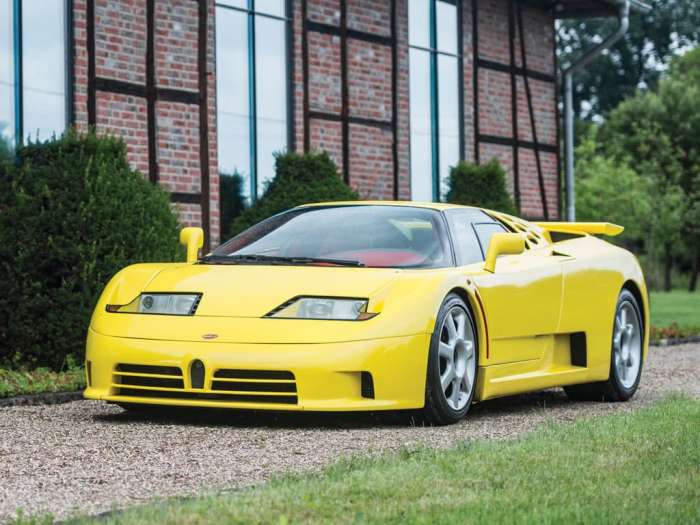 Rarest of Rare Bugattis To Hit Paris Auction Block In 2019

One of 30 Bugatti EB110 Super Sports, made as part of the effort to qualify for Le Mans in the early 1990s, will go on Sotheby's auction block next year. The SS, made using carbon-Kevlar body panels, was originally sold to a German citizen, but it ended up in a Japanese collection. Its condition makes it a sought-after collectible in the automotive world.
Advertisement

There’s no doubting that Bugatti has a long – and fast – heritage. As far back as the 1920s and 30s, the vehicles of Hettore Bugatti made names for themselves in competition and luxury. Eight of the most famous cars in the world are the Bugatti Royales, coach-built works of art that today are worth the better part of $50 million, when, and if they come on the market. Then, there are the famed Bugatti racers of the same era which made the name synonymous with power and competition in the same period.

Marque Has Always Retained Its Magic

Though the marque faded from the scene in prewar Europe, the name Bugatti always retained a hint of magic, right up to the day when Volkswagen took it over in 1998 and made it part of the Volkswagen Group. Indeed, in the 1980s and 1990s, there was a resurgence of the House of Bugatti as the automotive team worked to restore competition to the Bugatti heritage.

About 1991, Bugatti was seeking to re-enter the world of competition. So, it fielded the Bugatti EB110, the vehicle that pointed the way to the famed hypercars of today like the Veyron and the Chiron. Indeed, the EB110 Super Sport turned up the heat on its performance pot to boiling.

It is true that Bugatti had come back toward performance in a significant way. For example, the standard Bugatti racer averaged top speeds of 213 mpg and used four turbochargers in its 3.5-liter V-12. The engine also cranked out a potent 550 horsepower which humungous for the day.

Enter the EB110 which heated things even more than the standard Bug. According to specifications, at the time, power was reportedly 610 horsepower. The increase in output was due to a new engine computer (ECU), larger injectors and better exhaust efficiency.

The power improvements raised the top end to 220 mph and meant that the EB110 could run from 0 to 62 mph in 3.3 seconds, which is the realm of the hypercar. A vital part of the EB110’s increased performance was due to a new substance at the time, carbon Kevlar® bodywork, which meant the factory could shave 150 kilograms from the vehicle’s weight.

So that the SS could take advantage of production class rules, Bugatti had to homologate the vehicle. In other words, it had to be a standard production model. To achieve proper homologation for the GTI class at LeMans, Bugatti had to build a set number of them. This is why Bugatti built 30 EB110 Super Sports. Interestingly, while it did make the EB110 a factory production model, it was also one of the rarest supercars on the globe. Bugatti Super Sport Boosted Performance Curve.

Perhaps the rarest of the rare is the EB110 that is slated to come up at Sotheby’s 2019 Paris Auction. The SS has only 560 miles on the clock. A German citizen received the EB110 in 1994. The particular SS eventually moved into a Japanese collection – there’s no word on how that occurred. However, what is known is that the current owner has kept the EB110 in excellent shape. The factory paperwork on the vehicle shows the SS is in very original condition. Because it is in great shape, it is also a prime collectible. Bugatti Super Sport Headed For Sotheby's Auction Block.