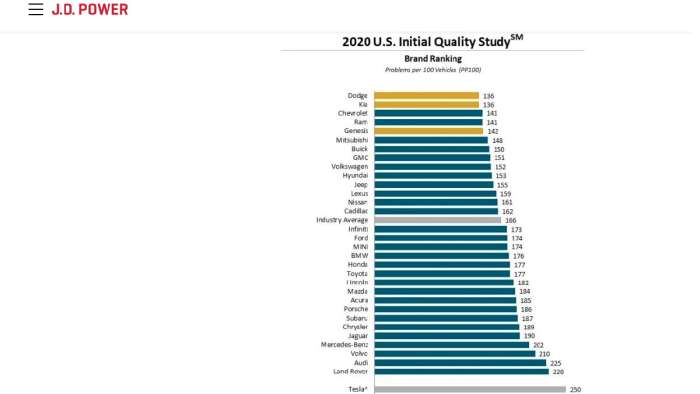 J.D. Power has released the results of its latest Initial Quality Study (IQS) and Tesla fans are about to light up the comments and chat rooms. Mainstream affordable Dodge has surged to first place among brands and the luxury-priced Tesla brand is ranked dead last.

The J.D. Power Initial Quality Study is now in its 34th year. The study data is populated by owner surveys and looks at problems experienced by owners of new vehicles during the first 90 days of ownership. This latest study is for model year 2020 vehicles. Initial quality is determined by the number of problems experienced (reported by owners) per 100 vehicles (PP100), with a lower score reflecting higher quality. Dodge earned a score of 136. Tesla scored dead last at 250.

“The Initial Quality Study is the industry benchmark for new-vehicle quality and, year after year, automakers apply the insights they learn from consumers to make positive changes,” said Dave Sargent, vice president of automotive quality at J.D. Power. “The higher problem levels we see in this year’s study don’t mean vehicle quality has worsened; rather, the redesigned study asks additional questions that allow owners to cite more of the problems that they are experiencing.”

This is the first time enough owner data were available for Tesla to be added to the study. J.D. Power says that Tesla is not officially ranked among other brands in the study as it doesn’t meet ranking criteria. “Unlike other manufacturers, Tesla doesn’t grant us permission to survey its owners in 15 states where it is required,” said Doug Betts, president of the automotive division at J.D. Power. “However, we were able to collect a large enough sample of surveys from owners in the other 35 states and, from that base, we calculated Tesla’s score.”

So, like with IIHS testing and media testing of fleet vehicles, Tesla opts not to participate in industry-standard evaluations. Yet, J.D. Power did its best to include the manufacturer.

Dodge tied Kia for the top spot among 31 competitors. This makes Dodge the first "domestic"* brand ever to achieve a No. 1 ranking in the prestigious study’s 34-year run. FCA's performance brand leaped seven places from last year’s IQS results.

“These results reflect the relentless, whatever-it-takes attitude of our team,” said Mark Champine, Head of Quality, FCA – North America. “Our complete focus is the customer and these outcomes reinforce that we are on-target. The team is going to be inspired and motivated and will continue to push forward.”