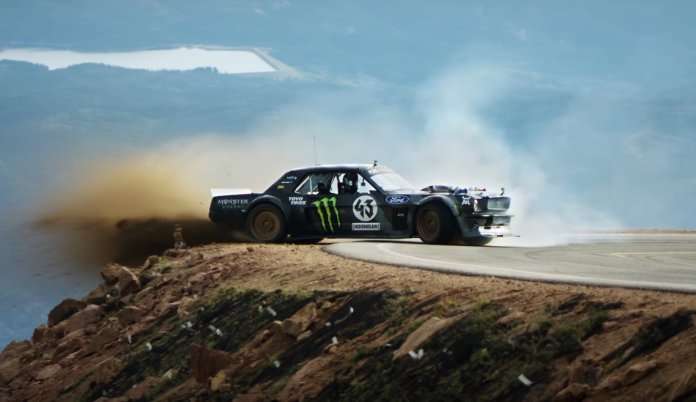 Last October, Ken Block and his team at announced that they had modified the Hoonicorn Ford Mustang – an all-wheel drive 1965 pony car with a NASCAR V8 – by adding a big set of turbochargers which exhaust up through the hood. When the Hoonicorn was first introduced a few years back, the 410 cubic inch NASCAR engine made it an impressive AWD classic Mustang with 845 horsepower, but with the addition of the twin Garrett turbochargers – the output of the Hoonicorn V2 was lifted to 1,400 horsepower.

A few days after Block introduced the 1400hp Ford Mustang named Hoonicorn V2, a 45-second video showing the rally racer storming up the road at the Pikes Peak Hill Climb with the promise of a full-length version coming in the summer of 2017. It might technically be a few days late, as summer officially ended on the 22nd, but this morning, Climbkhana debuted on YouTube and it is, without a doubt, Block’s riskiest driving video thus far.

Climbkhana: Pikes Peak in a 1400hp Ford Mustang
Ken Block’s newest video is titled Climbkhana and it takes place on the course of the Pikes Peak Hill Climb in Colorado. The course is 12.42 miles long and has 156 turns with an overall elevation change of more than 14,000 feet and Block is attempting to tackle the course in his Hoonicorn 1965 Ford Mustang. This monster Mustang has a twin turbocharged NASCAR Ford V8 fitted with twin turbochargers, sending some 1,400 horsepower through the sequential transmission and the advanced all-wheel drive system to the Toyo tires.

In the past, Ken Block fans have watched him show off his driving skills in a variety of risky settings, including a tight industrial complex, a movie studio, a tight warehouse complex, through the streets of LA and on a barge floating near San Francisco. In every video, there has been a very real chance that Block could be injured in the event of a crash, but none of those previous settings offered the risk of the Pikes Peak course.

While it seems dramatic to say that he could have died, seriously, he could have died. There are portions of the Pikes Peak course where a car falling off of the road could tumble hundreds, if not thousands of feet. Living through that kind of fall would be unlikely, even in a fully built race car with a cage and other safety equipment, but that didn’t hinder Ken Block from putting on the kind of show that we have come to expect from the original Hoonigan.

During the 9-minute video, Ken Block and his Hoonicorn Ford Mustang race up the Pikes Peak Hill Climb course, adding in some extra burnouts and donuts along the way. While he doesn’t set any records and we don’t learn a time (which makes sense considering that he intentionally spun the car around a few times on the way up the hill), there is no question that Block’s run of the famous road is one of the most exciting on video. He even goes so far as to let the back end of his twin turbo Mustang dance along the edge towards the top of the hill – a move which could have led to a horrific crash had things gone wrong.

Between the high level of risk, the sound of the boosted NASCAR V8 under the hood of this AWD 1965 Ford Mustang and the fire popping out of the pipes sticking through the hood, this is definitely one of Ken Block’s most exciting videos, so crank up your speakers and enjoy!

LG's New EV Battery Plant Is a Welcome News for Tesla
Tesla Giga Berlin's New Hurdle: It's Not Only the Gov't, but Now Tesla Itself
END_OF_DOCUMENT_TOKEN_TO_BE_REPLACED