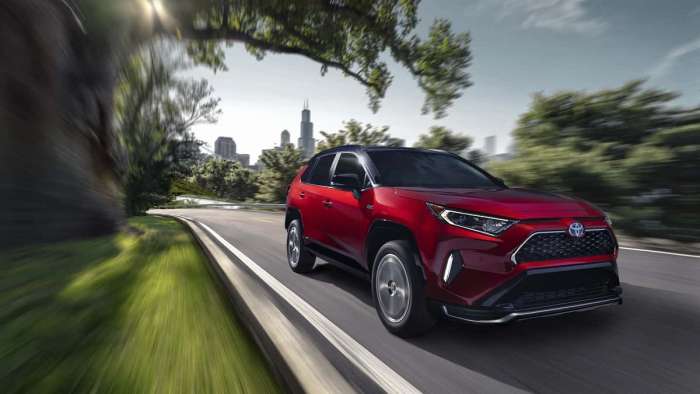 In an extended test, one Consumer Reports tester explained why he never had to add gas to the RAV4 Prime Plug-in hybrid over many weeks and 800 miles.
Advertisement

In its latest “Talking Cars” episode, the staff from Consumer Reports (SR) provides three opinions and many observations on the new Toyota RAV4 Prime plug-in hybrid-electric vehicle (PHEV). CR’s Director of Auto Testing, Jake Fisher, provided the most details. Jake has over two decades of vehicle testing under his belt. Due to the recent unusual circumstances, the RAV4 Prime was with him for an extended period. During the long test stretch, he put 800 miles on the vehicle and never added gasoline.

Living Electric With the Toyota RAV4 Prime PHEV
The RAV4 Prime can operate as a hybrid-electric vehicle, or it can operate as an electric vehicle using only its traction battery and electric motors. Many owners of PHEVs such as the Honda Clarity and the similar Chevy Volt report that they “never use gas.” In fact, many PHEVs have a reminder to use the gasoline in the tank so it does not get stale. Some even have a built-in engine run cycle to ensure the gas doesn’t get old.

Jake lives in a home with a garage near the Connecticut headquarters of CR. During his testing, Jake explained that he plugged it in every evening and in the morning the vehicle was fully charged. The RAV4 Prime has an EPA-estimated all-electric range of 42 miles. We confirmed that in our own real-world testing this past summer. Even with the AC on all the time, we did see 42 miles of EV range in real-world driving.

Winter temperatures reduce the battery range in all EVs. In a study of vehicles by AAA, the Tesla had a 38% reduction in range. The RAV4 Prime always had about “30 miles of range in winter temperatures” to paraphrase Jake’s observation. That range worked out to be more than enough for him. As he explained, “Somehow in my life, everything I go to is 15 miles away.” Jake concludes that “You may not need to get a full EV to just stop using gasoline for the most part.” Jake also observed that the RAV4 Prime “just stays quiet.” He found that it had a very different driving experience than past Toyota hybrids he had driven.

Jake’s household is no stranger to green Toyotas. He says in the video that his wife has a Prius which the family only needs to fuel up “every three months.” What fuel economy does CR report based on its time with the RAV4 Prime? 72 MPGe.

Other feedback from the group included Mike Quincy’s comment that the 300 hp of the RAV4 Prime makes the vehicle “plenty quick.” He added, “...it really scoots.” He also said that CR was impressed with the fuel economy and noted the team observed 40 miles of electric-only range. Mike also found the ride of the Prime to better than the regular RAV4, something he called an added bonus.

Keith Barry, one of Consumer Reports writers/editors lives in a home close to Boston that doesn’t have a garage. So for him, charging up was a problem. His conclusion was that a conventional hybrid would be a better choice for him personally rather than have the larger battery the plug-in offers. Keith volunteered that he walks most places and when he does drive, it is far away. His comments are around timestamp 29 minutes.

RAV4 Prime Areas For Improvement
Where does CR see room for improvement in the RAV4 Prime? Stopping distances made the list. Mike also disliked the rear backup warning sound the RAV4 Prime has. Jake feels that he should be able to input the charger with just one hand. He likes the way vehicles like the Tesla Model Y have an automatic door for the charge cover. Rather than adopt that, Jake (an engineer) is thinking, why not an inductive connection-free charging system?

CR Conclusion RAV4 Prime Plug-in Hybrid vs. Other Green Options
Mike Quincy says in the video at time stamp 12:57, “I think this vehicle is way more appealing to me than a regular EV (battery-electric vehicle)”. Mike also says the RAV4 Prime is typical for Toyotas in that it has a “top-notch reputation for reliability.”

Consumer Reports offers comprehensive information about the Toyota RAV4 Prime which you can read online as a subscriber. There are projected reliability ratings, drive test ratings, owner satisfaction ratings, and much more there for you to see.