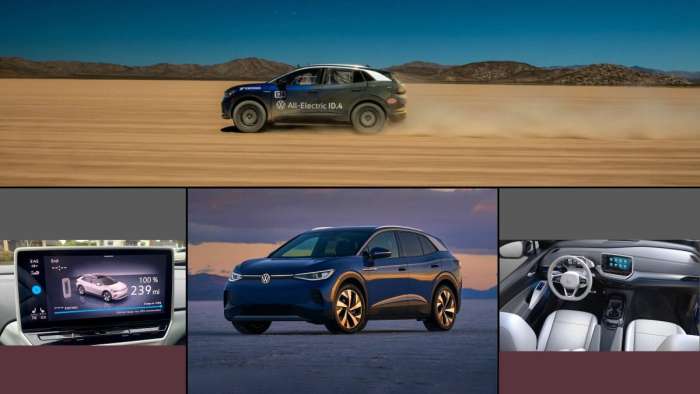 Volkswagen ID.4 Lacks The Oomph Of Jeep Wrangler 4xe, But I Love It!

The Volkswagen ID.4 is a very cool electric SUV. It’s shown itself to be off-road capable, competing in the Mexican 1000 against legends like the Jeep Wrangler and Ford Bronco. The Volkswagen ID.4 may not have off-roading as its main intent, but it makes a great family vehicle.
Advertisement

While I might make some comparison between the Volkswagen ID.4 and the Jeep Wrangler 4xe that I keep raving about, it’s not really fair to the ID.4. The Wrangler is a purpose-built off-roading vehicle. The ID.4 isn’t. The ID.4 has more in common with the Toyota RAV4 Prime, and in fact has very similar statistics. While both the RAV4 Prime and the Wrangler 4xe are plug-in hybrids, the ID.4 is a battery only vehicle. The ID.4’s 0-60 is about 7 seconds, slower than either, despite the ID.4 being electric and thus having access to the famed “torque-on-demand” of this kind of motor.

The ID.4 offers a more refined ride than the Jeep, as does the RAV4 Prime. It’s got confident handling, though it’s still not as responsive as other EV SUVs. The Volkswagen’s 7 second acceleration is partially due to its single motor. Many other EVs, like the Ford Mustang Mach E or Porsche Taycan utilize more than one motor to help boost total output. The Ford Mustang Mach E 1400 uses 7 motors to put out similar performance numbers to its brother Mustang EV, the Cobra Jet 1400. 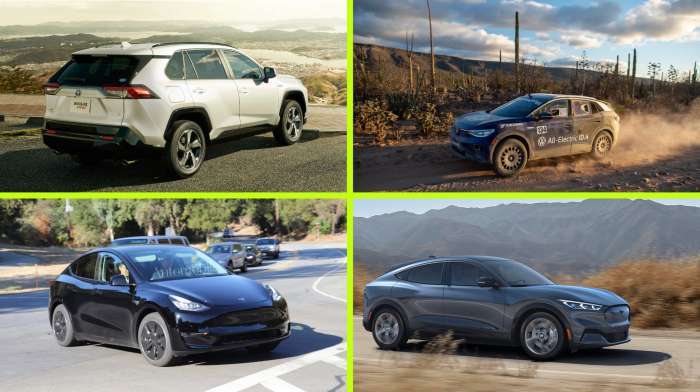 Another EV that offers a single motor variant is the Tesla Model Y. The single-motor version is still capable of slinging the Model Y to 60 miles per hour from a stand still in just about 4 seconds; again 3 seconds faster than the ID.4. Some drivers may feel like this ‘slow’ acceleration isn’t acceptable, but I feel like it’s worth noting that even though many EVs have amazing acceleration, traditional, ICE Powered vehicles have never ‘needed’ that kind of acceleration. My Dodge Challenger R/T Plus only manages a 0-60 in the 5 second range if I’m pushing it and it’s a ‘muscle car’.

It is easy to forget that a 0-60 of 5 seconds used to be amazing or even unheard of. The Ford Model T had a top speed of 45 miles per hour, though of course folks modified their vehicles to get faster and faster speeds. Even though these vehicles like the Model Y or Mustang Mach E are capable of these blistering 3.5 second 0-60 mph sprints, they aren’t capable of the fastest sprints that ICE vehicles are capable. For some ICE-powered drag cars, their entire quarter mile is performed in 4 seconds.

The ID.4 isn’t a race car. It’s not a drag racer that’s supposed to hit 200 miles an hour. The ID.4 is a crossover with family utility at its core. The ID.4 puts its battery to good use, getting a decent estimated 260 mile range. It’s also a crossover that will give a stock Subaru BRZ, which is supposed to be a driver focused car, a run for its money on the drag strip. While this may imply that BRZ drivers should rev at ID.4 drivers to attempt to start a race to test themselves against the might of EV torque, illegal street racing is frowned upon. What that does mean is that if you buy an ID.4, you should not have too much of an issue merging with traffic as its speed is more familiar with other family vehicles.

I wouldn’t be surprised to find out that some drivers prefer the more relaxed pace of the ID.4 over the acceleration of faster vehicles, like the Mustang Mach E, as they may find those cars ‘too much to handle’. I had a coworker who drove a Hyundai Elantra, one of those ‘family vehicles’ that are some of the most common on our roads. She thought that her vehicle was accelerating too quickly at 3500 rpm, a thousand shy of where its small 4-cylinder engine put out its highest power, and I can only imagine that the acceleration from a vehicle like the Tesla Model Y or even the Toyota RAV4 Prime would prove intimidating to her and might make her shy clear of them.

There is a market for cars that aren’t turbo-charged, super-charged speed demons. It’s actually quite a large market, truth be told, and it’s good to see less of a focus on acceleration and raw power and more of a focus on fit and finish. The ID.4 is a passenger vehicle for suburban commutes and it excels at that purpose. Its Passenger compartment is slightly larger than the RAV4 Prime, and its interior is simple, but not spartan. It has a refined aesthetic in keeping with its German pedigree and while it doesn’t have the interesting auditory warning system that will grace the BMW i4 or the cool one found on the Taycan, it sounds futuristic with it’s soft whistling whirr to warn pedestrians of its approach. It can be heard here:

The ID.4 may not scratch your rock-climbing itch the way that the Jeep Wrangler 4xe will (or the potential Land Cruiser EV might). It might not pin you to your seat with raw, adrenaline-pumping acceleration like the Mustang Mach E or the Tesla Model Y. The ID.4 will carry you and up to 4 others in a comfortable, reliable, economically and ecologically friendly package that has quite the handsome exterior. I applaud Volkswagen for that.

Toyota vs Tesla: Which Stock To Buy These Days
For Some Former Daimler Managers Daimler Is Authority, While Tesla Is Like a Startup
END_OF_DOCUMENT_TOKEN_TO_BE_REPLACED