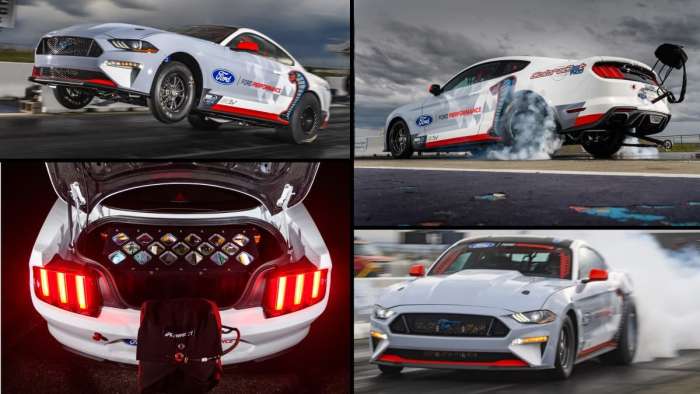 Called the Cobra Jet 1400 because it’s pushing more than 1400 horsepower to the wheels, the amazing modifications done to the Ford Mustang platform prove that an electric Mustang has truly astounding motorsports potential. This electric dragster had to be toned down to stop itself from melting tires too quickly.
Advertisement

Teased at in April of 2020, the Cobra Jet 1400 is a one of a kind electric drag car that is built from a Ford Mustang and is powered by 4 humongous electric motors. The intense torque and power output of which puts most ICE powered Mustangs to shame. Ford even notes on their own media page that “That’s equivalent to the combined output of more than three 2021 Mustang GT V8 engines.”

In September, we got to see some impressive passes made by the drag car; with one pass of the quarter-mile completed in an astonishing 8.27 seconds. This pass was completed with a top speed of 168 miles per hour; a number that’s nothing to sneeze at. The eCOPO Camaro, Chevrolet’s purpose built electric drag car has been noted as managing impressive near-9-second passes, but the Cobra Jet 1400, delivering all 1500 of it’s electric horsepower and 1100 foot pounds of torque to its rear tires, just squeezes past into the low 8 second range. 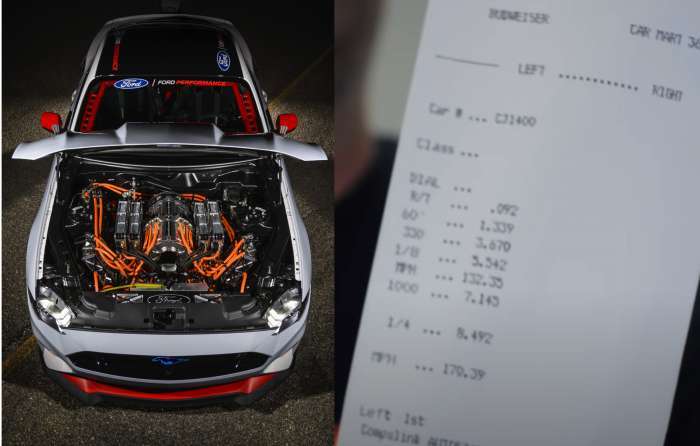 While the eCOPO Camaro was fitted with a 3-speed automatic transmission, Ford hasn’t explained exactly what’s pushing the power from those 4 motors to the two tires in the back, though there’s mention of shifting in Ford’s “Behind The Build” video, so there’s an implication of at least some kind of automatic transmission.

The electric motors that rocket this Mustang down its merry way are as quiet as pretty much any EV can be, despite being powered by a battery and inverter system capable of cranking out 2.1 Megawatts of power. The motors themselves are limited to a maximum speed of around 10,000 rpm, which is faster than the redline on most American Muscle Cars’ ICEs, but in the ballpark of many Italian Supercars.

Ford hasn’t released an official “top speed” for the Cobra Jet 1400, but then, every run is different and this Mustang was purpose built for the quarter-mile. Even supercars, like the Bugatti Veyron or Chiron don’t break 200 miles per hour in this short distance, though one electric drag racer, Steve Huff, proved that it was possible back in May of 2020, with a scorching 7.52 second, 201.07 mile-per-hour pass in his 2,400 horsepower vehicle. Prior to this pass, even racing legend Don Garlits didn’t think that electric cars were at the point where they’d hit 200 miles per hour, though the Genovation GXE, an EV based off a C7 Corvette had hit 210 miles per hour in 2019.

Even still, the 200 mile per hour mark is out of the Cobra Jet 1400’s reach for the quarter-mile for right now, but with more tuning and the appropriate application of science, who knows what sort of numbers we might see from this silent, two-door, track-slaying pony car? Watching Ford’s professionals test this baby on the Dyno, and seeing the molten rubber stuck to the bumper made me squeal with delight the first time. The instant wheelie that the Cobra Jet 1400 pulls at the beginning of its passes just leaves me in awe.

Ford has promised us an electric Mustang in 2023. No, not the bulbous Mach E, but a real, honest to goodness Mustang. I can’t wait to see what the final car and performance will turn out as, because watching what they did with the Mustang Lithium and the Cobra Jet 1400, I’m sure the electric Mustang will be sure to excite and amaze.

Will Ford release its pony car with anything like the 1500 horsepower output of the Cobra Jet 1400? It’s unlikely. But I’d guess that Ford, wanting to keep up with BMW’s i4M, will provide the Mustang’s electric iteration with close to, if not over 500 horsepower. The Mach E is putting out 459 in its current rendition, so it wouldn’t be hard to believe that the Blue Oval would try to crank a few more ponies out of its first REAL EV Mustang.

DeanMcManis wrote on May 19, 2021 - 5:17pm Permalink
This is a solid effort by Ford, creating a competitive BEV drag monster. I think that Ford should have come out with the real Mustang BEV this year, right along with the Mach-E, but maybe 2023 will debut a new platform for the Mustang, so we will have to wait. The Mach-E GT is clearly going to be a great accelerating vehicle, so hopefully they will bring that speed to the BEV Mustang, while keeping their good handling and braking capabilities intact.