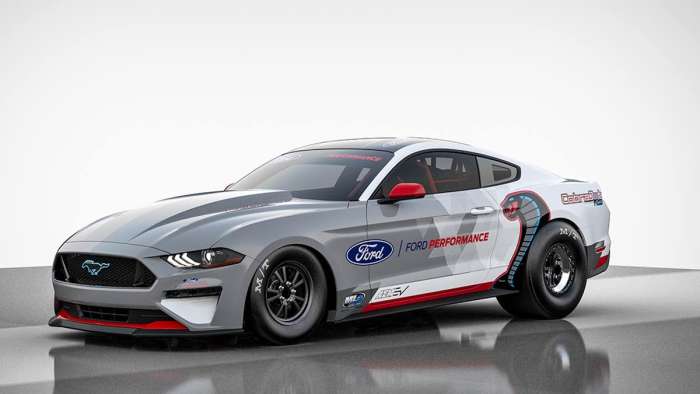 There’s been plenty of hullabaloo about electrifying the Mustang. Ford has made it abundantly clear that the future includes electrification across the entire product line, which includes the Mustang.

They went so far as to rattle the Mustang world last year when they introduced the Mustang Mach-E, an all-electric all-wheel drive crossover. I’ve said plenty about that vehicle, which in my opinion is not a Mustang.

But that opinion has nothing to do with electrification. I’ve even gone so far as to say that an electrified pony car would be amazing. Ford Performance has made my point loud and clear. Well, maybe not loud but definitely clear with the stealthy, torquey and fast prototype Mustang Cobra Jet 1400.

The 1400 in the name represents the number of horsepower this pony car gets. Yes, you read that right, 1400 horsepower. According to Ford, it’s projected to crush the quarter-mile in the low-8-second range at more than 170 mph.

The battery-powered Mustang Cobra Jet 1400 prototype is purpose-built and projected to deliver over 1,400 horsepower and over 1,100 ft.-lbs. of instant torque to demonstrate the capabilities of an electric powertrain in one of the most demanding race environments.

“Ford has always used motorsport to demonstrate innovation,” said Dave Pericak, Global Director, Ford Icons. “Electric powertrains give us a completely new kind of performance and the all-electric Cobra Jet 1400 is one example of pushing new technology to the absolute limit. We’re excited to showcase what’s possible in an exciting year when we also have the all-electric Mustang Mach-E joining the Mustang family.”

Ford says that the Cobra Jet 1400 will honor the original Cobra Jet that dominated drag strips in the 1960s. The 60s era Cobra Jet Mustang is still one of the most beloved and highly collectible cars in Mustang heritage.

Before that, catch a sneak peek starting this Sunday, April 26 by watching MotorTrend On Demand’s “Hard Cell”, a showcase of electric vehicles pushing innovation boundaries. 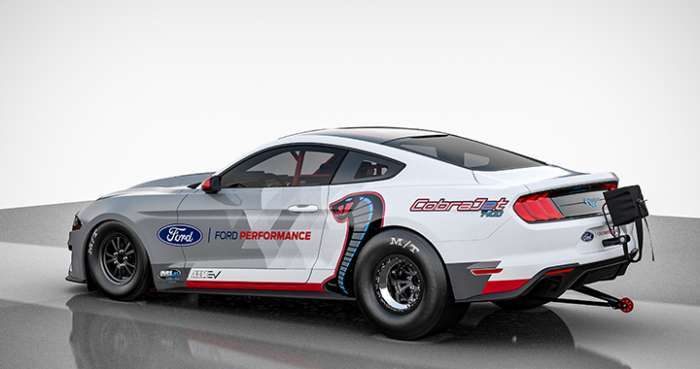 What Is The Future Of Mustang?
I often get asked if Ford will continue the Mustang. My answer is always a resounding yes. Mustang is now Ford’s last remaining car that they manufacture. And there’s another generation of Mustang being developed for the 2022 model year.

We know the GT350 Shelby is being discontinued, but that’s not surprising. So too, is the Bullitt, but that Mustang was only meant to be a special edition with a short run. Replacing these two collectible Mustangs will be a new Mach 1.

The new Mach 1 needs to be a lot like this special Cobra Jet. No, I don’t mean electric. It needs to be fast, but the Mustang purists will want it to be a gasoline-powered V8 beast. No real details are available about the Mach 1. So we will all wait in anticipation of this car and hope that Ford executes it.

2022 Ford Mustang Hybrid Coming
Also, as I reported last week, it appears that part of the seventh-generation Mustang platform will be a hybrid Mustang. Before you cringe, the details appear to be that this could be something very interesting that would appeal to many Mustang enthusiasts.

The 2022 Ford Mustang Hybrid could have a V8 engine, along with an electric motor that could push out a lot of horses. Likely not the insane 1400 hp of the Cobra Jet 1400, but certainly 450-500 horsepower would not be out of the realm of possibility.

The more controversial portion of this potential hybrid pony car is that it may also come with all-wheel drive. I’m personally a fan of AWD, but many of the purists believe that a Mustang should only be rear-wheel drive. I respect that, and would assume that the AWD could be turned off or would just be an option to add for those that like AWD.

Mustang Mach-E
Then there’s the Mustang Mach-E. It’s tiresome continuing to write the same thing about this crossover. My opinion won’t be changed that the hallowed Mustang name should have never been put on a crossover.

All that being said, I did get a chance to ride in the Mach-E and as I expected it was torquey and fast. The Mach-E GT would be intriguing from a performance standpoint. Actual sales orders for the Mach-E begin next month in May.

It will be interesting to see if the interest is there for the Mach-E or if that crossover loses much of its initial interest due to the reveal being last fall, and everything that has transpired in the world since then.

Will unsure buyers still put their money down to order the all-electric crossover? Time will tell.

The Cobra Jet 1400 is nothing more than a prototype. It showcases what Ford’s engineers can do with electric. It will serve as a way for Ford to market electrification for the Mustang brand. At 1,400 horses and 1,100 ft.-lb. of torque it does show that Mustang enthusiasts, who like power and performance should not fear electrification. But if you want that growl, as many do, you will be disappointed in this silent Mustang dragster.

Tesla-Funded Research Reveals One of The Biggest Mysteries of EV Battery
Tesla Tesla Buyer Nets a Whopping $12,000 Discount After Asking for Reduction
END_OF_DOCUMENT_TOKEN_TO_BE_REPLACED