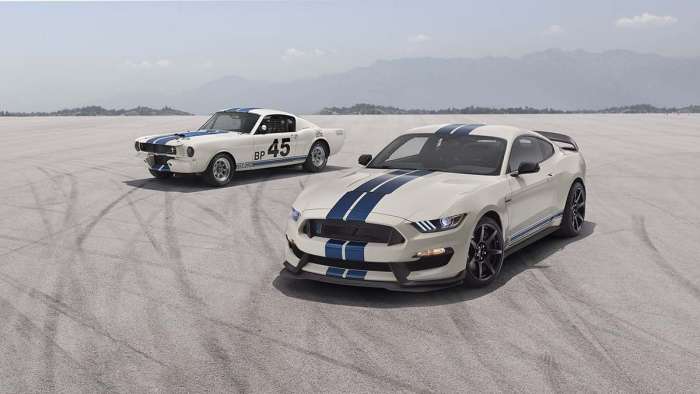 The GT350 Shelby Mustang To Be Discontinued

Ford will cease production of the 2020 Mustang Shelby GT350 to make room for 2021 Mustang Mach 1. The GT500 Shelby Mustang will continue, however.
Advertisement

One of the more surprising bits of news that came out late yesterday, that I hoped was an April Fool’s joke (it’s not a joke), was that Ford would stop making the Shelby GT350 Mustang. Though Ford has not made a formal announcement, as first reported by The Ford Authority as well as a source within Ford have confirmed it to be true.

Both the Shelby GT350 and the GT350R will no longer be produced. Although it’s sad, it also makes sense from a business perspective.

Ford has already made it clear that their business plan does not include cars. Rather, the Blue Oval will focus on trucks and SUVs. Let’s just be glad we still have the GT500 and the standard Mustang still with us.

Losing the cherished pony from the Ford stable would be an absolute tragedy to Mustang heritage. For the record, there are no plans to discontinue the Mustang.

Of course much has been written about how Ford has diminished the name and heritage of Mustang by dropping that badge on the Mustang Mach-E. But rather than harp on that (I’ve made my stance very clear and thousands of others agree with me), let’s take a look at the Shelby Mustang GT350 as it compares to the GT500.

The GT500 has supercharged aspiration to only natured aspirated of the GT350. The tale of the tape shows the GT500 is the clear winner and is likely one key to why Ford will eliminate the GT350.

Price is always key, and this is the area that’s surprising. The GT350 was a more affordable option for true muscle-car enthusiasts with an MSRP of $60,440 compared to the $72,900 starting price of the GT500. That’s a significant difference in price, and it could leave some enthusiasts priced out the market. 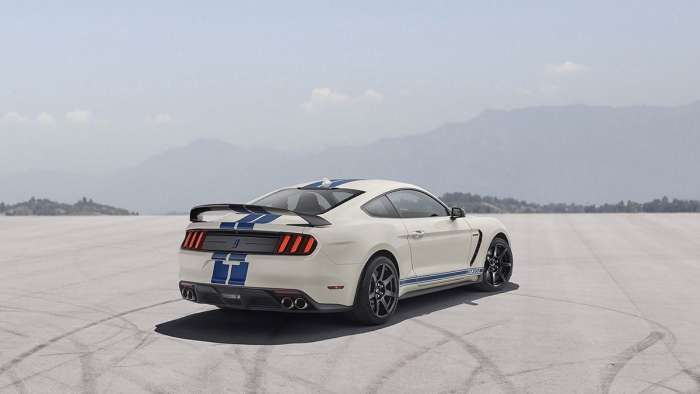 What Does The Future Hold For Mustang?
As mentioned, there’s been no talk of discontinuing the full Mustang lineup. In fact, I was the first to report here at Torque News that Ford was bringing back the Mach 1 for the 2021 model year. So there’s clearly some investment still going into America’s pony car.

For 2021 and beyond, Ford will offer the Mustang with Ecoboost, GT and the Shelby GT500, plus the Mach 1. That’s a pretty impressive stable for Ford. Of course, they will launch the Mach-E as well, but in my opinion, that all-electric crossover is not a Mustang (#NotAMustang).

As a Mustang historian and author, I’m quite protective of the Mustang name. I don’t apologize for that. The Mustang is an automotive icon.

As for the GT350 being discontinued, I won’t throw a tantrum over it. The enthusiasts who found the more affordable GT350 appealing may baulk at being asked to shell out another $12,000 extra for the superior GT500. I’ll let the market dictate whether this is a mistake by Ford. I do understand the move.

Speaking of the GT350, I recently wrote a story about the Hennessey Venom 775 F-150 destroyed the GT350 on the track. Be sure to check that story out.

What do you think about the loss of the GT350 from the Ford lineup? Will you miss it? Do you understand and agree with the move? Leave me a comment and let me know your take.

Bob Johnson wrote on April 2, 2020 - 1:26pm Permalink
I always loved the Mach 1. I think it will be awesome to have it back. The Shelby should be THE Shelby, not THE Shelby, and a watered down version.
Jimmy Dinsmore wrote on April 3, 2020 - 8:37am Permalink
Will be interesting to see how the Mach 1 goes.
Jon K wrote on July 22, 2020 - 7:43pm Permalink
The GT350 is a track focused mustang and the GT500 is a drag car. The GT350 is an unbelievable machine. Designed after the 458 Italia, The flat plane crank enables it to redline at 8250rpm. It’s also the most powerful, N/A engine put in a production car.
digitaldoc wrote on April 2, 2020 - 11:32pm Permalink
Will kind of miss the GT350 as it is the more affordable, and driveable of the top Mustangs. The GT500 is more of a supercar, and not exactly a daily driver, while the GT350 would better fit that role. C'est la vie!
Jimmy Dinsmore wrote on April 3, 2020 - 8:37am Permalink
Hopefully they don't overprice the Mach 1
DeanMcManis wrote on April 3, 2020 - 1:07am Permalink
The GT350 was an impressive performance car, being Ford's halo Mustang until the new GT500 took it's place on the throne. The nice part is that previous recent Shelby GT500s were built more in the spirit of the Hellcat Challenger, with decent handling and braking, and blazing acceleration in a straight line. But the GT350 could run against more balanced performers like the BMW M3 and Camaro ZL1. Happily that circuit racetrack DNA from the GT350 made it into the GT500, combined with insane power to make a super Mustang that is better than the sum of it's parts. The Mach 1 has always been a cool model, but it is not replacing the GT350, the GT500 is. The Mach 1 is replacing the Bullitt, which was another cool factory specialty Mustang.
Jimmy Dinsmore wrote on April 3, 2020 - 8:38am Permalink
Agreed the Mach 1 won't mirror the GT350. It will have its own personality.
Mike Pinnow wrote on April 9, 2020 - 5:40pm Permalink
I am the lucky and extremely satisfied owner of a 2018 Orange Fury GT350 with justa over 2000 miles on it. Before this car I owned an M4 and an M1 before that. The GT350 is just a phenomenal car. The Voodoo engine is the most visceral engine I have ever owned that is anywhere close to stock. The ability of it to rev and just keep building thrust is totally addicting!! I understand why Ford is doing what they are doing but for me a manual transmission is the deal breaker. The GT 500 is a great car but I will happily keep my naturally aspirated manual transmission with the most beautiful exhaust sound I have heard in a stock engine. I also have a 2018 Focus RS. Another amazing car Ford has decided to discontinue.
Jimmy Dinsmore wrote on April 10, 2020 - 12:36pm Permalink
I've not driven the GT350 but I've heard it's even better for true performance driving than the GT500.
Sandy wrote on April 16, 2020 - 8:48pm Permalink
BIG mistake by Ford...and just another one in a long list. You don't even have to say Ford or Shelby when talking about the GT350....all you need say is....GT350...everyone knows!!!!
Jimmy Dinsmore wrote on April 17, 2020 - 1:52pm Permalink
They still have the GT500. I don't think most people are aware how big in financial trouble Ford is.
Bryan Banks wrote on April 28, 2020 - 9:36pm Permalink
Ford didn’t kill the GT 350, the dealers did it. Dealers tried to markup the price to such a level, it ruined the sales. Check dealers for sale, lots of2019’s for sale, priced too high, so they did not sell. If dealers don’t sell them, Ford won’t make them.
Frank Cesario wrote on April 30, 2020 - 1:48pm Permalink
I had no idea that Ford was discontinuing the GT350. Fortunately, I bought mine on March 17, 2020. Because of the coronavirus pandemic, sales were slow and I picked mine up for no markup over MSRP. I was actually considering the GT500 at first, but I really wanted a manual transmission for the pure driving experience. Sure, the GT350 has 200 less horsepower, but it still is the most incredible car I’ve ever driven! The GT350 is a collectors item, especially now that it is discontinued. I hope to be buried in mine!
Rob wrote on May 17, 2020 - 11:22pm Permalink
I wonder what this does to the value of my order in production GT35R Heritage Edition.
Jimmy Dinsmore wrote on May 19, 2020 - 8:21am Permalink
I would think it would increase its value.
Joey Placido wrote on October 2, 2020 - 3:52pm Permalink
It will increase its value.
Jay Conner wrote on August 27, 2020 - 3:02am Permalink
If you truly believe the only reason people buy a GT350 is because it’s more affordable than a GT500, then I don’t know what to say to you other than you’re not the Mustang expert you claim to be. Any jerk-off can slap a supercharger on a Ford modular truck motor and get 600 HP at the wheels. That’s easy — and that’s exactly what the GT500 Trinity motor was. But to build a naturally aspirated flat-plane crank motor with 14mm of valve lift and an 8250 rpm redline from a purpose-designed cast aluminum block... now that’s a thing of beauty. The Predator motor in the current GT500 is a cross-plank crank adaptation of the Voodoo motor, and not nearly as impressive. It’s lower redline means a shorter power band, which sucks on the track. Sure it produces more HP at peak rpm, but unless your local track happens to be the Daytona Super Speedway, you’ll never use it. Additionally, no one wants a supercharger on a track car. They heat soak and cause all sorts of problems. So the GT500 is a effectively a garage queen for people with small dicks and fat wallets. And the upcoming 2021 Mach-1? It’s a GT350 with a truck motor (Coyote). I don’t hate it... but it’s no GT350. It’s not so much the loss of the GT350 that’s a kick in the teeth, it’s the loss of the 5.2 liter Voodoo motor in the lineup.