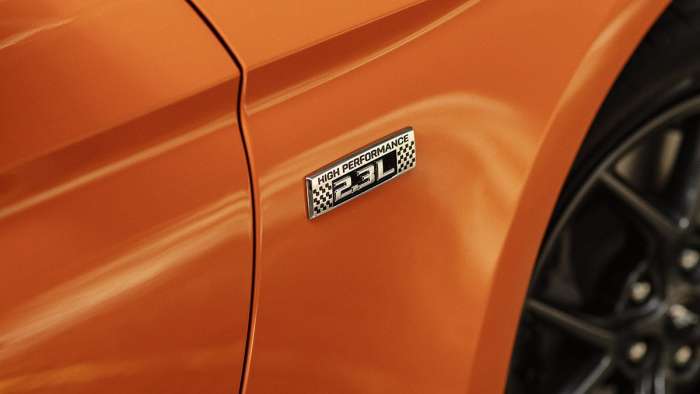 Four-Cylinder Mustangs Have Plenty of Muscle

Ecoboost Mustangs are part of the pony car’s future and should be embraced by all enthusiasts. Four-cylinder technology has created significantly more power than previous generation’s four-cylinder Mustangs. Don't hold the mistakes of the past against Ford as they try to keep the Mustang viable and affordable to a new generation.
Advertisement

“Only real Mustangs have V8s!” That seems to be the viewpoint of many when it comes to muscle cars and certainly when it comes to muscle cars. And let’s make one thing clear, the V8 engines in the Mustang GT350 and GT500 are amazing and fast and just so much fun. But for the average person, or a more casual Mustang enthusiast, Ford’s new turbocharged four-cylinder Ecoboost technology has revolutionized their performance and allowed for good performance along with good fuel economy at a more affordable MSRP.

Ford also (hopefully) learned from their previous mistakes of the past with four-cylinder Mustangs. I’m of course talking about the much-maligned Mustang II, the second-generation, puny-powered Mustang that Ford produced from 1973-1978. Smack in the middle of a fuel crisis, and with new leadership (gone were Lee Iacocca and Hal Sperlich), Ford decided to get rid of their big V8 engines and replaced them with a V6 six cylinder and an even more shocking 2.3-liter four-cylinder engine (with no turbo).

The four-cylinder engine found in the Mustang II made only 88 horsepower 116 lb.-ft. of torque. The V6 only produced 106 horsepower so it wasn’t much better. The muscle car era was over thanks to the Mustang II and this business move. The manual transmission version had a 0-60 mph time of 13.6 seconds. Wow! That is absolutely sloth-like. However, it did achieve its main purpose which was fuel efficiency with an EPA rating of 19 mpg/city and 26 mpg/highway. By the last year of this short-lived Mustang generation, the 1978 Mustang II had increased fuel economy even further, and managed slightly better output numbers, although the increase was minimal.

For Mustang heritage purposes, the Mustang II is considered the black sheep of the Mustang family, although there are some loyalists to it. Ford Motor Company accomplished what it intended to do, during a volatile in our country’s history. They decreased power and increased fuel economy.

Certainly Ford learned a valuable lesson from this time. For the model year 1977 and 1978, the Chevy Camaro outsold the Mustang for the time in this rivalry’s history. Chevy introduced the more powerful Z28 Camaro which shamed the Mustang in power and performance. It clearly indicated that while fuel economy was important, Mustang enthusiasts wanted performance. This idea would simmer for a couple decades until Ford introduced the sixth-generation Mustang, once again with a four-cylinder engine.

The year was 2014 and Ford was set to launch a new generation of Mustang (for model year 2015). The looks were sharp and familiar with hints of the classic Mustang from the 1960s, but also it meant the return of something that might make Mustang enthusiasts cringe – a four-cylinder engine. The reason was sound, as Ford Motor Company made the global strategic decision to sell the four-cylinder Mustang in both Europe and Asian markets and the smaller, more fuel-efficient engine kept them from getting taxed on V8 engines. As such, the turbocharged Ecoboost engine was introduced into the Mustang across the globe.

The 2.3-liter turboboosted four-cylinder engine made 310 horsepower which was actually more than the corresponding V6 engine made, but obviously less than the 5.0 engine found in the GT. The torque was even more impressive with 320 lb.-ft. compared to 280 lb.-ft. found in the V6. Fuel economy numbers were even more impressive with a rating of 21 mpg/city and 32 mpg/highway which again blew away the V6 engine which was rated at 17 mpg/city and 28 mpg/highway.

Ford seemed to have created a perfect combination of performance and fuel economy. If only they could’ve cracked that code for the Mustang II, it might’ve been more impactful in Mustang history.

Is a four-cylinder Mustang a good option?

In addition to the gains in fuel economy and saving you money at the pump, there are other benefits to the Ecoboost four-cylinder Mustang. But it will require putting your machismo aside and truly considering the benefits. The 2020 Mustang with Ecoboost can also receive Ford’s High-Performance Package which increases the horsepower to an impressive 330 hp. It also adds more torque and has a nice exhaust tune giving this four-cylinder engine somewhat of a growl.

It’s also quite tunable which makes the enthusiast who loves to customize and tinker quite happy. The Ecoboost Mustang has a lot of versatility in this regard and can become quite a high-performing pony car when it’s all said and done. 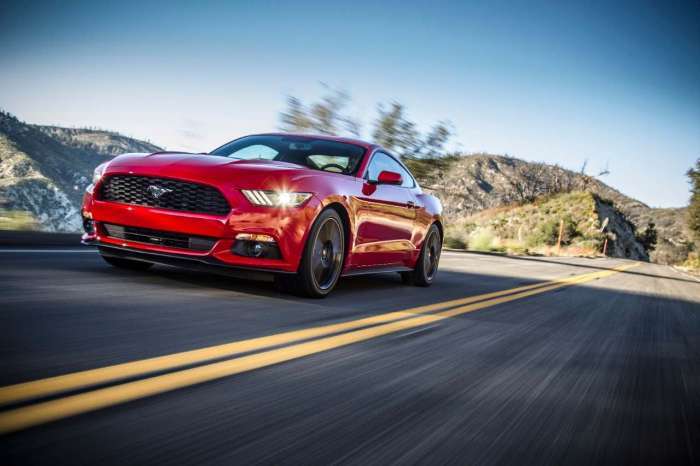 Perhaps the most significant reason why a four-cylinder Mustang is legitimate is the price. Basic trim Ecoboost Mustangs start under $30,000 for the 2020 model year. Conversely the V8 GT trims go north of $40,000 easily with the high-performance ones going even significantly higher. It’s important that a younger generation of consumers embrace the Mustang, and this makes it affordable to them while also giving them ample power and performance to catch on to the Mustang passion.

As such, all Mustang enthusiasts should embrace the four-cylinder technology as it could be the future of the Mustang, and will introduce a new generation to the Mustang. As Ford scrambles to figure out what the future holds for (Mustang Mach-E??) Ecoboost will continue to be a major part of that future. And that is a good thing.

Jimmy Dinsmore has been an automotive journalist for more than a decade and been a writer since the high school. His Driver’s Side column features new car reviews and runs in several newspapers throughout the country. In addition to being a nationally syndicated automotive columnist, Jimmy has been published in a compilation book about children growing up with disabilities, where he shared his own very personal experience. He is also co-author of the book “Mustang by Design” and “Ford Trucks: A Unique Look at the Technical History of America’s Most Popular Truck”. Also, Jimmy works in the social media marketing world for a Canadian automotive training aid manufacturing company. Follow Jimmy on Facebook, Twitter and LinkedIn. Follow the most of Jimmy's Ford news coverage at Torque News Ford for daily stories.

Digitaldoc wrote on February 3, 2020 - 12:43pm Permalink
Your history is missing the Mustang SVO, a 4 cylinder turbo sold 1984 to 1986.
Jimmy Dinsmore wrote on February 4, 2020 - 8:35am Permalink
You are correct, that SVO totally slipped my mind. It was a sneaky good Mustang.
DeanMcManis wrote on February 3, 2020 - 4:37pm Permalink
Yeah, that was the first thing that also came to my mind was Mustang SVO Special Vehicle Operations) The 4 cyl turbo mustang actually made MORE HP than the V8 in 1986. The Fox body Mustang did a great job of erasing the bad memories of the Mustang II mess, and by 1986 both the 4 cyl turbo SVO Mustang and beefed up V8 were really competitive performers. They had 700HP turbo 4 race Mustangs that tore up the racetrack. In fact the success of the SVO Mustangs and collaborations with Mazda lead to the decision to cut the V8 model out of the Mustang. But die hard fans screamed foul and kept the V8 heart in the Mustang. The new Mustang has put on some serious weight since then, but the 4 cyl turbo engine evolved in drivability and performance. The 1984 SVO Mustang rattled the industry with (190HP, later 205HP) and now the Mustang EcoBoost High Performance package gives us 332HP/350TQ, and with the Handling Package it provides real performance value for around $34K, which makes a suitable rival for a WRX or GTI, and of course it's a strong runner against the 4 cyl turbo Camaro, and heavier V6 Challenger, nibbling at the V8 model's performance and importantly shaving weight compared to the V8 models which helps in providing good braking and nimble handling.
Michael wrote on February 3, 2020 - 7:27pm Permalink
The EcoBoost is a super fun motor. I had one in 2016 I owned. But the argument of affordability goes out the window. I also own 2012 with the cyclone v6 which is also fun to drive. And the v6 could be modified easily and stickered out about 4K less than the 4 cylinders. $30k base is not affordable to a young adult starting out.
Mark Lally wrote on February 3, 2020 - 9:18pm Permalink
The mustang II did not include an inline 6 engine and the mustang II did not cause the end of the muscle car era, it was a result of the end of the muscle car era.
Jimmy Dinsmore wrote on February 4, 2020 - 8:35am Permalink
It should read V6, not inline six. I saw that and fixed the error. Thanks for the input.
Jimmy wrote on February 3, 2020 - 10:22pm Permalink
Yes it had a V6 you’re correct
Mark wrote on September 23, 2021 - 9:31pm Permalink
My wife had a 200 cid Sprint 6, Automatic '65 Mustang when we got married. The only thing Sprint about it was the sticker on the air filter housing. It rode and drove nice, but with very modest acceleration. If you made it to about 80 mph, it would shake horribly. Skip nearly a decade, I picked up a '74 Mustang II, Mach I, V6, 4 speed. It was reasonably quick compared to other smog equipment choked engine's of the day. I liked it far better than the '65. We've had a couple V8 Mustangs through the years. Never really considered myself a Ford man, but I did/do love the Mustang. Y'all are welcome to the more muscular versions, I don't care for the ride quality of the GT.
DeanMcManis wrote on September 24, 2021 - 10:29am Permalink
Wow, a fan of the Mustang II. That's brave. Well, we each like what we like, and that's fine. I had a '92 Mustang LX convertible, in Performance Red with a V8, 5-speed manual, white top and interior. It was a great car!