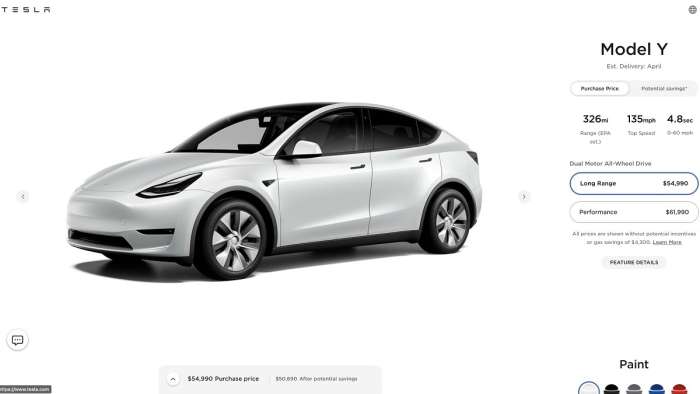 Despite setting record delivery numbers, Tesla seems to be struggling to meet the exploding demand for its vehicles. And earlier today, the EV maker increased the prices of most variants of its vehicles.
Advertisement

Tesla has been enjoying a booming demand for its vehicles. Some Tesla variants such as the Standard Range Plus Model 3 have delivery dates as far out as the second half of 2022.

This might seem in line with the broader automotive market as chip shortage and supply disruptions caused by the Covid 19 pandemic have forced auto OEMs to significantly cut back production.

However, through hard work and ingenuity, Tesla has been able to navigate the chip shortage relatively unscathed. And rather than decreasing production like most automakers, Tesla has been posting record production and delivery numbers.

In the third quarter of 2021, Tesla said it delivered 241,000 vehicles for a 65% growth year over year. However, despite Tesla growing production at a rapid rate, the automaker still seems unable to meet the exploding demand for its vehicles.

And as a result, in an update to the company’s online configurator this morning, Tesla has increased the prices of almost all variants of the Model 3 and Model Y. On the other hand, Model S & X prices remain unchanged, however, that is following a $10,000 price increase earlier this year.

The Long Range Model 3 remains unchanged at $49,990 that is however following a $1000 price increase the vehicle saw this July. These are just the latest prices increases for the Model 3 however since the start of this year prices of some variants of the Model 3 have increased by $6000.

The next vehicle to get the price bump is the Model Y. The Long Range Model Y saw its price increase by $1000 and now starts at $55,000. Having recently discontinued the Standard Range Plus Model Y, entry to Tesla’s affordable crossover now sits at $56,200 including the mandatory $1,200 doc and delivery fee.

The Performance Model Y also saw a similar $1000 price increase and now begins at $62,000. The price changes to the Model Y just this year add up to increase the starting price by as much as $5000.

Tesla updates the company’s prices often and we will be sure to keep you updated as Tesla adjusts its prices. Make sure to visit our site torquenews.com/Tesla regularly for the latest information.

So what do you think? Will the latest price increases curb the insatiable demand for Tesla vehicles? Also, how do you think the price changes will affect Tesla’s profitability? Let me know your thoughts down in the comments below.

For more information check out: Elon Musk Reiterates Tesla Could Be Bigger Than Apple As Q3 Comes To A Close Also, see Answers to Questions for the Tesla Shareholder Meeting, 2021

John Goreham wrote on October 6, 2021 - 10:33am Permalink
Can you detail the lowest price Model 3? When I use the configurator the least expensive model including the mandatory Tesla fee for delivery is $43,190. That is with the cheaper wheels you have to opt for or it's another $1,500.