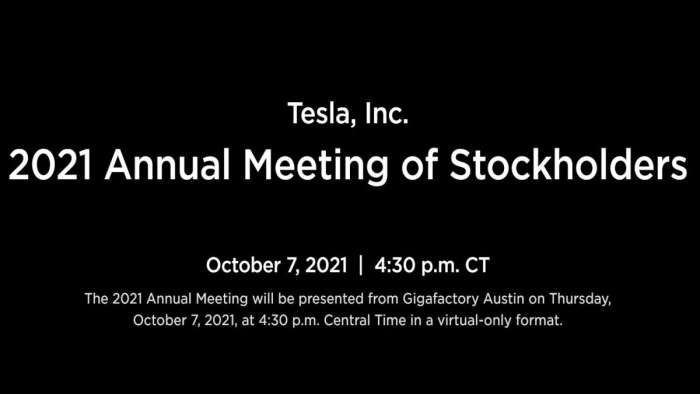 Answers to Questions for the Tesla Shareholder Meeting, 2021

Tesla has a list of questions that owners of Tesla stock are wanting answered. When Tesla has their annual shareholder meeting on October 7th, 2021, many of these will likely be addressed, especially those that have the most votes and share %. I'm going to answer the top 10 questions for you!
Advertisement

UPDATE! The meeting just happened. You can read Elon's answers to the shareholder questions on my Twitter Feed Here.

You can find a list of the latest questions shareholders want answered at the next Tesla shareholder meeting on October 7th, 2021 at this website.

I'll go ahead and give you answers ahead of time. We'll see how accurate I am when it comes time for the shareholder meeting.

Does Tesla plan to offer any dividends to its shareholders in next 2 years?

The answer is very easy for this one. Tesla will not offer any dividends in the next 2 years. However, as they continue to become more and more profitable, I believe they will offer dividends to shareholders after 2025, once they have more money than they know what to do with.

Answer: In short, the answer is no, Tesla won't offer dividends to shareholders in the next 2 years. But I believe they will sometime after 2025.

Is there any guidance on when Cybertruck production will begin and at what rate the ramp up will happen?

If Tesla decides to build the CyberTruck with FSD Hardware 3.0, then I think they could release them in the first half of next year - but it wouldn't be until the 2nd quarter. Tesla is focused on getting the Model Y released from Giga Austin, Texas first. I don't see Tesla releasing the CyberTruck earlier than the second half of 2022 and I don't see them building it with FSD Hardware 3.0. They're going to start production with the new hardware.

Answer: Tesla will start CyberTruck production in the second half of 2022, probably around August or September. The ramp will be similar to the Model S Plaid, but less, starting with an event and the first 25 deliveries. After that, ramping to 750 the first couple months, and then more and more after that until volume production. But this will take longer as it is a completely new vehicle and bugs and issues will need to be worked out.

With $TSLA stock price back into the $700-$800 range, and likely heading higher, would you consider another split to allow retail investors to continue adding shares at a decent, per share, price?

I believe there could be a split in the works, but it won't likely happen until next year when Giga Berlin, Giga Austin, Texas are ramping production, and the 4680 batteries are being used.

When Elon Musk Tweeted this Tweet, he wasn't saying that Tesla stock price wasn't worth the price it was and that it should decline in price. He was saying that the price was too high to buy individual shares and that a stock split would help make the stock more accessible to regular investors - even though that's not what he said directly here, I think that's what he meant.

Answer: I think Tesla will say that they will consider a stock split if the price keeps increasing. If it starts going well over $1,000, I think we'll see a split announced and it could be sometime in August of 2022.

Can Tesla provide Quarterly update on Energy business along with automotive reporting deliveries and production?

I like this question a lot. Tesla does a good job reporting on its automotive business. It says how many models of cars were sold, what the margins were, and gives good guidance for the future. Tesla also gives a delivery report a few weeks ahead of earnings for each quarter.

The energy business isn't as well established as the auto business, but I think sharing deliveries makes a lot of sense and shouldn't be too difficult. This is not much to ask for investors in $TSLA.

Answer: Tesla will take this question and consider it and will also say that it is a reasonable request. I can picture Elon Musk (or whoever is on the meeting) saying something like, "That seems reasonable and we'll take that into consideration."

Are we going to see 4680 battery cell this year in Texas? If not what part of production is holding up?

This is a good question. We haven't had a lot of information on the status of the 4680 battery cells except that they are progressing along. I'm not aware of any timeline that Tesla has given for their release.

Toward the end of July, 2021, Tesla said there is still some work to do. I think that means there's a lot of work to do and I don't expect to see the 4680 battery cells released this year. I do believe they'll start to get introduced in the first half of next year, but it won't be all at once. They will need to be integrated properly into the production process.

Tesla may also be getting 4680 batteries from manufacturers in China. I personally want to hear details about this, but I think Tesla will say it's too early to report on that.

Answer: Elon Musk (or whoever is on the meeting) will talk about how production is hard and prototypes are easy. The 4680 batteries still need some work and will probably be ready in the first half of next year. It will take even longer for China suppliers - probably 2nd half of 2022 or Q1, 2023.

Any updates on the timeframe of when the Cyber Truck or the Roadster will be for sale?

This question is sort of a duplicate to an earlier CyberTruck question. I think the answer will be very quick and simple for this.

When will Tesla accept Dogecoin as payment for vehicles?

I think Tesla will accept Dogecoin eventually, but it will have to have shown some stability in price and usage.

Answer: Tesla will start to accept Dogecoin once we've seen some price stabilization and are confident that the network can handle the transactions properly. Tesla will also need to make sure there is no regulation problems with Dogecoin.

Is there any chance Tesla may implement a dividend payout in the future?

This question was sort of asked earlier, but it mentioned the next 2 years. I like this question better because it doesn't constrain the timeline of the dividend. The answer is pretty simple here:

Answer: Right now Tesla has plenty of uses for its cash, which include new vehicles, new giga factories, the Tesla energy business, Tesla bot, and more. But, if Tesla were to reach a point where it has more money than it knows what to do with, a dividend most certainly makes sense. I don't see this happening anytime soon - after 2025.

When will the Model S | X use the new 4680 battery cells & updated pack? How soon can we see production coming out of Giga Texas | Giga Berlin??

I don't think the Model S and Model X will use the new 4680 battery cells in 2021. It will probably be the 2nd half of 2022 or Q1, 2023 - per the answer to an earlier question about the 4680 cells. The priority will be the Model Y and CyberTruck - and maybe event the compact Model 2 before the Model S and Model X get the cells. It all depends on how quickly the quality control and production ramp for the 4680 cells happens.

Answer: I don't see Tesla using the 4680 cells for the Model S and Model X until late 2022/early 2023. Other vehicles will take priority like the Model Y from Giga Texas and Giga Berlin, along with the CyberTruck.

Are we on track for FSD beta 10.2 tomorrow night? Will this be the single stack update? What's the rollout plan going forward for new FSD beta testers? How long is it expected to take to open beta up to anyone with an 80% safety score or higher?

Answer: We are on track for FSD beta 10.2. It will not be a single stack update. We'll wait until 11.0 for that. The rollout plan for new beta testers is 1,000 per week depending on safety score. We'll need to watch how it goes with each batch of users. I'm not sure opening up the beta to anyone with an 80% safety score or higher is the right way to do the rollout. We'll start with those with the highest safety scores first. Based on behavior, we'll determine if an 80% safety score means we can release to more people at once.