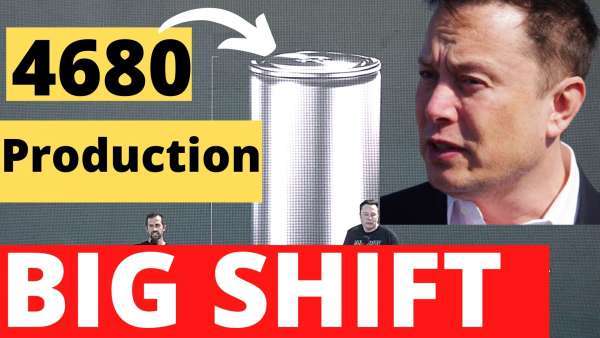 For the production of the high-performance batteries that are installed in the electric cars of the industry pioneer Tesla, the company, headed by Elon Musk, relies on several partnerships. With suppliers include not only the Japanese electronics giant Panasonic also the largest Chinese manufacturer of lithium-ion batteries CATL and LGsBattery division LG Energy Solution. The e-car manufacturer also relies heavily on recycling in the production of its batteries. By its own account, the company's purpose is to help the world make the transition to sustainable energy. In addition to expanding the global charging network, Tesla is also relying on the further development of its own batteries to achieve this goal, so that they can score points with greater ranges.

Now Tesla wants to have batteries in 4680 format produced for itself soon, as a report by the Chinese online portal "36 Krypton" shows. This is a new technology that could go into mass production in 2023.

The production of these 4680 batteries for Tesla's electric vehicles will apparently take place in China, which is why the company is looking for cooperation partners in the Middle Kingdom. According to the portal, Yiwei Lithium Energy could be one of these partners. In addition to the 4680 batteries in question, the company is also working on batteries in the 4695 format, Ji Yajuan, director of the research bureau for basic materials and technology, told 36 Krypton. Negotiations are also to be conducted with Ningde Times, LG, and BAK Battery. According to a source on the online portal, LG has developed both 4680, 4690, and other cylindrical batteries in order to secure its place in Tesla's supply chain and to be able to react to any product range changes.

Shortly after the rumors about the cooperation between Tesla and battery manufacturers made the rounds, the Yiwei group denied the speculation about possible cooperation with the electric car maker. As the company said according to "Asia Tech Press", the media reports have caused concern among investors in the battery manufacturer, which is why they felt compelled to make an official statement. "At the time of the publication of the announcement, the company had no cooperation negotiations with Tesla for 4680 large-format cylindrical cells, and the content of the above report is unfounded," said the tech portal Yiwei. As "Teslamag" also reports, what is striking about the statement by the Chinese company is that it is a very specific denial.

It remains to be seen whether there will actually be cooperation with the companies mentioned.

Dean McMannis commented under Torque News Youtube channel and wrote, "probably the biggest reason why Tesla created the Roadrunner project (which lead to the 4680 battery) was specifically to counter the dominance of Asian battery materials suppliers and manufacturers which could have had a restrictive hold over Tesla, who relies on a steady and affordable supply of batteries for their BEVs. This doesn't mean that Tesla won't be reaching out to all of the major battery makers and form alliances. They will always have a great demand for batteries. It just means that by designing and building their own batteries as well (either with partnerships or by themselves) so that they will not face supply shortages or pay unfair prices that any monopoly can force on manufacturers. The current chip and parts supply shortages show that this was a smart move by Tesla years ago. I do not think that Tesla will be sharing their 4680 battery technology with Chinese battery makers, especially the dry electrode tech from Maxwell, but more likely some Tesla battery partners will produce 4680-format batteries, but using the partner company's battery chemistry, whether it's NCA, LFP, or ? So I agree that battery partnerships are critical to Tesla's future success, but I think that the way that plays out in different countries will be a bit more complex than it seems from press coverage and tweets."

Now you noticed that in this report we talked about not only Tesla's 4680 batteries but also other sizes, such as 4690 and 4695. What can we make of these different sizes?

Frank Goodman Jr, has commented under Torque News Youtube channel offering his view. He says his prediction is that "batteries will be a mess of different types and sizes as the market seeks to find an answer to what new size and chemistry standards are going to win out. Obviously, for vehicles larger sizes make sense but the exact size is yet to be decided. This mess will just have to work itself out. And of course, much of the issue is each manufacturer wants to make their barrettes different so it's not easy to change to another size. Once you develop a battery pack it's not easy to chance battery cell sizes. So just as manufacturers of computers and such love to have their own cables battery companies love to have their own batteey sizes."

Chester Chanin commented under Torque News Youtube and wrote "If Musk is anything, he's pragmatic. He needs more batteries globally, due to his many Tesla factories. Yes, expertise is also important. However, I doubt that he's so naive that he doesn't recognize that the Chinese (and perhaps others) will 'steal' his technology. That being the case, he's likely to limit his agreements to 2-5 years with other companies unless they're so good and inexpensive that he can buy them. So, what's likely is that he'll learn what he can from others, gear up his own battery gigafactory and will, as time goes on, likely produce all of his own batteries, after learning what he can from other battery mfg companies."