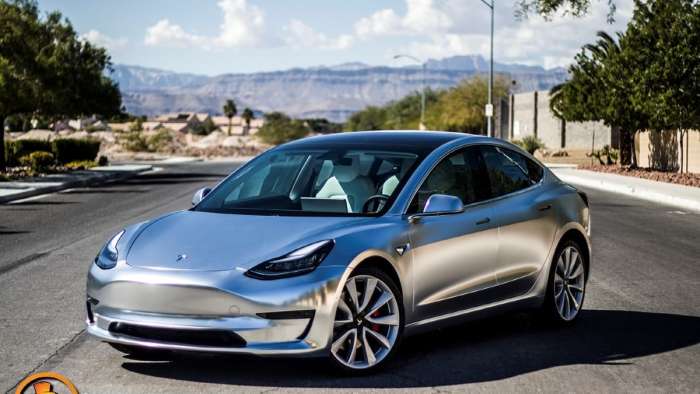 Elon Musk thinks it’s a good idea for Tesla to offer a new exterior paint option. Musk said he will bring up the idea with the Tesla team. This is in addition to the refreshed Giga Berlin Model Y which will have "stunning new colors that change subtly with curvature."
Advertisement

Tesla builds some of the most advanced vehicles in the world. The company’s cars are known for their incredible performance, surprising practicality, and cutting-edge tech features. As a result, the EV maker has been able to garner a large share of the luxury vehicle market.

However, one obvious place the company falls behind against its luxury competitors is the lack of options in its vehicles. Tesla famously only offers 2 interior options (3 in the Model S & X), has 2 or 3 wheel options at a time, and only offers 5 exterior colors to choose from.

These options pale in comparison to luxury vehicle makers such as Porche, Mercedes, and BMW which allow customers to literally configure their vehicles in hundreds of ways.

Tesla’s move to restrict options was however not without a reason. Tesla is a much younger company as compared to its competitors. The EV maker had also been losing money every year since its inception until it finally showed an annual profit for the first time in 2020.

This has meant Tesla needed to keep its operations lean if it was going to have any chance of competing with deep-pocketed legacy automakers, which have had decades to refine their processes.

And one strategy Tesla adopted to ensure efficiency was to restrict vehicle options to the bare minimum. This strategy has allowed Tesla to manage costs and become the first successful US automaker in over half a century.

However, the current Tesla is in a much different position even when compared to the company’s state a few years ago. Tesla has gone from being on the brink of bankruptcy in 2017 to where it is now, which is the most valuable automaker in the world.

Just recently, Tesla posted a record quarterly delivery number. In a note posted on the company’s website, the EV maker said it had delivered 241,000 vehicles in Q3. This is a 65% growth year over year.

Related news: Elon Musk Reiterates Tesla Could Be Bigger Than Apple As Q3 Comes To A Close

Tesla CEO Elon Musk seems to be increasingly aware of his company’s improved standing in the automotive world. And now, having successfully weathered Tesla’s challenges seems to be looking beyond ruthless efficiency and into offering more options to prospective buyers.

Responding to a Twitter post by Earl of FrunkPuppy who wrote saying “we are inundated with white Model 3s and Ys,” and asked Elon if Tesla could “change the free color to something else.” and gave his suggestion to bring back the silver color, Musk agreed saying “good point, will discuss with the team.”

Nevertheless, if Musk’s discussion with his team goes well we might be seeing at least a new standard color if not a brand new paint option. This should be great news for anyone not satisfied with the current 5 paint color options.

However, whichever way the Tesla team ends up going, it won’t be long till we see Tesla vehicles in exotic colors. According to Elon Musk, the “Giga Berlin Model Y will have stunning new colors that change subtly with curvature and will be produced at the world’s most advanced paint shop.

We will be sure to keep you posted as Tesla introduces new paint options. Make sure to visit our site torquenews.com/Tesla regularly for the latest updates.

So what do you think? Is it about time Tesla starts offering new exterior color choices? Also, what’s the one color you are looking forward to? Let me know your thoughts down in the comments below.

DeanMcManis wrote on October 5, 2021 - 1:05am Permalink
I prefer the pearl white to silver (even though I now own two silver cars), but it's true that you cannot shake a stick without seeing a white Tesla nearby. I think that Tesla should offer 2-3 different free/base colors to avoid this one-color issue in the future.