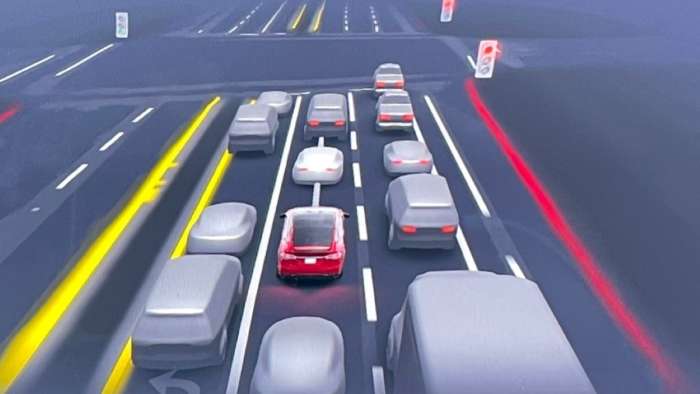 Tesla has currently released the company's latest vector-space birds-eye view visualization to FSD Beta testers. However, Elon Musk now says the mind of the car visualization will be released to all Tesla vehicles, including ones in Europe, next month.
Advertisement

Tesla is currently testing its Full Self Driving Beta software in the wild utilizing the 2000 or so Tesla owners in the EV maker’s Early Access Program. In these vehicles, Tesla has implemented a new autopilot visualization where the vehicle’s view of the surrounding is converted to a dot map in vector space and gets rendered in 3D with spectacular visuals.

This view, on top of being beautiful to look at, is also functional as it gives drivers more confidence by making it intuitive to assess the vehicle’s comprehension of the surrounding. For example, lane markings and drivable area borders render with varying degrees of clarity depending on the vehicle’s confidence.

This is an elegant implementation showing the mind’s eye of the neural net by Tesla’s simulation team members which Musk has praised in the past saying they are crushing it by creating eerily realistic simulations.

However, as I said earlier, these visuals are currently only available for Tesla owners who have purchased FSD and have also been selected by Tesla to be part of the Early Access Program.

Elon Musk in early July had said, the vector space bird’s eye view (mind of car view), will be released with the next FSD beta update.

However, two significant FSD Beta updates have come and gone and still, no Tesla vehicles, except ones in the Early Acess Program, have the new mind of the car visualization.

Nevertheless, the wait finally seems to be over. Elon Musk, responding to a Twitter user who inquired whether FSD visualization will be coming to non-FSD beta tester in Europe, Musk responded saying “good point, we could enable visualization before control. Will enable that option hopefully next month.”

Good point, we could enable visualization before control. Will enable that option hopefully next month.

This is the first time Musk has put a timeline on when we should expect the mind of the car visualization to be released, however, given “Elon Time” we should probably expect the wide release in November or December.

However, no matter when the visualization is released, allowing Tesla owners, even those who have not purchased the FSD upgrade, access to the mind of the car view will have 3 advantages.

First, it will improve the visuals in the vehicles and showcase how advanced Tesla cars are compared to the competition. Two, owners being able to see the mind of the car view will make them more likely to purchase FSD increasing Tesla’s bottom line.

And finally, Tesla is facing difficulties convincing European regulators to allow it to deploy more advanced versions of its autopilot software on European roads. And showing the mind of the car visualization before FSD is deployed might play a part in easing the regulators’ concerns.

For now, we still don’t know if Tesla plans to release the new visualization at the same time in the US and Europe but, we will be sure to keep you posted as the EV maker releases more information. Make sure to visit our site torquenews.com/Tesla regularly for the latest update.

So what do you think? Will mind of the car visualization make it more likely for you to upgrade to FSD? Also, do you think the feature will be released next month? Let me know your thoughts down in the comments below.