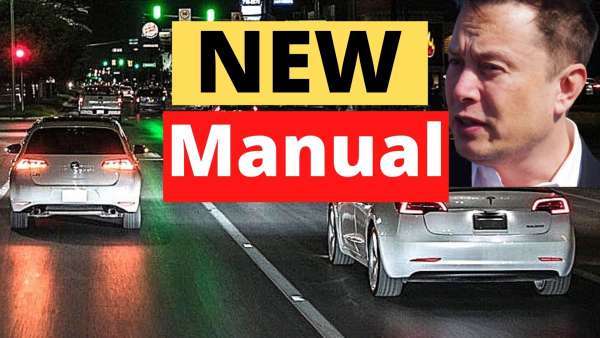 Just hours ago, a Twitter user noticed that Tesla's new Owners Manual has an update, according to which, Tesla Model 3 and Model Y will now detect and slow down for emergency vehicles.

Simon Alvarez from Teslarati found on Twitter that Tesla’s software update 2021.24.12 seems to include something noteworthy for the Model 3 and Model Y.

As per observations of Tesla owner @Analytic_ETH, who was able to view the 2021.24.12 Owners Manual for the Model 3 and Model Y, a particularly interesting section on how Autosteer responds to emergency vehicles has been added by the company. Unlike its previous iterations, the 2021.24.12 Owner’s Manual for the Model 3 and Model Y now states that Autosteer would automatically reduce a vehicle’s sped when an emergency vehicle is detected.

"If Model3/ModelY detects lights from an emergency vehicle when using Autosteer at night on a high speed road, the driving speed is automatically reduced and the touchscreen displays a message informing you... (1/3)

“If Model3/ModelY detects lights from an emergency vehicle when using Autosteer at night on a high speed road, the driving speed is automatically reduced and the touchscreen displays a message informing you of the slowdown. You will also hear a chime and see a reminder to keep your hands on the steering wheel. When the light detections pass by or cease to appear, Autopilot resumes your cruising speed. Alternatively, you may tap the accelerator to resume your cruising speed,” Tesla noted.

But Tesla still emphasizes safety and writes "Never depend on Autopilot features to determine the presence of emergency vehicles. Model3/ModelY may not detect lights from emergency vehicles in all situations. Keep your eyes on your driving path and always be prepared to take immediate action,” Tesla wrote.

I think in the next 12 months we will see a dramatic improvement in the capabilities of Tesla autopilot. Tesla Autopilot is moving to a single AI model stack for all types of roads by version 10.1 and Tesla has already removed the radar input that created more noise than actionable info in their AI driver model. Tesla also got a brand new AI training supercomputer installed that uses Nvidia chips that are 4X faster than their previous Nvidia supercomputer and Dojo looks to take over with another 4X jump in speed by next year.

It is an exciting time to be a Tesla owner especially if you have FSD. Tesla is already saving lives with Autopilot and many more lives will be saved when Autopilot gets more capable.

Tim Kulogo comments under Teslarati saying, ‘Every 12 months we have seen a dramatic improvement of the capabilities of Tesla autopilot. I think the thing that caught us off guard is how much it can improve each year and still not be driving itself. Self-driving cars aren't just an impossible task, but a chain of impossible tasks that we can't even see the end of. We'd never get anywhere without a company like Tesla doing 6 impossible things before breakfast each morning."

Well, regarding emergency vehicles, there is a proposal, saying, “How about someone makes emergency véhicules with radio beacons to notify of their presence and state of emergency status? Seems pretty simple to me.”

Is there a link to the manual that this story is based around? And a page number in that manual where this information can be viewed?