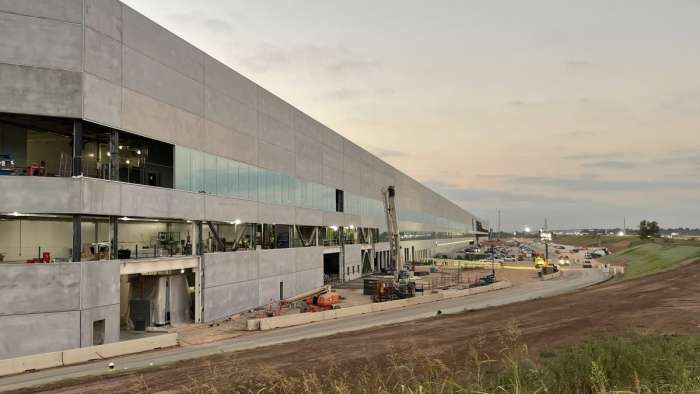 The Latest Giga Texas Pictures and Special Delivery By Truck

Thank you Joe for your coverage on Tesla Giga Austin, TX!

The Latest From Giga Texas

Let's start with an aerial overview of Giga Austin, TX. Joe has a literal birds eye view over Tesla's giga factory in Austin, TX, from his drone, and he shows this in his YouTube videos. From his latest video, here are some of the things mapped out in the giga factory:

There is a total of 987 acres of land which both Tesla and SpaceX are using. There is even speculation that a SpaceX rocket will be used on the eventual Tesla Roadster as an add-on and that it will be able to go 0 to 60 mph in about 1.1 seconds.

Right now, we know that Tesla both produces its own batteries, and also gets its batteries from other suppliers like CATL in China. With the way Tesla does everything in-house, I wonder if that eventually Tesla will produce all the batteries it needs in-house and never get them from suppliers? I don't see this happening until the supply chain shortages ease up.

It's interesting to see Tesla and SpaceX being so closely located. I don't doubt that there is collaboration between the two organizations.

In the battery cell area, there is work going on for the roof and exterior window work helping to flush out the exterior.

There is a paint shop area that has completed roofing and decking with flooring on the inside. There is still more work to be done there, however.

There is a giga casting press area. There is a bridge area getting more roof and steel work done. Inside, concrete has been poured for the giga press foundations. There is also a giga press, #3, which is being assembled.

In the general assembly structure, there is work to install the glass. They use the same suction cups that the CyberTruck was using.

There is a central area, which purpose we don't know, that is having fill dirt put in and around the columns. This area will likely be very important because it is in the center and end of the giga factory.

From what we know about the construction of Giga Austin, TX, the most important pieces for Tesla, in my opinion, are:

The battery cathode factory is another crucial piece of Giga Austin, TX. With this, supply chain shortages will be eased and Tesla will be able to start using these batteries for the Model Y and eventual CyberTruck which will come out of Giga Austin, TX.

The last and most important area for Giga Austin, TX, will be the interior assembly line where the components and frame of each vehicle are assembled and then go through the paint shop. When we start to see the paint shop looking complete and general assembly starting to take place with more than just a few test vehicles, we can expect that Model Y deliveries should happen shortly thereafter.

One thing that we saw recently was what looked like test vehicles for the Model Y being produced on the assembly line in Giga Austin, TX. We speculated that these might be the first Model Y test vehicles.

What are the Special Truck Deliveries?

There are some special things in Joe's Tweet and one of these are trucks with what look like large steel beams and plates. These could be used for the battery cathode plant.

There is also a plate that Joe showed us with this information:

I wonder if this will be used to help build the battery cathode plant. That would be my best guess.

What do you think of the latest images and news out of Tesla Giga Austin, TX? Are we going to see deliveries of vehicles before year end?