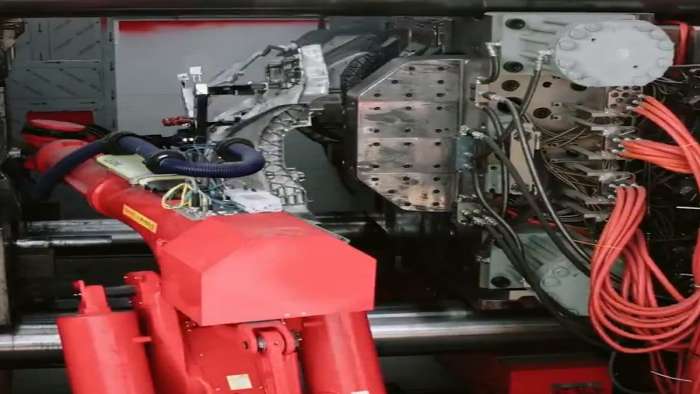 A view of one of Tesla’s die casting machines was shown recently. It’s the biggest of its kind and no other auto-maker that I’m aware of is using this technology. It will speed up production, reduce costs, and give Tesla a competitive advantage. Tesla is making cars the same way toy cars are manufactured with automation and it's like 3D printing! It's like a Giant High Tech Waffler Maker! Let’s see what it’s all about!
Advertisement

What is the die casting machine and what does it do?

Tesla has the world’s largest die casting machines that are a revolutionary change in the auto industry @elonmusk pic.twitter.com/OxD6hZGDYM

The die casting machine forces a molten metal alloy (a metal alloy Tesla created that is special for just Tesla) into a reusable mold. This mold is then opened and the now solidified piece is cooled and cleaned by robots and made ready for use. Quality checks are also performed on the solidified metal.

Each fresh piece from start to finish takes 1-2 minutes and equals about 1,000 castings a day per machine! It's basically making real-life full-sized cars just like a toy car is made! This video from 1965 is the same kind of concept!

Who makes the die casting machine?

The die casting machines are made by the Idra group in Italy. Idra was created in the 1940's and has evolved over time to create the Giga press that Tesla uses today.

This is a very special type of machine, but if Tesla gets enough cash reserves, I can see it buying the Idra group with its cash and exclusively using its Giga press and die casting machines.

How does the die casting machine give Tesla an advantage?

Elon Musk has stated that its die casting machines will save 70 components glued together to form the same singular piece of a car. This is an amazing improvement and will save time, money, while increasing quality!

Essentially, Tesla is going to be able to make large portions of its cars with a single tub of molten (secret ingredient like steel that Tesla only created) that will form into exactly what it needs, saving the need for numerous robots and people to weld and put those pieces together.

What Tesla might do going forward with die casting

Going forward, I can see Tesla doing the following:

This is most of the process:

Could Tesla automate everything including the frame from the die cast machine? Could it start producing vehicle frames one by one in an assembly line that then just need tires put on, seats put in, the outer covering, electrical equipment weaved through it, etc.? I'm looking forward to seeing what Tesla does moving forward!

What do you think about Tesla's die casting machine? Will they eventually get to a point where they make the entire frame in 1 die cast and all they need is wheels, seats, the outer covering, and electrical equipment?

Toyota vs Tesla: Which Stock To Buy These Days
For Some Former Daimler Managers Daimler Is Authority, While Tesla Is Like a Startup
END_OF_DOCUMENT_TOKEN_TO_BE_REPLACED