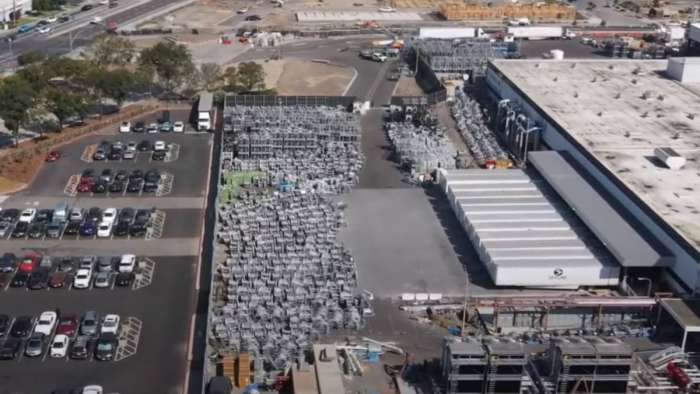 What Are These Tesla Giga Castings Doing Outside at Fremont?

We have a view of possibly 1,000 Tesla giga castings at its Fremont, CA factory. What are they being used for?
Advertisement

We have news from a flyover of Fremont, CA, at the Tesla Giga factory, and we see possibly close to 1,000 Giga Castings outside in the parking lot.

We think that this could be an expansion of the Model Y at the Fremont, CA, factory. Some think that it is for some problem or delay. Let's take what we know.

We know that Tesla is expanding Fremont for its Model Y according to multiple reports. This is from paperwork filed with the City of Fremont.

These castings could be made so that they are ready when the chips are ready to make the vehicles. I would be surprised if all of this is scrap metal that Tesla is going to recycle. There have been no reports of that.

We know that Tesla is a very adaptable company. With the additional expansion at Fremont, Tesla will be able to get rid of the tents and have an actual indoor production assembly with all necessary equipment.

There has been news of Tesla producing cars without chips and getting vehicles ready as much as they can even if the parts aren't there.

That's a very adaptable and innovative approach. It would be very difficult to manage this and I have no doubt that those who are watching the assembly lines at Tesla are having to take great care to organize which cars need parts, what the castings will be used for, in order to keep up with the huge demand for Tesla vehicles.

John W. wrote on September 10, 2021 - 11:41pm Permalink
If Tesla is keeping secrets, then I would guess they are casting rejects.
tangible wrote on September 11, 2021 - 7:42pm Permalink
The castings are both Front and Rear units. Note that Fremont has been making about 4-500 MY vehicles per day. So those stacks represent a couple days' worth. They are NOT SCRAP. Tesla scraps bad castings by cutting them up. They are aluminum and don't corrode in CA weather. Tesla is NOT EXPANDING MY PRODUCTION AT FREMONT. They are simply making permanent the Sprung structures already on site. Why would they expand MY at Fremont when Austin is coming on line imminently? Fremont will changeover to the NEW MY BUILD using F+R castings when 4680 batteries become available, then move on to other lines. All MY will eventually be made ion Austin.