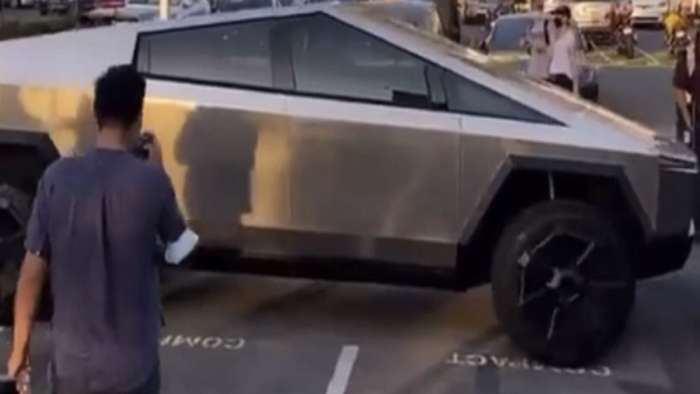 We have footage of a new prototype of the Tesla CyberTruck. It has no door handles and some updated trim, as well as some other minor updates. Let's take a look and see!
Advertisement

We have breaking news of a Tesla CyberTruck prototype from Twitter user. It was spotted in what may be the hills behind the Tesla Fremont, CA factory. Here's what people had to say about it (Note, I put my responses to things said in parenthesis):

What People Have to Say About the CyberTruck Prototype From CyberTruckOwnersClub

The last video proves that CT can play cat-and-mouse. This is a topic for nice discussion. It's hard to tell, but are there handles on the CyberTruck in the second video? Is this an updated version?

That's what I was looking for last night when this was posted. I can't see any shadow or slight indication of handles, but these videos appear to have taken on a potato-phone or are purposefully made to be inadequate for zooming in.

Why do people make 4 second clips?

(I would answer that by saying that the person taking the video had no real incentive to take a long video).

Dear people of the internet: Did you know it's possible to hold your phone sideways while recording video?

(I would agree with this. If you want to take a video of a CyberTruck, please do it horizontally).

I agree there is artifacting around the areas where handles would be visible. I think this is the same prototype until happily proven wrong. Still awesome to see it in action again.

In this case, it was likely an iPhone camera which records a few seconds of video on either side of the still. It's likely the photographer just snapped a few quick shots.

Looks like the hills behind Fremont. Probably preparing for a trip to the stockholders meeting in Austin. Yes, it does look like the same ONE we've seen before. What I look forward to is a video with multiple CyberTrucks in it!

Got me thinking about early CT reservation holders. When I see your CyberTruck in the wild while waiting on mine, I will approach, expect a ride and minimum 1,000 questions are to be answered. Early CT recipients will be hunted mercilessly.

(I expect early CyberTruck owners will want to show other people their truck in addition to being hunted mercilessly for questions and to show it off).

The Tesla CyberTruck is Tesla's market entrance into the market segment of pickup truck. It is intended to be a futuristic and high-end pickup truck and will compete with the Ford F-150, and Rivian's trucks, along with every other pickup truck in the market.

I expect that the Tesla CyberTruck will do very well upon release. The biggest challenge for Tesla will be ramping production and making sure the CyberTruck is of high quality, since Tesla has never mass produced it before. Whenever you are first creating something, there's going to be more bugs and problems to work out than with something you have already done before. As Elon Musk has said: prototypes are easy, production is hard.

I expect the CyberTruck to launch in late 2022. Did you know that someone made a spreadsheet that lets you see an estimated date of when you might get your CyberTruck order?

What do you think of the Tesla CyberTruck prototype? Are we on track to have a full release by the end of 2022? will the truck have door handles or not?