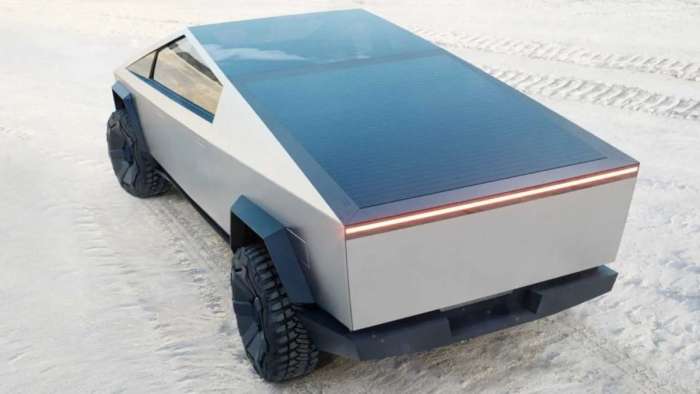 Tesla CyberTruck Will Have Option for Solar Panels

The Tesla CyberTruck will have an option for solar panels, an "ecat" system. This will allow for the truck to charge itself in the sun and possibly be able to keep the vehicle charged for users who don't drive long distances for free.
Advertisement

Tesla's CyberTruck will have an add-on option for solar panels, an "ecat" system that will allow the truck to be charged from the sun while driving or parked. This has profound implications for those in sunny areas and may mean rarely having to charge for those who don't drive long distances.

Solar Panels for the CyberTruck

For someone like me who will use the CyberTruck as my daily commute vehicle, having the solar panels would be a really nice add on. Most days, I would be driving my CyberTruck and parking it at work, and then driving home at the end of the day. Whatever sun the truck got would contribute to its charging. I may never have to pay for charging.

Will Other Tesla's Charge Themselves?

Will Tesla offer add-ons for other Tesla vehicles to have solar panels and be able to charge while in the sun? I think it would be difficult to retrofit old cars to do this, but new models certainly could. I'm sure there are some talented engineers at Tesla who could figure out how to get the solar panels to work.

Tesla could also make it easy to hook up a solar panel array that folds up and can be put on top of the Tesla car when it is parked. I think there are people who would use that.

What do you think of the CyberTruck being able to charge itself with solar panels? Would this be something you would buy as an add-on to the CyberTruck?

Michael Marshall wrote on February 12, 2022 - 2:38pm Permalink
I made my Cybertruck reservation yesterday. The solar panel option is something I am very interested in.