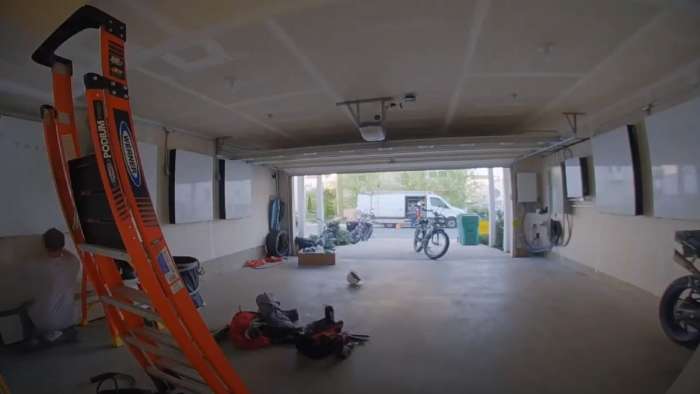 This Tesla PowerWall User Can Live Off Grid and Get Paid for Energy Credits!

We have breaking news from Twitter User Leon Spears (@leonspears) who purchased 7 Tesla PowerWalls 2+ and 16 Solar Panels for the roof of his condo in the Baltimore, MD area. Leon shares his experience and the numerous advantages there are to having a Tesla PowerWall 2+. Let’s go over it!
Advertisement

Leon had 7 Tesla PowerWalls 2+ installed in his garage and he did this for multiple reasons. The first was for saving money with tax incentives. The second is to have peace of mind and to not be reliant on the grid for energy in case the grid goes down. The third is to get paid for energy credits (excess energy that Leon did not use and is sent back to the grid). The fourth is to take advantage of potential microgrid opportunities (the energy company will pay you for whatever goes in excess of your batteries).

What’s really cool is John Andrews, Tesla’s master electrician, and Jason Stewart (the lead for solar panels) for energy came and oversaw the installation himself.

You can get up to 10 PowerWalls 2+ for a home if you pass an impedance test, which Leon’s home did. He got 7 PowerWalls 2+ because that was what he needed for his specific needs. Leon uses quite a bit of energy by charging a Tesla Model X, powering his home, and he has two CyberTruck’s on order!

What Leon has installed is a PowerWall 2+. If your battery was built after October 26, 2020, this is what you get. You get an inverter/gateway combination installed with the battery. The only exception to this is if you have a large (12 kilowatts) or x-large (16 kilowatts) install. Then you get the gateway and inverter installed as separate products.

Leon could have opted not to have batteries installed and instead powered his home with the solar, but that would have meant the solar power would have gone directly into the grid and he would not have been able to store it in batteries. He would still have saved money over time, but not had peace of mind by having backup battery power.

What did it cost and are there tax credits?

The total cost of the solar panels and 7 Tesla PowerWalls 2+ was $61,000. He will get a 26% Federal tax credit and a $5,000 state of Maryland tax credit, putting the total cost at around $40,000. Tax credits are an important thing for renewable energy right now.

He ran a 20 year calculation and with his monthly cost of energy usage at about $270, which he now is going to pay to Tesla each month as a 20 year loan for the setup, he will get the added benefits of solar energy storage with the batteries as backup.

This is a very smart way to do it. He’s paying the money he would normally pay to his energy company, to Tesla each month. And when that loan ends, he’s paying nothing for energy!

The numerous benefits of having Tesla PowerWall 2+

The biggest benefit I can see is the ability to live off the grid. You are no longer bound by another company, disasters, or other events that cause power outages. This is especially useful if you have important things that need to be refrigerated or life-saving devices that provide oxygen.

The next benefit is the amazing cost savings. With the same monthly payment now going to Tesla instead of the energy company, you get the added benefit of solar panels and 7 PowerWalls 2+! After the 20 year loan ends, Leon will then have this setup and be paying nothing for it! That’s incredible.

The third benefit is Leon will be functioning as his own “mini energy company”. He will be able to send power back to the grid, which will be paid in cash to him at the end of each April. Next year in April, we should check in with Leon to see how much this is, but he said it could be around 200% of his normal usage spent on energy - there is a cap. That’s absolutely incredible. Leon’s batteries will fill up and when they fill up, excess will go to the grid. When the sun goes down, the batteries will be used until the sun comes out again to fill up the batteries.

Finally, it was fun to hear the story of a power outage in Leon’s neighborhood. Using a feature called "Storm Watch", you can set your power to start filling batteries from the grid in case of a bad weather event coming or anything that might affect the grid. The day before, Leon’s neighbor was poking fun at him for having such a large PowerWall 2+ setup. With the power the next day going out for his neighbor’s house and 20% of his neighborhood, Leon turned on all 72 lights in his house as a friendly gesture that his power was working and his neighbors was not :)

I want to thank Leon for sharing all this incredible information about Tesla energy and the PowerWall 2+ system with me. Tesla energy has a bright future and I’m looking forward to hearing more about Leon’s setup and what other people’s experiences are with it.