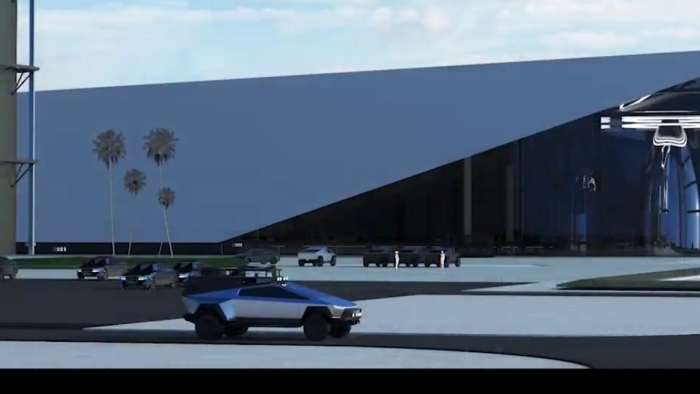 Elon Musk has shared a new Cybertruck render with 6 wheels, a much wider rear body, a new rack to supplement the vault, and several other lithing features.
Advertisement

Tesla unveiled the Cybertruck back in November 2019. Since then the vehicle has amassed over 1 million reservations with some estimates pushing the reservation number as high as 3 million.

Demand for Tesla’s futuristic truck is through the roof. However, Tesla has delayed Cybertruck production to 2023. Supplier leaks have even pushed out the start of production to the end of 2023 with first deliveries not coming until early 2024.

Elon Musk has also recently revealed the Cybertruck is sold out until 2027. This has been disappointing for those of us who can’t wait to see the futuristic truck out on the roads.

However, in the past couple of weeks, there has also been some good news regarding Cybertruck’s production. Musk has confirmed a new 9000-ton Giga Press which will finish assembly next week will be used to build the Cybertruck’s body.

And now as we wait to see whether this means Tesla might start Cybertruck production earlier than expected, we have gotten a new render of a different design of Cybertruck.

However, among those details, we also see a new Cybertruck render. This Cybertruck has some notable changes including 6 wheels with 4 wheels on the back, a much wider rear body, additional lighting on the top, and a new rack design to supplement the vault.

This is a significant departure even from the redesigned Cybertruck we saw earlier this year. The new truck already had changes including rear wheel steering, handless doors, an opening from the bed to the rear seats, and many smaller changes.

Musk has also confirmed there will be a new quad motor Cybertruck variant. Even though Elon hasn’t shared details of the new truck, insider leaks have suggested it will have 0 to 60 mph time of under 2 seconds.

However, this new render shows off a completely new design which helps the truck become even more utilitarian. The wider body and 4 wheels in the rear will improve towing capability and traction.

Related News: Tesla To Have Working Prototype Of Tesla Bot By September 30

The new rack and lighting features will also help to add more functionality to the truck. Not to mention giving an option that improves on the more controversial triangular rear design.

With all the changes we have seen from the Cybertruck’s unveiling back in 2019, Tesla’s first truck is shaping up to be a truly once-in-a-lifetime product. This explains why Musk has said the Cybertruck will be Tesla’s magnum opus.

Even though all of this is incredible to imagine, as of now the only evidence we have for the new 6-wheel Cybertruck is a SpaceX render. However, we will be sure to keep you posted if we get further confirmation. Until then, make sure to visit our site torquenews.com/Tesla regularly for the latest updates.

So what do you think? Excited to see a Cybertruck with 6 wheels and a wider rear body? Also, what is your thought regarding Cybertruck’s new look? Let me know your thoughts in the comments below.

For more information check out: The Only 3 Surviving Car Makers Will Be...

Fred Savagery wrote on June 9, 2022 - 9:46am Permalink
So he put out pics or drawings of a truck that doesn't exist and we've never seen any version on the streets of the towns we live in. Wow, sign me up for a blue one.
Bryce wrote on June 11, 2022 - 9:25am Permalink
First, it's called a dually. Our a DRW (dual rear wheels) I have a Silverado 1 ton dually that I was hoping to replace one day with a cyber truck since my farm has solar panels. I actually wrote tesla an angry letter when they changed the concept to the much smaller version of the tesla truck we see out there today. Working men need a real truck not the soccer dad truck that tesla is planning to make
Tinsae Aregay wrote on June 13, 2022 - 9:56am Permalink
I think Tesla has backtracked on those plans. After considering shrinking the Cybertruck, in the end, they decided to keep the size practically the same. Still, I totally agree with your point, the Cybertruck should definitely be less of a "show truck" and more of a utilitarian machine.
Matthew Forys wrote on June 13, 2022 - 11:05am Permalink
I'd venture to say both design options are needed. Even the rural "soccer dads" tow trailers, haul things, not to the extent that farm workers do, but that's why (using Chevy as an example) there are more 1500 grade trucks on the road than 2500 or 3500 or 4500. Mayne 1 dually per every 10-15 non- dually?. I think Tesla needs an SUV option. It's really the entire family that needs an electric option that can tow a trailer / camper & still go 500+ miles on a single char b e. #bringbackfamilyvacations ...at least that's where the money is at.
RAM wrote on June 12, 2022 - 1:10pm Permalink
*'through the roof'
Tinsae Aregay wrote on June 13, 2022 - 9:49am Permalink
Thanks, corrected

Tesla Contemplates A New Strategy for China Retail even As Sales Boom
Jay Leno on Elon Musk & EVs: “I Think He Should Get ... Credit"
END_OF_DOCUMENT_TOKEN_TO_BE_REPLACED