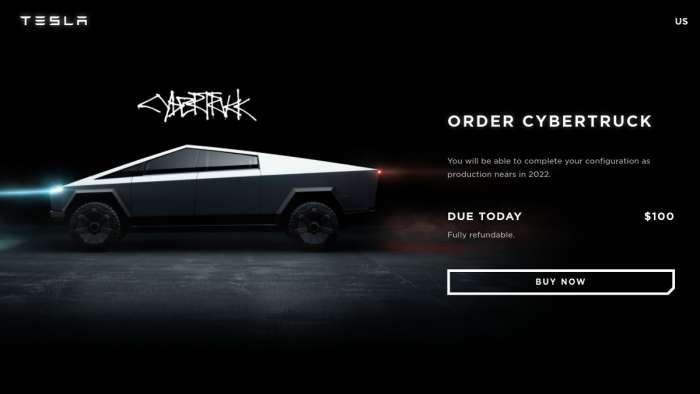 Elon Musk To Announce A Quad-Motor Tesla Cybertruck That Can Do 0-60mph In 1.99 sec Next Month

According to rumors circulating around Tesla Twitter, the EV maker's new quad-motor Cybertruck will have 0 to 60 time less than 1.99 seconds. We expect Elon Musk to announce the vehicle At Tesla's upcoming Q4 earnings call in January.
Advertisement

When Tesla announced the Cybertruck back in 2019, the vehicle had specs unheard of in the truck world. The tri-motor Plaid Cybtruck was announced with the ability to sit 6 adults, a full-sized bed, tow 14,000lbs, and be able to do 0 to 60 in 2.9 seconds, which is better than most sports cars.

However, after the Cybertruck’s volume production got delayed to 2023, the Rivian R1T & the Hummer EV have come out with somewhat similar specs.

The Cybertruck still seems to be the most overall rounded of the competing all eclectic trucks however, Musk has said the Cybertruck will be a once-in-a-lifetime product and for the vehicle to live up to those lofty goals, Tesla will need to update the truck’s specifications.

Related news: Tesla CEO Elon Musk Jokes About Quitting His Job, And The Media Bought It

Already, there are signs Tesla is changing the Cybertruck’s specs. First, the EV maker removed all versions of the Cybertruck from the company’s online configurator. And later on, Elon confirmed rumors the Cybertruck will have a new 4 motor version that can do a tank turn.

The same sources which first leaked there is a new quad motor Cybertruck in the works also revealed Tesla has canceled the rear-wheel-drive and cheapest version of the truck. However, Musk has stopped short of confirming those leaks.

And now, before we can wrap our heads around all the changes coming to the Cybertruck, there is an even more exciting rumor circulating around Tesla Twitter concerning the all-electric truck.

According to @RealWheelieman, who is a Tesla owner, investor, and FSD Beta tester, the new quad-motor Cybertruck will be able to accelerate 0 to 60mph quicker than the Plaid Model S. This means a 0 to 60 time less than 1.99 second.

It’s almost unimaginable to think Tesla will be able to build a full-sized truck that can accelerate quicker than the Model S Plaid. Also making this assertion harder to swallow, @RealWheelieman does not have a long track record of leaking Tesla insider information.

Still, if Elon says the Cybertruck will be a product that comes once in a lifetime, this is the type of insane spec we can expect.

Still, no matter how crazy we expect the Cybertruck’s new powertrain to be, the vehicle is nonetheless constrained by the laws of physics. As a result, @RealWheellieman says even though the Cybertruck will be able to beat Model S Plaid from 0 to 60, the all-electric truck will not be able to match the laters 200mph top speed.

Faster than 1.99s at almost twice the weight? No way.

As for when Tesla will announce the updated specs for the Cybertruck, @RealWheelieman did not give a date. However, Elon Musk recently speaking at the CEO conference hosted by WSJ has said he will give a Cybertruck update at the Q4 2021 earnings call.

Tesla usually hosts Q4 earnings calls in the last week of January, so we should know more about the quad-motor Cybertruck’s specs then. We will be sure to keep you updated as more information gets revealed. Make sure to visit our site torquenews.com/Tesla regularly for the latest news.

So what do you think? Can Tesla build a full-sized truck that can accelerate quicker than the Model S Plaid? Also what other expectations do you have for the updated Cybertruck? Let me know your thoughts down in the comments below.

https://www.tesla.com/cybertruck/design#paymentTinsae Aregay has been following Tesla and The evolution of the EV space on a daily basis for several years. He covers everything about Tesla from the cars to Elon Musk, the energy business, and autonomy. Follow Tinsae on Twitter at @TinsaeAregay for daily Tesla news.