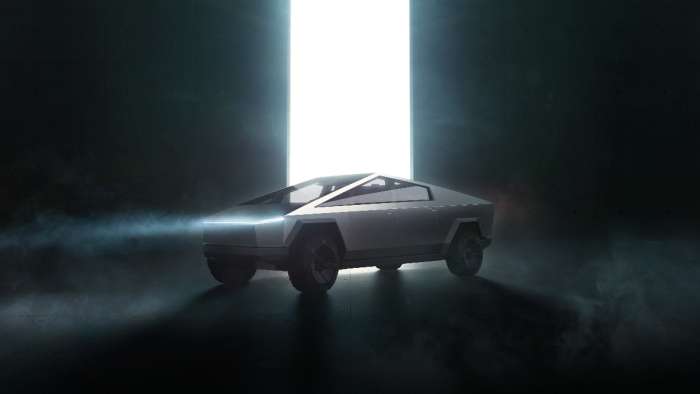 Tesla announced the Cybertruck back in 2019. At the unveiling event CEO Elon Musk said production will begin in late 2021. However, by the middle of 2021, Tesla updated the company’s online configurator stating Cybertruck deliveries will not begin until 2022.

At the time most Tesla analysts expected Cybertruck production to begin in early 2022. However, at Tesla’s AI Day presentation, held on August 2021, Musk made comments which suggest the futuristic truck won’t come until the same time next year.

Related news: Stunning Video of Inside of Giga Berlin Production

Musk’s comments at the time confirmed that the Cybertruck has been delayed to the second half of 2022. However, that wasn’t the end of the delays. At Tesla’s Q4 2021 earnings call, held early this year, Musk said Tesla plans to begin Cybertruck production “hopefully come next year”

Most Tesla watchers interpreted Musk’s words to mean start of production in early 2023. However, during the Model Y delivery event at Giga Berlin, Musk stated “We [Tesla engineers] want to complete the development of Cybertruck this year and be ready for production next year.”

It’s not exactly clear what Musk meant by “be ready for production next year”, however, I interpret it as Tesla isn’t planning Cybertruck preproduction and systems integration until next year.

If we were to extrapolate from Tesla’s Model Y launch at Giga Berlin, It took the EV maker around 4 months to go from the start of Model Y preproduction to customer deliveries which only began a couple of days back.

And the Model Y is a vehicle Tesla has already ramped to volume production at 2 factories on 2 continents. This means, Tesla already had a blueprint of what to expect as it was ramping Model Y production at Giga Berlin.

Cybertruck on the other hand is a brand new vehicle. On top of that, according to Elon Musk, the post-apocalyptic truck will require several novel manufacturing techniques which aren’t only a first for Tesla but for the automotive industry at large.

Adding all this together, I don’t think it’s a stretch to imagine Cybertruck’s preproduction phase taking 2 to 3 times longer than that of the Giga Berlin Model Y. And if this comes to be true, it’s unlikely we will see the Cybertruck until late 2023.

This will indeed be disappointing for the more than a million Cybertruck reservation holders. However, as of now, this is still speculation, we will be sure to keep you updated as Tesla begins the Cybertruck production process in earnest. Make sure to visit our site torquenews.com/Tesla regularly for the latest updates.

So what do you think? Do you agree with my assessment of Elon Musk’s Cybertruck comments? When do you expect the futuristic truck to begin deliveries? Let me know your thoughts in the comments below.

For more information check out: Kia EV6 and Hyundai Ioniq 5 both Outsold Ford Mustang Mach-E in February Also, see Lucid Motors May Have To Raise Prices On Future Models

Tesla Contemplates A New Strategy for China Retail even As Sales Boom
Jay Leno on Elon Musk & EVs: “I Think He Should Get ... Credit"
END_OF_DOCUMENT_TOKEN_TO_BE_REPLACED