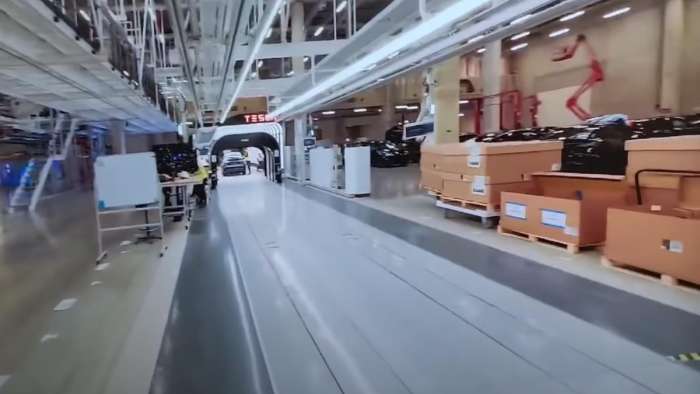 Stunning Video of Inside of Giga Berlin Production

Stunning Video of Inside of Giga Berlin Production

There's some new video of a stunning video inside Giga Berlin's production. A flying drone with a camera is showing flying through Giga Berlin and here's what is shows:

The drone takes off from the inside of a Model Y and then goes down the production line where a few people surround a black Model Y. The drone then flies to many more Model Y vehicles, also in an assembly line, and within a Tesla made cover - the presentation setting for the delivery of the Model Y vehicles today.

This is a big day for Tesla Giga Berlin and this video shows a long process to get Giga Berlin approved. Elon Musk would have liked it to be faster and to happen last summer. However, for Germany, this is a record. For a factory to come online in a few years is quite a feat - most projects take much longer.

Nobody would have bet on Berlin being the winner for Tesla's factory for Europe. Tesla has already sold 30 Model Y EVs, all delivered today. From what I've heard, only black and white paint are available for the performance Model Y's, but more colors will be available in the future.

Why did Brandenburg win out in the approval and factory site for Tesla? Politicians promised faster approval and low taxes for the Germany factory site. They showed Tesla employees the property area from an aerial view and this left an impression on Tesla.

There is also a lot of access with rail and motor way, along with the Berlin airport, and all of this is 20 minutes or less away.

Elon Musk announced on November 12, 2019, that Brandenburg, near Berlin, Germany, would be the site for Tesla's Europe factory and a few weeks later, Tesla bought the large amount of land from the state of Brandenburg for a bargain price of 40 million Euros.

There was resistance that formed from residents with leaflets with plants, animals, and water being shown in danger. Still, Tesla wasted no time and submitted plans for their factory, which is now complete, about 2 1/2 years late and now taking deliveries.

Tesla can start building and selling cars, and thankfully, the factory was approved without Tesla having to disband and demolish their factory.

There have been many critics against the Giga Berlin settlement. Tesla removed forest area in order to have the space to build their factory. Environmental groups sued and put up resistance to this. In the end, I'm glad Tesla was able to build their factory and have it be approved. Tesla vehicles will do more for the environment than any other company. You can listen to more of the challenges Tesla had in getting Giga Berlin approved in the below video:

Will Giga Berlin be able to ramp production within a year? Will Tesla be able to expand upon this factory? How soon will we get more paint colors?