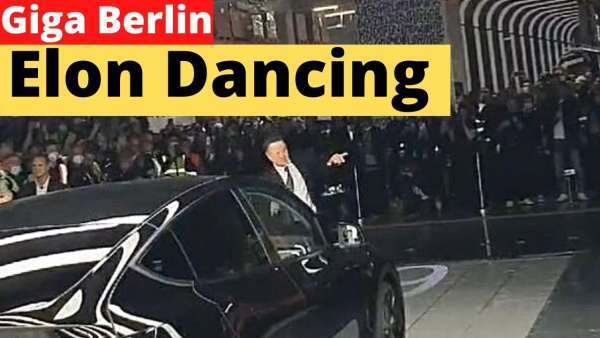 Hours ago Tesla CEO Elon Musk again performed his signature dancing at the opening ceremony of Tesla Giga Berlin before his speech, which has kind of become his trademark.

Here you can hear Elon Musk's speech at the Tesla Giga Berlin's Model Y handover and the opening ceremony.

“This is a great day for the factory,” Musk said, before hailing the launch as “another step in the direction of a sustainable future,” according to Reuters. The Tesla CEO revived memories of the launch of the firm’s Shanghai factory in January 2020 where he also showed off some of his dance moves.

A good two years after the first application and less than two years after the groundbreaking ceremony with an excavator on the site in Grünheide near Berlin, Tesla started deliveries from its German gigafactory on Tuesday. CEO Elon Musk was present in person and began handing over the 30 officially first Model Y Performances to the invited customers around 1 p.m. Chancellor Olaf Scholz gave a short speech beforehand, in which he described the Tesla decision for the German location as a good sign.

Shortly after submitting the first applications with many thousands of pages for the German factory, Tesla began construction work on the basis of advance approvals from the Brandenburg authorities. The final approval according to the Federal Immission Control Act did not come until the beginning of March, which was then followed by approvals. There was no official announcement about this, but with the handover of the first electric cars from the Gigafactory it is clear that the commissioning has also taken place. So the German Tesla factory is now officially operational.

During his previous visit to the German Gigafactory for a festival for fans and the local population last October, CEO Musk announced the start of the first deliveries for the same year. Ultimately, it was about three months longer and a total of about nine months compared to the original Tesla plans. The complicated German approval process contributed to this, but also the fact that the Gigafactory was rescheduled again in June 2021 , so that it basically started from scratch.

According to Tesla, the German factory is currently designed to produce 500,000 Model Y per year. In October 2021, CEO Musk said it would likely take until the end of 2022 to reach about half capacity. By then, locally produced battery cells in the company's own 4680 format should also be available, making the battery pack part of the Model Y's supporting structure. In the meantime, the vehicles from the German factory will be equipped with batteries that Musk says will be supplied by Tesla in China .

Tesla Contemplates A New Strategy for China Retail even As Sales Boom
Jay Leno on Elon Musk & EVs: “I Think He Should Get ... Credit"
END_OF_DOCUMENT_TOKEN_TO_BE_REPLACED