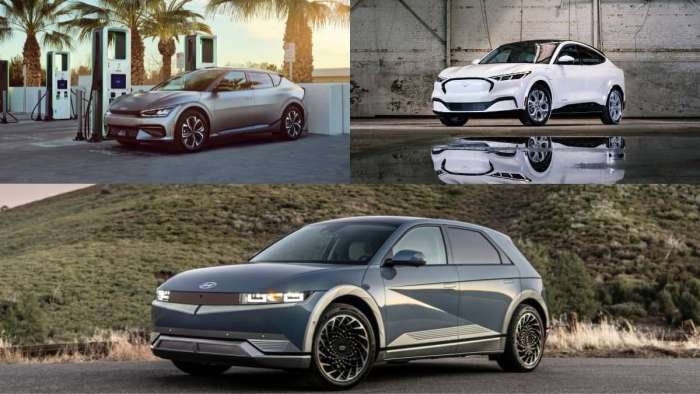 In the short time that Kia’s EV6 has been on sale in the U.S. (since early February), it is already outselling the best selling non-Tesla EV from 2021, the Ford Mustang Mach-E. To be clear, that is for only a single month of sales, so far. But Kia’s EV6 isn’t the only Korean EV outselling Ford, Hyundai’s Ioniq 5 also outsold the Mustang Mach-E last month. Note, February was only the second month the Ioniq 5 was on sale in the U.S.
Advertisement

Let’s look at specific numbers. According to InsideEVs, last month Hyundai sold 2,555 Ioniq 5s in the U.S., Kia sold 2,125 EV6s, and Ford sold 2,001 Mustang Mach-Es. None of these brands and models drastically outsold the others last month, but it is telling that both Kia and Hyundai are already outselling all but Tesla in the U.S. after only a month or two, and it suggests there may be a back and forth sales “battle” between these 3 compact EV SUVs throughout the year.

In 2021, Ford averaged a little over 2,250 Mach-E sales per month, and February 2021 was their best sales month of the year with around 4,000 sales. Thus we could say Ford’s sales aren’t down too much, comparatively, on average. That isn’t the takeaway we should focus on though. Ford stated that they are targeting 200k Mach-E units per year by 2023. A mild downward trajectory certainly isn’t going to be the path to attaining this goal, however. Ford knows this, all the people who may be waiting on a Mach-E also probably know this. But I am going to go ahead and say this now: Ford isn’t going to achieve that goal by next year. I may be proven wrong, in fact I will be happy to be so. I think it is impossible at this point, given all the supply chain issues every automaker is facing in some capacity, and because 2023 is only 9 months away, that Ford will be able to increase production roughly 10x over current levels. I think they will be lucky to triple it by 2023, if things don’t turn around in the supply chain soon.

Now I am going a little further out on this limb. Either Kia or Hyundai has a good chance of outselling the Mach-E this year with their respective EV6 or the Ioniq 5 models, as their global production figures already support this trend with Kia producing more, per month, than Ford has managed to produce since the middle of 2021 (about the time semiconductor/supply chain shortages really started to bite into production/sales). I am practically certain that Hyundai and Kia combined will outsell the Mach-E. Catastrophe, surging supply to other regions, or just further stymied production could, of course, prevent these scenarios from happening as I predict. But the reason I say this so early in the year is because what we can see in just a couple months of data is Ford having a much harder time increasing their volume than the Korean automakers. That isn’t likely to just stop and dramatically swing the other way. If Ford were to be on track for their 200k per year goal, by now they should be selling at least 3-4x the volume of Mach-E that they have been this year. But they aren’t and they can’t, because they don’t have the chips and or other components.

If the March sales data shows a total reversal of the trend, perhaps I’ll have to eat my words after prematurely calling this race. I don’t mind eating humble pie though. It would mean things are going better in the monumental effort to shift consumers away from dirty, atmosphere wrecking fossil fueled powered vehicles to electric vehicles, a change that can’t happen soon enough, in my book.

John Goreham wrote on March 22, 2022 - 5:18pm Permalink
Great overview, Justin. It is clear that both Kia and Hyundai are serious about these great new models.
Justin Hart wrote on March 22, 2022 - 10:45pm Permalink
Definitely serious! I know you have driven the Ioniq 5, have you also driven the EV6 and the Mach-E? I am thinking I should try to arrange test drives of at least the EV6 and the Mach-E for a comparison.