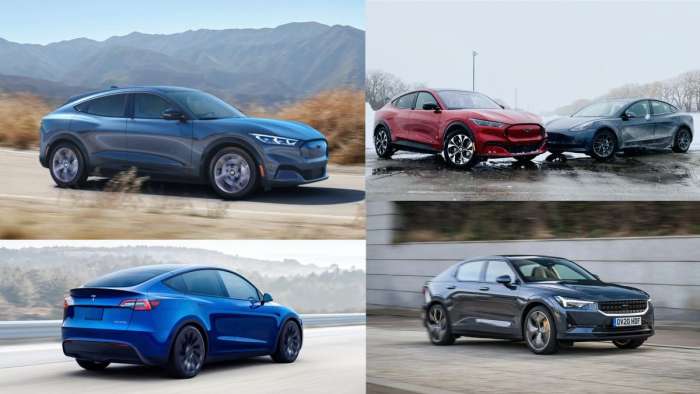 How Does The Mustang Mach E Stack Up Against Other EVs, Like The Hot Hatch Polestar 2?

The Ford Mustang Mach E is no slouch on the track. Even its non GT version puts most SUVs to shame with a blistering 5.1-second 0-60 and its GT Performance Edition tears down the track with an even more impressive 3.5 second sprint from stop to 60 miles per hour. With such speeds, how does it compare to its competition like the Polestar 2, XC40 Recharge, muscle cars, like my Challenger, or even the Jeep Wrangler 4xe?
Advertisement

The Jeep Wrangler 4xe is probably the least of that list to be like the Mustang Mach E. While the Mach E may be marketed as a compact SUV, it is really more of a crossover. As I’ve mentioned before, its ground clearance is only a half inch (1.25cm) higher than my Challenger R/T, so it can clear one extra Lego block before it tears up the underbody or any aftermarket skid plates installed. The Wrangler is my preferred because I feel that it offers more reliability and utility for my purposes; I don’t go off-roading frequently now, but when I have a more capable off-road vehicle, I enjoy hitting the trails here in sunny Florida. A Raptor iteration of the Mach E has been dreamed up by at least one artistic soul in a dramatic render, and it might be more of a competitor for the Wrangler. Of course, the Mustang wins on the track or road in races any day. Both are Domestic brands and both have some reliability issues, with at least one or two folks having difficulty charging their Mach E or having it turn into a brick on them. 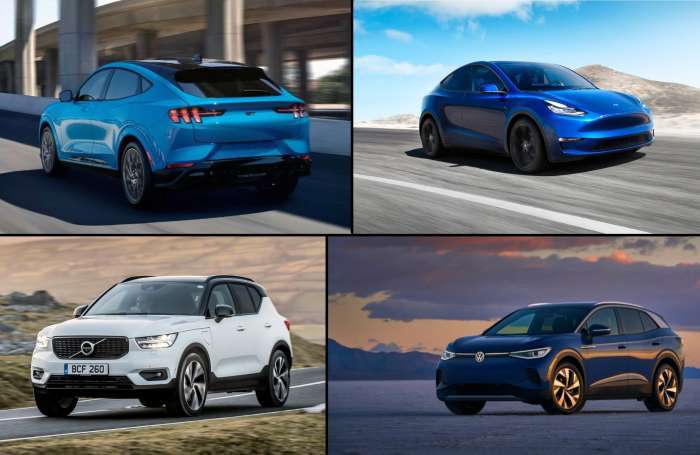 The Mustang Mach E almost directly compares to the Tesla Model Y. They’ve got almost all the same stats, like roughly the same 300-mile range on a full charge, or in top specs, a 3.5 second 0-100 kmph run. The Tesla Model Y has been rated more favorably than the Mach E in a few reviews by folks that have driven both, though my compatriots here at Torque News have chosen to leave it a draw. These vehicles are healthy comparisons and excellent offerings from both Ford and Tesla.

The Polestar 2, on the other hand, is almost a full second slower in the sprint than the Mustang Mach E, and is related to the Volvo XC40 Recharge, which is one of the safest SUVs on the road. I personally love the hatchback look of the Polestar. I think it’s got great lines and it’s got the better interior, in my opinion. The Mustang Mach E’s interior is supposed to be inspired by the Mid-Century Modern aesthetic and it could just be me, but it doesn’t bring me any real excitement or joy. Side by side, they’re quite similar, but the Polestar 2’s interior has a few more curves and a lot fewer buttons. I can say that while I’m interested in driving both; I prefer the aesthetic overall of the Polestar 2, though the performance of the Mustang Mach E might be enough to make me choose it over its Swedish competition.

I don’t feel that Volvo’s XC40 Recharge is much of a competitor in this ring. It’s a little too lethargic when compared to the Mach E, even if it compares to the Volkswagen ID.4 or Toyota RAV4 Prime favorably. The interior of the Volvo is also significantly smaller than that of the Ford, so bigger people might prefer the Mustang for that purpose. I never thought I’d say that a Mustang was a better choice for a roomy interior, but the Mach E seems to pull it off.

How does the Mach E compare to a muscle car, like my 2016 Dodge Challenger R/T? Why would I make the comparison? Well, the Mach E isn’t really an SUV in my book. It’s too low to the ground and really is more of a hatchback that’s been granted a slight case of gigantism. So yes, I think it’s comparable. My R/T is what I love. It’s got that amazing rumble and I love how the manual transmission lets me sling the rump of my steed around in lovely arcs. The single speed transmission of the Mach E is actually still very fun to drive. It’s faster than my Dodge and a heck of a lot more energy efficient, which would probably save me some money in the long run. As the laws change, too, my Challenger may be legislated out of service to save the environment, despite being 50 state legal at time of publishing. The Mustang Mach E should be more mechanically reliable too, because Electric Motors are fairly simple and straight forward and require little maintenance compared to an ICE, but the Mach E has been graced with some first generation reliability issues that are endemic to first run cars.

The Electric Automotive Revolution is in full swing as even Dodge gets ready to electrify. More and more charging stations are popping up. The infrastructure is getting to where it’s just as easy to charge your BEV as it is to fill up for your gas-guzzling grumbler. Some folks will always cling to gas, I think, but driving the Mustang Mach E could make a few of them change their minds.