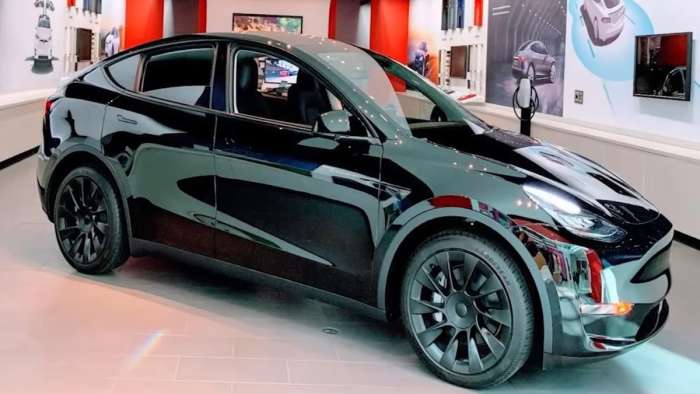 There has been a lot of news lately about the 279 mile range from Giga Texas and its new EPA filing. We think that this vehicle could use LFP batteries as a standard range Model Y - but only if one condition is true. We'll talk about it below.
Advertisement

A New Model Y With 279 Miles of Range

This was how things were supposed to go, but as always, things change based on current events and supply chain challenges. With nickel prices soaring and demand through the roof, Tesla needs to find a way to make vehicles without using Nickel and Cobalt. Tesla needs to make decisions and this first decision is ramping vehicles and making standard range vehicles with instead, LFP batteries. However, they are heavier and it takes a lot of them to make an acceptable range in a bigger and heavier vehicle.

The new 279 range Model Y could be made from Giga Texas and this is a possibility. The largest battery factory in the world will eventually come from Giga Texas, and it would make sense to make the batteries there for Tesla's vehicles. It's a long distance to send LFP batteries from CATL in China, all the way to Giga Texas...

Elon has mentioned how important it is to make batteries at the site of vehicle construction. The Model Y standard in China, using CATL batteries, gets about 230 miles with a 60 kWh battery pack. If Tesla goes to 73 kWh, you get to the around 279 miles of range. However, this adds about 250 lbs., which affects the amount of range you get due to the additional weight, thus you have to compensate, taking the battery more toward 78 kWh. That gets you to around 279 miles of range.

Tesla Range With LFP in Model 3

You could put in extra batteries to get the range, something Lucid has done with the Lucid Air Dream Edition. With 8 kWh of batteries added to the standard range Model Y in the U.S., you could get to 86 kWh and get about 279 miles of range. But now you have a very large battery pack and the car won't handle as well.

Elon Musk calls large battery packs like "a bag of potatoes". He is in favor of fewer batteries, and moving them to the center of the car. If you add in these extra batteries, does it make sense to have reduced handling, more batteries, and extra costs and supply use for this new standard range Model Y?

Isn't BYD supplying Tesla with blade batteries? There has been reports of this, but I'm not quite sure this is happening. From what I can tell, BYD batteries have lower energy density than Tesla batteries... But Tesla does want to get its hand on as many batteries as it can get.

Tesla would need to make an 88 kWh on the Model Y in order to get 279 miles of range. This is a heavy cost, reduces handling and acceleration, and is against what Elon Musk has said. LFP batteries could be shipped from China to Texas, but that is difficult. And the LFP batteries weight more and that weight just doesn't add up for the EPA filing...

If this is indeed true and the new Model Y has LFP batteries, then I will be excited in this new breakthrough in battery technology.

Will the new Model Y from Tesla use LFP batteries? Will this Model Y come from Giga Texas? Will LFP batteries be shipped to Giga Texas from China (CATL)?

tangible wrote on March 21, 2022 - 11:31am Permalink
MY AWD SR will be made in Fremont, not Texas. GigaTexas production line is constructed to build a MY chassis around the structural battery pack, not the 'backup plan' non-structural 2170 pack. Fremont's assembly line, on the other hand, IS constructed around making chassis using 2170 packs. It's entirely possible the MY AWD SR will be using 2170 cells. But Elon wants to make a lower cost vehicle for both market share and profits this year. LFP gets him there quicker.
DeanMcManis wrote on March 26, 2022 - 4:45am Permalink
It shouldn't be surprising with the steep hike in nickel prices that Tesla will use the Chinese LFP battery pack in the upcoming Model Y SR. Elon Musk said that all SR models would use LFP batteries. He didn't build the previously announced Model Y SR/RWD, but he can just have Giga Shanghai ship of the Model Y LFP battery packs, just as they do now for the Model 3 SR today. I think that (for the moment) they will probably use the new 4680 batteries solely in the Model Y, Performance for this year.
Adam wrote on April 7, 2022 - 1:46pm Permalink
What about MY LR? Texas or Fremont, 4680 or what?
tangible wrote on April 7, 2022 - 3:51pm Permalink
Yeah, that’s why exactly ZERO Model Y cars on the lot outside Giga Texas have red brake calipers or rear deck spoilers. Wishful thinking doesn’t get it done.
Tangible wrote on April 7, 2022 - 3:57pm Permalink
I think Texas will concentrate on MYLR with 4680 as it’s the largest backlog. Eventually it will do MYP as well, but not before Fremont converts their production line to handle 4680, so both factories will make all MY variants MY AWD will use LFP batteries shipped in from China and be done primarily at Fremont, at least initially.