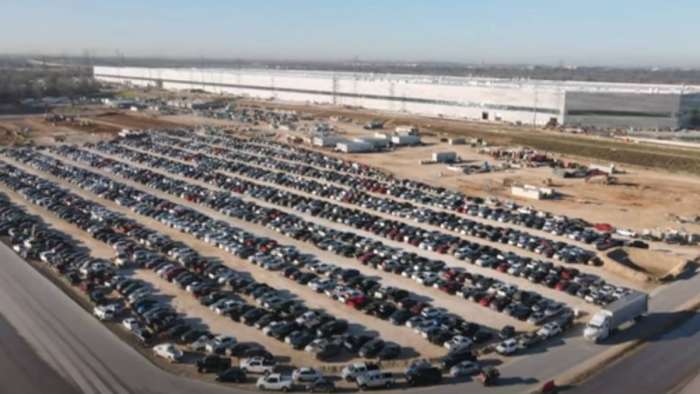 Giga Texas About to Kickoff the EV Revolution

Giga Texas is about to start deliveries next month and this will be the beginning of the EV revolution - a continued upward trend of the S Curve of EV (electric vehicles) adoption.
Advertisement

Giga Texas and the EV Revolution

We can see a stunning 360 degree view of Giga Texas as the factory is about to kickoff the EV revolution next month. What is the EV revolution? It is the continuing of the S Curve of EV adoption where more and more people are going to buy electric vehicles (especially from Tesla) and then tell their friends who will then place an order. In the next decade, the world will be flooded with electric vehicles.

Recently, Joe Tegtmeyer release a drone video circling Giga Texas. This shows the facility looking complete after 2 years of development. We should see EVs starting delivery before the end of Q1, 2021. Giga Texas is massive - massive! The drone lost about 50% of its battery just to do a full fly around of Giga Texas.

Tesla's production is very integrated in Giga Texas. The Fremont and Shanghai factory were the first versions of Tesla's gigafactories. Giga Texas now has 3 main sections. There are gaps between these sections large enough for semi trucks to move around. Things get interesting here because Tesla Fremont is the most productive car factory in the country at 8,550 cars per week/51 cars per hour. This is more productive than all other auto plants in the U.S., including Toyota, BMW, and Ford.

Tesla's Fremont factory will be its least efficient factory in the long run - even though it is still very efficient. Tesla acquired this factory, which used to be a place ICE cars were built. With the success of Giga Shanghai, Tesla can be confident that it can ramp production at a new factory and Giga Texas should be able to do multiple millions of vehicles per year.

Elon Musk wants to automate Giga Texas as much as possible, so much so that it would look like it was straight out of a sci-fi movie. There are projects like Tesla Bot that will require more space and Giga Texas may be the place that gets done.

There is room to grow even at Giga Texas. There are empty lots around the current gigantic Giga Texas where expansion can take place. Even so, Giga Texas will be able to produce many electric vehicles just with the main building.

There's been word from Elon Musk that Giga Texas will have a gran opening party and it will take place in early 2022. I expect that this grand opening party will be similar to the one Giga Berlin had, but with a larger gathering. Giga Texas has less strict rules and enforcements than Giga Berlin, so Tesla will be able to do more.

It's a very exciting time to be alive and witness the EV revolution. Giga Texas is going to kick this off next month and I expect to see a very rapid ramp of production from this gigafactory as it dwarfs Fremont in production and production speed. In particular, the 4680 batteries in the Model Y and what the technical specs of that vehicle are of interest.

Will Giga Texas kickoff the EV revolution? Where will Tesla build other gigafactories?

Bernardo Guzman wrote on February 16, 2022 - 5:12pm Permalink
I am also an investor and would appreciate any news regarding Tesla ,thank you.