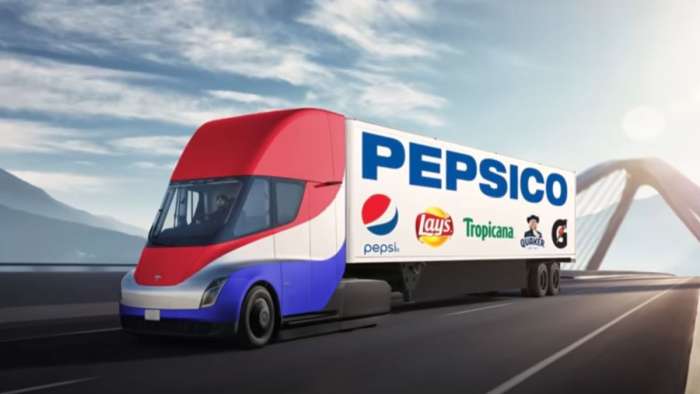 Tesla is producing Tesla Semis for PepsiCo and using 4680 batteries and this should be by the end of January, 2022. The Semis were built in Giga Nevada and will use the new 4680 battery cells. Pepsi is installing megachargers at their facility in California.
Advertisement

At PepsiCo's Modesto, Frito Lay facility. There will be 15 pre production Tesla Semis which will be used for testing. The Semis were built in Giga Nevada and will use the new 4680 battery cells.

Pepsi is installing several megachargers at their California facility. Last November, PepsiCo CEO, was looking forward to the first deliveries of the Tesla Semi. The statement was quite shocking as Elon Musk has been very conservative about the release of the Tesla semi.

Tesla is giving the semi more love. There are sightings of the Tesla semi reported near Giga Nevada. It seemed that PepsiCo would have to wait longer to get the Semis, but now it seems they are getting some Semis and will be able to test with them and take full deliver by the end of January, 2022.

The Semismegachargers will be connected to a megapack battery farm from Tesla. The power will be about 1.5 MW, which will allow the semi to charge its massive battery pack fairly quickly. This is up from the previous 1 MW that it was thought the Semis could only charge at.

The development of the fully electric Tesla semi has been going on behind the scenes. Now we are seeing sightings of the semi and a deal done with PepsiCo. They are going to use a limited quantity of Semis for testing.

I think there will be testing done with the Semis with PepsiCo, and once the "bugs" have been worked out with the process and any charging issues, the semi will start to enter mass production.

How many Semis will be sold and how much profit they will be for Tesla is yet to be seen. We need to see Tesla's Q1, 2022 earnings report to see the impact of the small numbers of Semis being used.

Tesla is producing 4680 batteries near Fremont (and with lines at Giga Texas) and putting them into pre production vehicles and these will be necessary for the Tesla semi to operate properly and efficiently.

I'd expect as 2022 goes on that we'll hear more customers starting to use a limited quantity of Tesla Semis and toward the end of the year, we'll start to see a larger ramp of vehicles.

How many Tesla Semis will be delivered in 2022? What other customers besides PepsiCo will buy Tesla Semis?