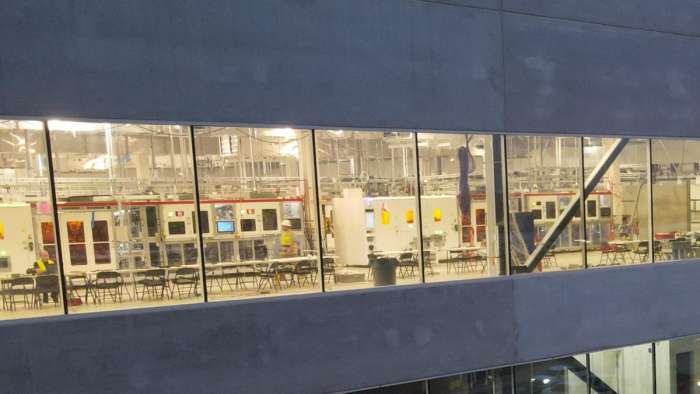 There are new pictures of the 4680 battery assembly line at Giga Texas, suggesting that 4680 battery production is getting ready to start. These reports come from Joe Tegtmeyer, a drone operator who surveys Giga Texas regularly.
Advertisement

With the recent pictures of a 4680 battery assembly line at Texas, one has to wonder if 4680 battery cell production is going to start soon. 4680 batteries will lower the cost of production and battery usage for Tesla, which will further increase their margins on their vehicles.

A Twitter commenter noted that Joe Tegtmeyer appears to have special permission to be able to fly his drone so close to the Giga Texas factory. From the looks of things, it looks like Giga Texas is getting priority for 4680 batteries instead of Giga Berlin for first production.

This makes sense, since the EU would have forced Tesla to make their 4680 batteries at Giga Berlin first due to a clause if Tesla accepted funding from the EU. Fortunately, Tesla rejected that EU funding, which would have been about $1.5 billion.

If you look carefully at the picture, you can see a ton of chairs. Elon Musk once said that chairs are underrated.

You can also see that there is a floor below that doesn't appear to be operational yet. Tesla is operating where they can and isn't waiting for the entire factory to be setup to start working. Tesla is smart and working within agile principles.

When Will Tesla Open Up Giga Texas?

In some respects, Giga Texas is already open and operational. There is work being done and employees are getting paid to do that work. There just aren't any production cars rolling off the assembly line yet. We think that will happen in Q1, 2022 with first deliveries of Model Y vehicles.

Elon Musk even said there is going to be a grand opening event for Giga Texas in early 2022.

Dave Lee, a prominent Tesla investor also says that the 4680 equipment being in Austin, Texas is very bullish for Tesla because you aren't going to install all the equipment for it unless you've already worked out the big issues on the Tesla Fremont 4680 pilot line. Tesla could be starting 4680 cell production soon.

Is this 4680 battery line a bullish sign for Tesla? Or is it just a test line working out any issues and 4680 battery production is still a ways a way?