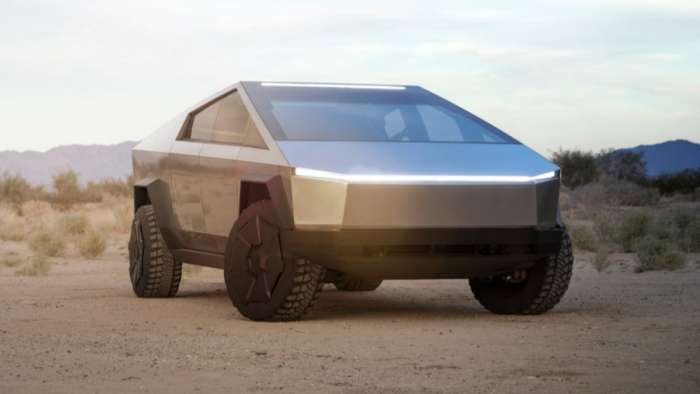 Tesla has released more information about the Cybertruck with Elon Musk stating that it will be released initially with dual and quad motor variations - and be able to move diagonally like a crab. It's going to have post apocalyptic features and be amazing. So, let's look at the bad news.
Advertisement

The Cybertruck Has Good News... and Bad News

There is some bad news for the Tesla Cybertruck for people who want to purchase one. However, this is good news if you hold Tesla stock.

Tesla recently announced that it would be starting with the dual and quad motor versions of the Cybertruck. Tesla has scrapped the single motor Cybertruck for now. That leaves us with dual, tri, and quad motor options and it looks like the tri motor is not going to be available until possibly a later date.

Elon Musk stated that the Cybertruck will have post apocalyptic technology and be able to move sideways like a crab. Have you ever heard any other CEO say such things? Only Elon Musk is capable of saying something like this and actually delivering on his promise.

The good news is that the Cybertruck will be a unique and powerful vehicle with many different features, including camping add-ons and the ability to have solar panels that charge the truck while it is parked or driving. It will be a full featured vehicle and Tesla will sell every Cybertruck it makes.

The bad news is if you ordered a single motor Cybertruck for $40,000. These are not going to come into existence any time soon. After all, the Model 3 single motor/rear wheel drive vehicle is now selling for about $45,000. This is a large increase in price from even a few months ago.

Now on to the tri-motor Cybertruck which isn't going to be sold now. This was going to sell for $69,990, but I think the quad-motor variant is going to sell for around $79,000. Tesla is going to have to increase the price of this and add the extra motor - especially now that they see how much charge gets lost when towing heavy amounts of weight.

If you then take the add-ons like solar panels and camping ability, you're likely going to see a fully decked out Cybertruck costing closer to $90,000. I think those that were expecting cheaper prices are going to be very disappointed. Those who have Tesla stock should be happy with the results though.

At some point, the demand for the Cybertruck will come down, but it won't be for many years. I would expect to see prices come down when Tesla is better able to meet demand.

What do you think about this bad news for the Cybertruck? Is it bad that the prices are going to increase? Will you be getting a Cybertruck?