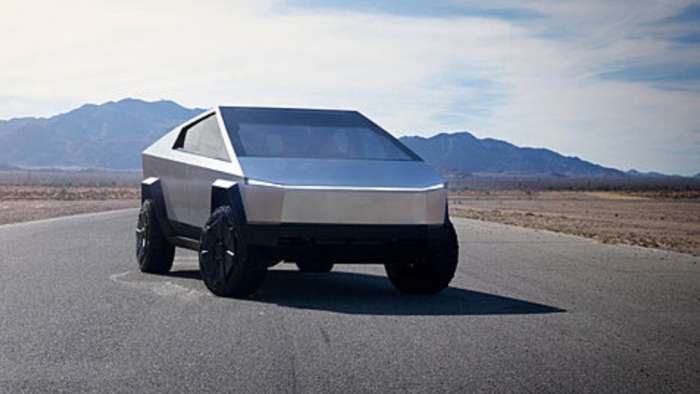 There is a Tweet circulating on social media claiming to be the image of the new beta version of Tesla Cybertruck. Why is this image circulating around now? This could at least mean that Tesla is getting one step closer to the production of the Cybertruck and the release of Tesla's electric truck may happen sooner than expected.
Advertisement

I just found this really amazing one… it’s pretty hard to make out the details though. pic.twitter.com/arwPe5QYNu

Things are starting to heat up regarding the Tesla Cybertruck and I am wondering if there is going to be some sort of announcement from Tesla or Elon Musk in the coming months.

From the following Tweet, we can see that there is a new beta image of the Cybertruck circulating around the Internet. Why is this happening now? If you know WholeMarsBlog, you will know that he is one of Tesla's biggest supporters and personally knows Elon Musk. He is on top of breaking news regarding Tesla and is a big supporter of FSD (full self-driving).

Generally, when we start seeing clues to something, there's a good chance that there is something that is going to be announced soon. My hope is that the latest rumors about the Cybertruck are true and that we are closer to a release date than we think. We also saw Tesla sending a text to a Cybertruck reservation holder which may be a clue production is nearing.

My Questions About the Cybertruck

If Tesla is going to start releasing news about the Cybertruck, then I want to know the following:

Is the release date of the Cybertruck going to be sooner than late 2022?

The reason this is important is because I and many others are budgeting for the purchase of the Cybertruck and if it is going to be delivered sooner than that, then customers will want to know so they can budget accordingly.

Is the Cybertruck Going to Look Like What Was Unveiled?

The Cybertruck was unveiled on November 21, 2019. In it, Elon Musk showed the Cybertruck and talked about it and how it took up less space than the Ford F-150. I would like to know if the Cybertruck is going to look exactly like it did in the unveiling or if there are planned changes. I have a hunch, based on the "beta" image floating around, that the final design of the Cybertruck may look different.

Will the CyberTruck Have Armor Glass That Doesn't Break?

Will the Cybertruck Cost the Same?

After all, Tesla has raised the prices of the Model 3, Model Y, and Model S vehicles several times this year and is still selling out well into next year. Can the Cybertruck still be sold for $79,000 for the tri-motor that gets 500 miles of range? That seems like a steal now based on current prices...

What Accessories Will Be Available?

Will the Cybertruck have the option for solar panels - that's something that Elon Musk has said, but will that actually be something you can get at the time of purchase? I hope so. Are there going to be camper options to buy with it, or other add-ons that come out like a stove? I'm very interested in the accessories of the Cybertruck.

There's been a lot of hot topics on the Cybertruck lately and this beta image is yet another reason to wonder if Tesla has something up there sleeve to unveil for us in the coming months. I for one can only hope!

Update: According to a new information shared with Torque News, Tesla may have over 3 million Cybertruck orders by October 12, 2021.

Pants wrote on November 25, 2021 - 6:20am Permalink
Umm... That pic was one of the teaser photos from BEFORE the Cybertruck was originally unvailed.

LG's New EV Battery Plant Is a Welcome News for Tesla
Tesla Giga Berlin's New Hurdle: It's Not Only the Gov't, but Now Tesla Itself
END_OF_DOCUMENT_TOKEN_TO_BE_REPLACED