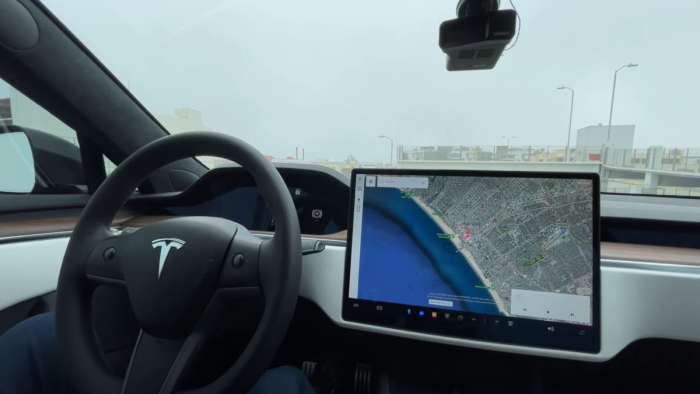 A Model S Plaid With a Regular Steering Wheel?

An owner of a Tesla Model S Plaid vehicle has been seen driving with what appears to be a normal steering wheel. Did this really happen or are we all being tricked? Let's find out!
Advertisement

A Model S Plaid With a Regular Steering Wheel?

At first glance, this video doesn't seem to be anything special.

According to electrik.co, the owner of the Model S Plaid is Ryan Huber and he is one of the first people to take on the project of replacing the yoke steering wheel with a regular one.

He's the only one I've seen to actually show a new steering wheel in the Model S Plaid. However, his video is confusing and doesn't show the car doing much. I'd of liked to see some acceleration and some explanation in the video of what is happening.

According to electrik.co, Ryan says:

“When I started on this project, I planned to make everything, including the Model 3 wheel, work. Over the time I’ve had the car, I’d grown accustomed the yoke, minus the haptic controls, which remain awful (even in the new version). I planned to set the car up as Yoke + stalks for my normal config, and to toss the round wheel on for fun, rarely. But then I got the controls on the round wheel working, and I’m not going back to the Yoke.”

It appears that Ryan just does not like the yoke steering wheel of the Model S Plaid. I've heard complaints from others as well.

Are Others Going to Do This More Now?

According to electrik.co, Ryan plans to make his work available on Github. One of the nice things about a Tesla being a computer on wheels is the chance for people to make modifications - and for Tesla to rapidly improve the car, using software.

No seriously, there is a Github repository for this project Ryan is working on. If you are a software engineer, this is something you will probably want to nerd out to.

I think others are going to start tinkering more with their Tesla vehicle and see what they can do. I actually think this is a really good thing and if I were Tesla, I would make it easier to make modifications, but make it so that you could only use a yoke or a regular steering wheel and it had to be from a Tesla vehicle.

If this catches on enough, Tesla could sell steering wheels on its website and make them interchangeable in its vehicles. That would be a first and something never before seen in the auto industry. On the other hand, there may not be enough demand for Tesla to invest any resources in that.

So far, this seems to be legit. I'm eagerly awaiting further updates.

What do you think about this Tesla Model S Plaid having a regular steering wheel? Will Ryan be able to make this project work and make it open source?

LG's New EV Battery Plant Is a Welcome News for Tesla
Tesla Giga Berlin's New Hurdle: It's Not Only the Gov't, but Now Tesla Itself
END_OF_DOCUMENT_TOKEN_TO_BE_REPLACED