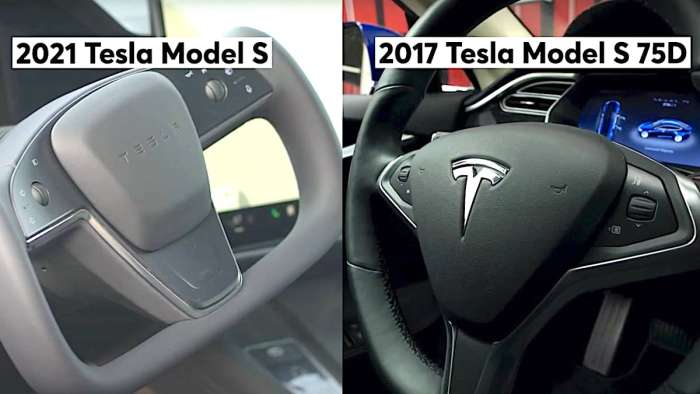 Ten test drivers offer their latest review of what they found when testing out Tesla’s yoke steering during a recent road test analysis.
Advertisement

It’s been a few months now since the introduction of Tesla’s yoke style non-wheel steering wheel that has led to much discussion over whether it was a good change from the traditional round steering wheel…or a boondoggle.

To be fair, anytime something new is introduced, you can expect to hear a lot of moaning and complaints just because many of us tend to be resistant to change of any sort. It’s human nature. Which makes this a good time to return to the Tesla yoke and see how it fares under road test analysis now that we’ve all had some time to adjust to the idea and perhaps even had time to adjust our driving habits with the yoke.

But has the passage of time been enough to smooth the choppy waters of discourse? Is the public really ready to accept the yoke? As it turns out, if you want to own a Tesla, you may have no say in this. And that’s too bad, per a Consumer Reports review reports to readers that the yoke is not just awkward, but potentially unsafe during emergency driving conditions.

According to a recent CR review:

Tesla swapped the tried-and-true round steering wheel for a flat-bottomed, rectangular yoke reminiscent of what pilots use to steer an airplane. A traditional circular steering wheel is no longer available on the Model S nor on the mechanically related Model X SUV, even as an option. And that’s not the only steering wheel change. Flat, touch-sensitive buttons on the yoke replaced the vehicle’s turn signal and windshield wiper stalks. Those buttons also are how drivers now flash their high-beams or honk the horn.

And that appears to the root of CR’s less-than-positive take on whether the yoke should remain a non-optional feature for Tesla due to touch-sensitive controls that can easily be inadvertently engaged at the worst possible moments and direct the driver’s attention away from the road.

In fact, 10 test drivers from CR reported that they noted repeated instances of the yoke while driving having, “…slipped out of their hands during a turn, every ache and pain from gripping the handles during a highway cruise, every time a tester’s hands didn’t fit on the yoke’s grips, every time we accidentally honked the horn while trying to make a turn, and every time we had to look down to see which turn signal was which….”

The test drivers expressed some shared confusion over why in spite of some really good moves Tesla has made such as leading the move toward providing software updates easily and directly to vehicles, that Tesla (or Musk to be specific) saw it necessary to depart from the traditional steering wheel design that is, “so essential, ubiquitous, and universally understood, that to change it for the sake of changing it seems both foolish and foolhardy…” for purely cosmetic reasons so as not to “be boring.”

ONE PRO AND SEVERAL CONS TOWARD THE YOKE

But it’s not all bad news. The test drivers did point out at least one benefit that is a pro to the yoke:

“The yoke gives a panoramic view of the Model S’ wide gauge cluster (the screen or gauges that traditionally sit behind the steering wheel) but its bottom right corner blocks a portion of the center control panel, which is also the location of the one button that displays the all-important vehicle controls menu.”

However, in spite of this one benefit to the yoke, the drivers found that the following cons did not make them fans of a flat-bottomed, rectangular style steering wheel.

Trouble Making Turns---Backing out of driveways, making a sharp turn into parking lots, and similar maneuvers turned out to be problematic when it came to managing a good grip---especially for hands that are relatively small for such a large yoke body.

Hard to Hold On To---The drivers complained that the yoke “forces” a driver to hold unnaturally tight on the yoke’s body resulting in fatigue and pain---even after a few minutes of driving. Plus, during turns at higher speeds, there is noted difficulty in “catching a grip” should the yoke slip from a driver’s fingers. But even more annoying was complaint that, “…the odd-shaped yoke requires the driver to exert various different degrees of push and pull forces, which can cause the car to lurch instead of steering smoothly.”

Missed Signals---Making a distinction between the correct button to press while the yoke is not at a purely horizontal level can lead to confusion, having to look away from the road to the yoke, and having differing pressure sensitivities for different functions, all added to awkward and possibly hazardous driving. According to CR, some drivers admitted to skipping the use of turn signals just to avoid the hassle of pushing the right button the correct way.

“The lack of a turn signal stalk actually bothers me even more than the steering wheel,” stated one of the test drivers.

Similar to this were also complaints of button fumbling that led to unintentional high-beam, windshield wiper, and embarrassing horn engagement.

High-Speed Driving---While the yoke is well suited for high speed racing on a track with anticipated curves, driving at higher speeds on an actual common roadway where debris, stopped vehicles or other obstacles need to be maneuvered around quickly and precisely, led to the message that the yoke fails markedly in this consideration.

For more details about how the tests were performed and what the test drivers experienced, here is a YouTube video of the yoke road test analysis:

All of this begs a question...or three at least: Is Musks's insistence of a yoke-only Tesla founded on actual benefits to his customers; or is it just a matter of creative differences and refusal to admit that sometimes Tesla misses the mark? Why not settle the matter and let the customer have the steering wheel option he or she prefers rather than a "It's my way, or no way" message? And, where are the measurable tests and data to objectively address the answer to the yoke question?

We want to hear from you: Let us know in the comments section below whether your experience matches what the Consumer Reports test drivers reported when using the yoke in your Tesla. And/or, do you think that the steering wheel type should be an option provided by Tesla to its customers?

For additional recently released videos related to Tesla ownership, check out this one about a non-Tesla solution for Tesla owners when battery problems happen.

Bob Cottrell wrote on September 18, 2021 - 2:59pm Permalink
Definitely should be an option. I don't object to the idea of the yoke, but it's not for me. Also, anything that makes you look away from the road is stupid (including the big tablet in the middle of the dashboard).
DeanMcManis wrote on September 20, 2021 - 11:01am Permalink
The yolk steering wheel is definitely a gimmack, with more issues than benefits. Still, if i were lucky enough to be able to own a Model S Plaid, I would probably be fine with the yolk steering "wheel". I would also be fine with the forward reverse controls, and I'm sure that I would quickly get used to the directional indicators. But, I think that Tesla should have placed the right signal button on the right side, and left one on the left. That's a no brainer. Getting a clear view of the important car info could have been accomplished by using a heads up display. I do think that Tesla should offer a round wheel and decide on the future of the yolk steering based on the take rate for the round wheel option. There is an age-old saying of "Don't try to reinvent the wheel". In this case, it's reinventing the steering wheel. The other similar saying is "If it ain't broke, don'e fix it." Which speaks for itself.
Timothy Boyer wrote on September 20, 2021 - 5:39pm Permalink
My other favorite saying in mechanics is "Don't force it! Get a bigger hammer!:
DeanMcManis wrote on September 21, 2021 - 2:26am Permalink
Yeah, and if it breaks, it needed replacing anyway.
Dan Staringer wrote on October 5, 2021 - 8:20pm Permalink
I've now been driving my new Tesla Model S for 2 weeks with the yoke steering wheel and frankly, I don't want to go back to a circular steering wheel. In many ways it is a plus. I control turns easier, I hold turns easier and it is much easier on the on the hands and fingers to steer the car. It's taking me longer to get used to the turn signals and but the yoke itself is excellent.