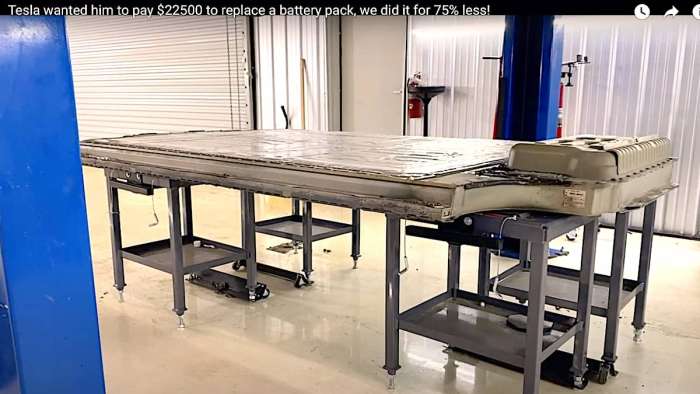 Are you a Tesla owner, but your car is nearing its end-of-warranty period or have been told by a Tesla Service Center that you need to buy a part that’s at a cost which is a significant portion toward buying a new Tesla? This non-Tesla sanctioned garage strikes again with a rescue that saves another Tesla owner---this time, over $17,000!
Advertisement

Reputedly, EV owners in Canada are recently discovering that relatively new battery-powered electric vehicles are becoming somewhat expensive just a few years after purchasing new. The problem? EV batteries that are falling short of their expected lives and costing the owners a significant amount of money to replace with a new battery…or vehicle.

While unfortunate, this is not unexpected. Only now are we beginning to have some clear idea of just how long EV batteries will likely really last. And, quite frankly, Tesla has dominated the EV battery arena with the best EV batteries today and it’s because of these Tesla battery tech secrets. In fact, the battery is so good, some owners even take used old Tesla batteries to convert ICE vehicles into homemade EVs.

However, this article is not about Tesla battery technology per se, but is more about the cost of having your Tesla serviced when it comes to battery-related or other problems that occur with your Tesla.

Earlier we reported about one Tesla owner who managed to avoid a Tesla Service Center cost of $16,000 for his Tesla by finding a garage that managed to do it for only $700! The Tesla Service Center had earlier told the owner that his repair necessitated removal of his old battery and replacement with a new one. However, a non-Tesla sanctioned garage found a solution and took care of the problem at a fraction of the earlier estimated cost.

As it turns out, that same garage---YouTuber Rich Rebuilds’ Electrified Garage---came to the rescue once again and helped a Tesla owner fix his battery woes without having to resort to buying a new Tesla battery for his Model S---at a final repair bill of $5,000...a savings of over $17,000!

In the past, Tesla has taken some criticism for its lack of Service Center services equal to the quality of their vehicle. And not without just cause. No one wants to have to spend a large amount of money to buy a Tesla, only to have to turn around and pay an exorbitant amount of money for a repair---if the Service Center can even do it---later on.

Case in point: Here’s a new video from Rich Rebuilds’ Electrified Garage on how they saved another Tesla owner from paying more than needed to repair his Tesla and get him back on the road to enjoy his ride. In addition, in the video, Rich makes some valid points about some of Tesla’s failings toward its customers.

And finally… What are your thoughts on Tesla Service Centerand their costs? Please let us know in the comments section how you as a Tesla owner view this problem.

Watch our recent video on Tesla Model Y one year ownership on our Twitter channel and subscribe/follow for daily Tesla news.

A Tesla Model Y owner on Reddit provides his one-year review explaining the pros and cons of the Model Y electric crossover after one year of ownership. https://t.co/TSQEcUXwPk
-#Tesla #ModelYOneYearReview #TeslaModelY #ModelY pic.twitter.com/qyJPZyPZr7

COMING UP NEXT: Diagnosing a steering problem with 3 easy tests.