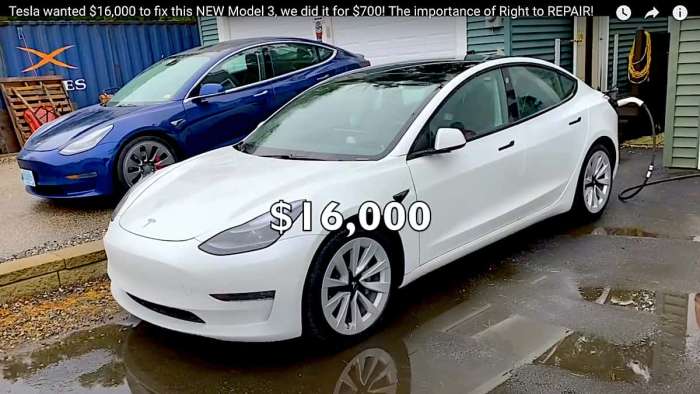 Is your Tesla warranty near its end? Then you just may want to see this video to discover what some see as a Tesla disservice service to its customers when it comes to repairs on your Tesla. This video is a wild ride to watch, but important as we learn how thousands of dollars in Tesla repair costs were saved by an actual Tesla owner.
Advertisement

A Reddit post this morning titled “A Repair Would Cost $16,000 at Tesla: the Electrified Garage Did It for $700” by Reddit member u/worriedpast grabbed my attention not only because I find All-Things-Tesla fascinating, but also because I like to repair my vehicles and pass on information to consumers how they can save money with their used cars. 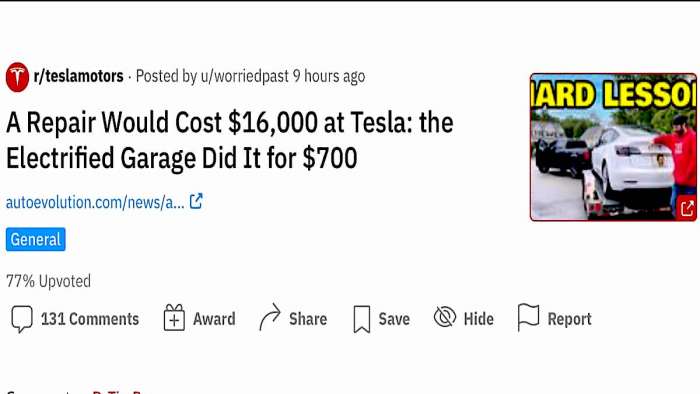 The Reddit post provided a link to the “autoevolution.com" website, which provides some rather creatively written content about vehicles that is informative as well as entertaining. In particular, the linked website article made a good point of what some see as Tesla’s disservice service plan for its customers:

“The bottom line is that Tesla Service Centers do not perform part replacements, just assembly replacements. In other words, if something small breaks or has to be replaced, they replace the whole module that includes it.”

While this kind of service is good for the company and its stockholders, it can lead to some seriously high repair bills by a Tesla Service Center when something goes wrong with their Tesla.

One case in point was a referenced article posted in the popular website CleanTechnica on May 2, 2021 about one journalist’s test drive in a Tesla with her family including the family dog that resulted in a dog vomit in the seat buckle issue that put the journalist at risk of having to cough up big bucks to replace not just the seat buckle, but the entire second row seat assembly!

More directly referenced in the Reddit post, however, was an example of at least one Tesla owner who saved thousands of dollars by avoiding his given Tesla Service Center advice and instead, went to “The Electrified Garage” (The First Ground-up Tesla and EV-Only Repair and Customization Facility) where a much less expensive and sensible solution was found---an actual repair rather than replacement.

Without giving away too much more information of the who, what, where, why and how of this Tesla owner’s experience, here’s a video from the YouTube Channel “Rich Rebuilds” that discusses the problems some Tesla customers face when things go wrong with their Tesla.

Be forewarned, this video is not exactly Tesla-friendly and is filled with some level of self-promotion, but there’s no denying it is entertaining and informative. Plus, you get to see what exactly was repaired and how by a non-Tesla, Tesla repair service.

How Tesla does business is Tesla’s business…to a point. Which brings us to an important question (or two or three or…): Has our throwaway society now moved into the automotive world because of the EV revolution? And, is the RIGHT TO REPAIR something we should be concerned about?

We would like to hear your thoughts. Please respond in the comments section below and let us know (especially if you own a Tesla) what you think of this video and the message it sends.

Coming Up Next: Saving money on the tires you buy...or don't buy.

Jeremy Johnson wrote on July 13, 2021 - 4:59pm Permalink
Very cool to see. Tesla's Achilles heel is its ability to do custom repairs and customer service in general. Maybe they will buy this small company out and expand them?
DeanMcManis wrote on July 17, 2021 - 9:11pm Permalink
As much as this does highlight a repair issue with Tesla, it is totally common throughout the auto industry. There are whole YouTube channels devoted to people buying expensive cars from auto dismantlers that were totaled by the insurance company after the cost for the auto dealer was more than the value of the vehicle. One key point is that nearly all auto dealerships make most of their money from service work, and they will choose to replace any broken parts with new, expensive ones as a point of liability (and profit). The dealerships and large auto repair shops know that most all of the time the person's car insurance will be paying the $$$ bill, and again if it is too much, they just total the car. But Tesla doesn't have dealerships. They only have factory repair shops, and more recently authorized repair shops. Being EVs, Teslas need less maintenance and repair work compared to gas powered vehicles. But it has been a shortcoming that you cannot just take Tesla's to a skilled (unapproved) mechanic for repairs and have the car remain supported by Tesla, get software update, or be able to use the Supercharger network. As much as this is an issue that Tesla needs to work on, it points to a much larger auto industry issue called "Right to Repair".