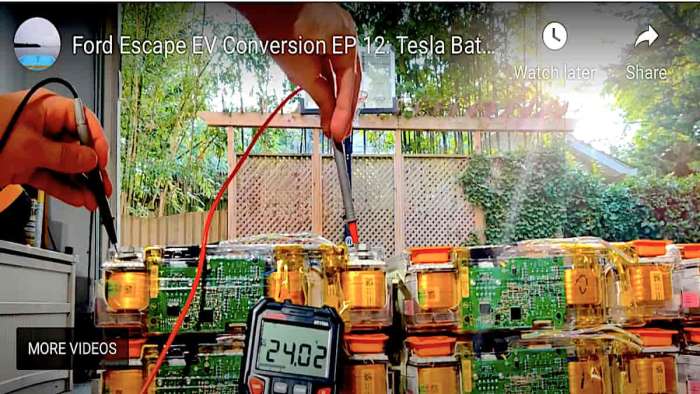 Looking for a creative but risky project using old Tesla Battery Packs? Here’s one ICE owner who is showing his project-in-progress discussing the Tesla battery packs he is using to convert his 2010 Ford Escape into a Tesla battery-powered EV. A must-see video as he explains issues that can go terribly wrong with thermal runaway and other dangers with the cell packs as he modifies the modules for use in his future ICE converted to EV wheels.
Advertisement

You’ve gotta admire creativity. That’s the first thought that came to my mind after seeing a just released video about an ICE owner who is converting his 4-cylinder, 5-speed manual transmission 2010 Ford Escape into an EV using battery packs from a 2017 Tesla Model X 75D with 31k miles on it.

There is a lot of interest in seeing these battery packs up close as Tesla owners debate the pluses and minuses of how Tesla has evolved its development of the 18650, 2170 and 4680 battery cells used in the modules powering Tesla’s finest vehicles. Moreover, there is some interesting debate over why some Tesla models have specific battery cells over other models.

If you are considering an ambitious project using old Tesla Battery packs and converting an ICE vehicle into an Electric vehicle, now is your chance to listen to someone who discusses how the modules are designed and potential problems that could lead to disaster.

Without further delay, sit back and enjoy this video and imagine the possibilities as used battery packs will eventually become increasing available for the DIY engineering-minded car enthusiast.

For more about Tesla battery development, be sure to check out this informative article and video titled “From Lithium Mine To Tesla Battery Line.” And, if you are looking for a different type of project for your Tesla, here's how one Tesla owner built his own automated charging station in his garage.

COMING UP NEXT: How tire service centers can damage your brakes.