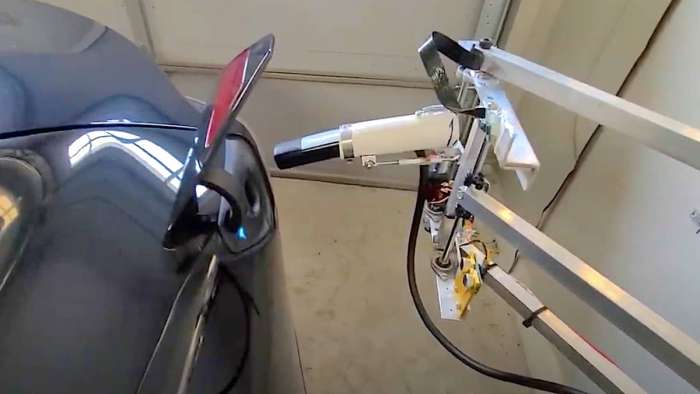 A recent YouTube video shows how one Tesla owner was able to automate his EV charging needs using a Raspberry Pi microcontroller and some mechanical hardware to turn his garage into a hands-off charging station.
Advertisement

While we often hear about how innovative Elon Musk and his engineers are at Tesla, it turns out that some Tesla owners are showing that they too can demonstrate some equally impressive innovation as they find ways to tap into and supplement their Tesla vehicles, as well as expose some security flaws in Tesla.

For example, a quick search on the web reveals a relatively simple way to create automatic dashcam backups in your Model 3 “…that will not only receive all of your dashcam and Sentry Mode footage, but it will automatically upload that footage to your computer when you connect to your home Wi-Fi…” using a Raspberry Pi microcontroller.

And just last fall, an enterprising PhD student demonstrated just how easy it was to hack into a Tesla Model X with a modified key fob, a salvaged engine control unit (ECU), and a Raspberry Pi.

Furthermore, although not a Pi-related story, just last April we reported about how that a drone was used to fly above a Tesla Model X and hack wirelessly into its control system.

For some time now the idea of going plug-less with EV charging has peaked our interest. Most of the ideas are based on some form of inductive charging where your Tesla or other EV can be parked over or near a sensored inductive pad that would be able to communicate with the EV and determine charging parameters while initiating a charging session while at a parking space or in your garage.

Problems with this type of charging, however, have become roadblocks to its general acceptance due to that it often involves the loss of energy as waste and a resulting increase in cost per charge making it undesirable from a both a cost and green perspective.

One idea recently posted that does make the idea of using inductive charging attractive is the use of roadways equipped with inductive plates in a “charging lane” that allows EVs to charge automatically while driving. The biggest benefit it that no longer would we need to install so many charging stations throughout a city; and, throughout the countryside to meet the challenges of supporting a predominantly EV society in the future.

For Now, It’s Still a Plug and Play World

One of the main reasons for wanting a charging station in your garage is convenience. Reputedly, there have been instances of ICE vehicles blocking EV charging stations in the public sector. Plus, it’s just nicer to do things from home and not have to drive elsewhere to charge your vehicle.

That said, earlier we reported about how one EV owner managed to build an automatic charging arm a few years ago in his garage.

More recently, an improved version of a homebuilt EV charging station in a Tesla owner’s garage was released that appears to be a marked improvement over the earlier described one. This auto charger uses a Raspberry Pi as the controller to handle the sensors and motors needed for automatic positioning of a charging plug into a Tesla’s charging port. Below is a YouTube video showcasing the creation.

We Want To Hear From You

If you or someone you know has some interesting home-built innovations of their own with their Tesla or other EV, let us know in the comments section below.

For more about some creativity with a Tesla, here's one about how Smart Summon was used to trick a scoff law.