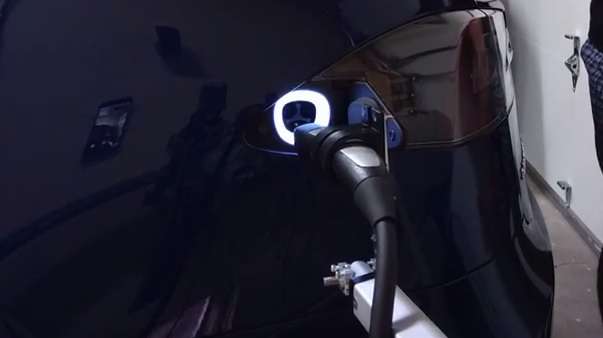 One Tesla Model S owner decided to change the way EVs are charged at home and created this auto charging arm for his Tesla, which automatically connects to the charger. Watch the video of his auto charger here and see how he made one.
Advertisement

Have you ever forgotten to charge your electric car at home or meant to do it and faced the fact of having a car without a charge in the morning? This is exactly the problem that one Tesla Model S owner wanted to fix by building his own at-home auto charging arm for his car.

D. Mital's auto charging arm does fantastic things. Using an API it senses where the charge port is, open the port (shown in the video demo) and connects the charger automatically.

"I built an auto charging arm for my evtron. It senses where the charge port is, opens the port (via API) and connects the charger. It is in very early stages of development and is less than a minimally viable prototype," writes Mital in one of the Tesla Owners forum. He still doesn't have a mechanism to remove the charger after his car is automatically charged at home. I wish Tesla also provided a special API based mechanism to unlatch the automatic charger arm. "I am thinking of another mechanical hack to add something on top of the charger to press that button, but looking for better ideas," he wrote.

Miltal wrote that he built this auto charger because from time to time he kept on forgetting to put the charger in. "Many times I put it in and then had to leave for something so then remove it and put it back on"

Mital wrote that he may productize it at some point. But now it's just a part time hobby.

The solution is really cool It's actually much better than using an inductive charging pad. Auto charging arm is like convenience without the extra loss of electricity. The cool thing is that since it works based off an API the owner doesn't have to be there during the process. "It opens the charge port from the API. You do need to put in your tesla ID and password into the API," says Mital.

Overall, this is a very interesting idea to auto charge your Tesla or any EV.

Alex20058 wrote on June 13, 2016 - 9:02pm Permalink
Is the wireless charging the way to go? What are the pros and cons of wireless charging vs auto charging for electric cars?
Dan wrote on June 13, 2016 - 9:24pm Permalink
The downside of wireless is that it's less efficient and slower. The speed is rising so it's getting close to being able to give a good overnight charge, but it'll always be less efficient. I think right now the efficiency loss is 10-20%, which adds up, but if in the future they can get it down to a few % then it'll work well for home charging. For high speed charging (e.g. Superchargers) we'll need the cord for a long time to come.
Armen Hareyan wrote on June 16, 2016 - 7:14pm Permalink
I think doing the wireless is the way to go, but not sure how costly it is to buy and install a wireless electric car charger.