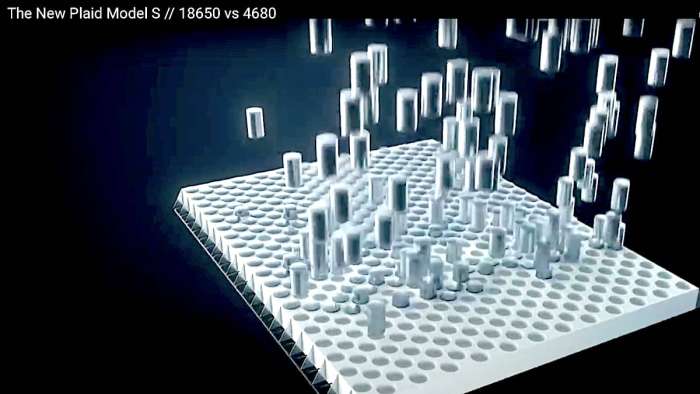 Why didn’t Tesla install the newer and more powerful 4680 battery in its recently released Model S Plaid? According to an expert on battery technology, their choice makes a lot of sense when you look at what is said at Tesla’s Quarterly meetings and not so much on public speculations and some sandbagging on Musk’s part.
Advertisement

In a recent YouTube Channel video The Limiting Factor---a website that focuses on creating technology videos about battery advancements---its creator Jordan Giesige who gave us “From Lithium Mine to Battery Line” not long ago, reveals his take on why Tesla chose the 18650 battery for the Model S Plaid over the newer 4680 battery cell pack.

Earlier Views on Why The 4680 Was Expected

Giesige originally predicted that Tesla would replace the 18650 battery with the newer 4680 cell. He tells us that the 4680 with its DBE (Dry Battery Electrode) tech would not only result in a higher energy density, higher power density, better electrode durability, and reduced heat generation battery, but would also make sense as it would remove Panasonic Japan from the economics of the battery supply chain and put the costs of production in-house in their Fremont facility. In addition, since the Model S and X are high-end vehicles, buyers would expect the vehicles to be outfitted with the latest in battery power technology.

Another factor influencing his previous prediction was that with the 4680 in place, the Asian battery factories would switch over from making 18650 cells to the preferable 2170 cells that are needed for the Model Y and other earlier Tesla vehicles worldwide.

However, his views began to change when Tesla announced on Battery Day that battery production was expected to increase substantially by 2022---a 100 GWh’s worth! In addition, it was revealed that the 4680 cells from Fremont would go to support Giga Berlin for the Model Y and Cybertruck in Austin, while the new Model S would use the legacy 18650 cell.

To Giesige this makes sense in that Tesla likely views itself so far ahead of the competition that it can afford to work with what they have on hand right now to give them time to saturate the market with vehicles consumers want, while at the same time give them time to ramp up their abilities to build factories to produce enough of the desired 4680 cells for future models.

It should be noted that when it was announced that the Model Plaid Plus was cancelled, many speculated that this meant that the new Model S Plaid released this year would naturally be fitted with the new 4680 cells---in spite of the fact that Musk stated only 3 months earlier that the Model S would be carrying the 18650 cell. But, because Musk can be cryptic with his communications, this is understandable considering what many recognize as his sandbagging style that helps build excitement about what Tesla is about to roll out next.

Furthermore, when Musk makes a comment that sounds like it is in reference to battery performance, it may be about something else that though performance-related, could be more about reducing vehicle weight and/or a change in the engine. So, the confusion.

However, in spite of all of this, Giesige makes an astute observation that it is when Musk says something at Quarterly Meetings, is when especial attention should be paid over what is said over other musings or communications on Musk’s part.

Another point made, is that Tesla sees the value in what the customer wants: Creature comforts and performance specs that are more accurate influencing factors over a customer fixating about which cell form factor is used in whatever vehicle they are considering on buying. Especially, when customers find out that the new Model S is the fastest charging vehicle in Tesla’s fleet that charges at 187 miles worth of range in just 15 minutes. A big plus that is likely (but not certain) due to changes in the cells’ silicon formulation.

And finally, the 18650 cell by Giesige’s estimates are equally up to the task of powering the new Tesla Model S and therefore not mandating that it would take the 4680 cell to observe the actual performance and charging capabilities demonstrated in the Model S Plaid.

The biggest reason Giesige sees in why the 18650 cell is used over the 4680 cell is that of supply. If Tesla were to use up its existing supply and current output of 4680 cells, then there may not be enough left over to support the Giga Berlin facility with the Model Y, the Austin facility with the Cybertruck and the Tesla Semi in Giga Nevada. With the estimated numbers of 4680 cells believed to be available this and next year, this would make sense.

Along this line of reasoning he points out that the Tesla Model S Plaid Plus was likely originally designed for the 4680 cell pack, but eventually determined to put the manufacture of other models at risk of not having enough of a supply of 4680 cells to do everything at once.

Giesige proposes that supply logistics in both battery materials and manufacture toward the 4680 are only a temporary setback, and that we may very well see the Model S outfitted with a drop-in type feature where the mounts on the frame could allow an easy switch ( i.e. upgrade toward a promised Plaid Plus level of range) by simply swapping out a structured pack of 4680 cells in place of an existing 18650 battery cell pack in the Model S Plaid (if the mounts match, which is unknown right now)---perhaps as early as 2023.

For more details about the likely reasons why Tesla chose the 18650 battery over the 4680 in the model S Plaid, be sure to check-out the YouTube Channel video below:

Al D wrote on June 25, 2021 - 3:55pm Permalink
After Panasonic commented that the 4680 cans are difficult to make without being contaminated and that their centers heat up too much, I'd abandon the idea if I were an EV maker.
Timothy Boyer wrote on June 26, 2021 - 9:15am Permalink
Good point, however, just 2 days ago with a new CEO in the works, Panasonic is stating that they are committing to fixing that problem--- https://www.tesmanian.com/blogs/tesmanian-blog/panasonic-will-make-a-large-investment-in-the-production-of-4680-battery-cells-for-tesla "Ad Astra Per Aspera" and all that. Hope they can do it.
Edward Francis wrote on June 27, 2021 - 10:39pm Permalink
A good piece, Tim. The use of more silicon was promised and could account for a few more watts stored, but the thermal performance of the new packs suggests something more is going on. Is it possible that tabless design has been added to the 18650 cells? This would account for faster charging times, lower dissipation, less internal heating....and therefore the need for heat pump in the thermal management system. Your thoughts?
Timothy Boyer wrote on June 28, 2021 - 10:17am Permalink
While I imagine that making the 18650 tabless is possible, it is unlikely that it has been done. The cost of re-tooling the machines used for 18650 production to incorporate a tabless design would most likely be cost prohibitive. But, Tesla has its secrets, so hopefully we will learn more in the near future. Thank you for the input.
Chris wrote on July 17, 2021 - 11:18pm Permalink
Tesla is using 1865 because it's battery development is late, it has existing 1865 capacity at suppliers, and it can't sell $100k gliders. This is Plan B.