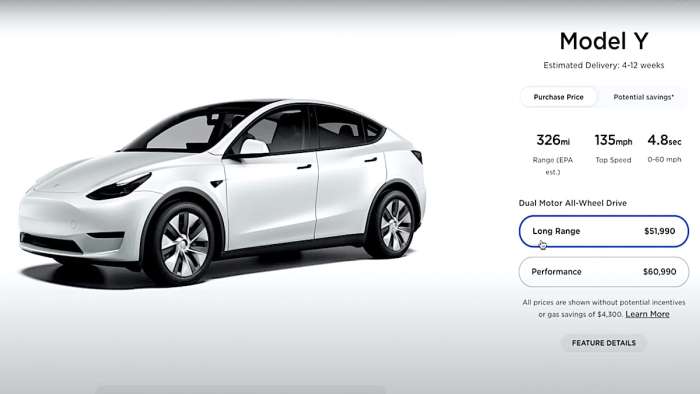 Pay Less for a New Tesla With These Tips

Follow this break-down by a new Tesla owner who reveals some very helpful tips and info that you can use to help you understand just how much a new stock Tesla can cost, and what you can do to insure that you are making a smart purchase.
Advertisement

Are you considering on taking that final plunge into your budget before buying a new Tesla? It’s not an easy decision; And one that should not be guided by your emotions and the hype of becoming a Tesla owner. However, it’s hard not to ignore that Tesla has received numerous positive reviews, including a new study that names one model of Tesla as, “…the best car to buy new rather than used.”

So, who better to hear what goes into buying a new Tesla from than a new Tesla owner who shares her breakdown of costs and savings that went into her purchase.

According to a recent YouTube video by new Tesla owner JQ Louise. “…we’ll be sharing with you how much we paid for our 2021 Tesla Model Y…sharing the base costs of our Tesla, taxes, fees, the financing costs through Tesla, as well as the Massachusetts Mor-EV rebate that we were able to get.”

Key Points of the Video:

• Decided to keep it stock to qualify for the Massachusetts Mor-EV rebate for electric vehicles, which was $2,500.00. To qualify for the EV rebate, had to choose a model with a base price below $50,000. Be forewarned, that state rebates do change and you have to be aware that what was accepted one week may be void the next.

• Note that base sticker prices do change—sometimes weekly, both up and down, so shop around and be prepared to make a deal quickly.

• On Tesla.com site she recommends choosing the “Purchase Price” selection to start the number crunching to see what exactly you are going to owe when you purchase your Tesla, and not get sidetracked with the “Potential Savings” selection of which “…you are not going to realize those savings until later on.”

• Trade-in value of her old car only brought in $350 credit and a new taxable total of $50,940. JQ Louise recommends if it is an old car, to first go to Carvana or CarMax to see what trade-in values they figure in at, and take that number to the Tesla dealer for negotiating.

• Checked out the cost of financing through Tesla, but found a better deal price matching against the cost through a bank. Tesla’s best rate was through Wells Fargo at a 2.49% rate. JQ Louise went to Bank of America and got a 2.04% rate; however, when presenting this to Tesla, Tesla came back with a better rate of 1.84% with another bank, which she finally chose to go with.

To see the video in its entirety, here it is for your viewing pleasure and comments to the buyer should you have any:

Although the video did not address this issue, the cost-conscious Tesla buyer will also want to consider what insurance can add to the final cost, especially since this recent report “Tesla Model Y Most Expensive Vehicle Model To Insure”---which states that “The Tesla Model Y costs more than twice as much to insure as a Ford F-150 or Toyota Rav4.”