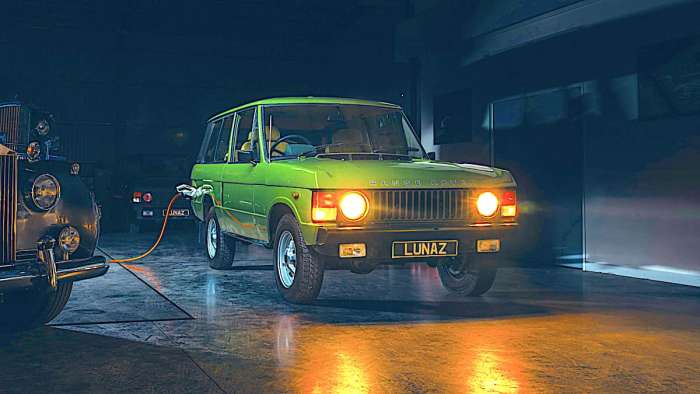 Looking for another EV automotive-related business investment that is unlike your typical modern day models? Here’s one recently invested in by a soccer superstar that advertises its business as one where, “We re-engineer and electrify to further the legacies of the most beautiful cars in the World.”
Advertisement

Lunaz is a privately owned British auto maker, that takes classic ICE vehicles and converts them into clean energy vehicles as a way to upcycle older vehicles “…with timeless aesthetics propelled by the powertrain of the future.”

Located in the UK Northhamptonshire village of Silverstone, it is in good company with the “Home of British Motor Racing”---the Silverstone Circuit.

While the company is primarily focused on Bentleys, Rolls-Royces and Jaguars, it has also done a remarkable job on a classic Range Rover as shown in this article’s lead photo.

According to the news piece, Beckham, whose investment arm already owns equity in startups connected to esports and products that help muscles recover after workouts, said in a statement: “I was drawn to the company through their work restoring some of the most beautiful classic cars through upcycling and electrification. Lunaz represents the very best of British ingenuity in both technology and design.”

However, as can be expected restoration, upcycling, and electrification comes at a pretty heady price: A converted Range Rover costs approximately $347,000; while an electrified Rolls-Royce Phantom V can start at a little over $700,000.

And, while it may sound like a lark for the superrich, their concept has greater implications when automotive upcycling is targeted to include less expensive vehicles.

“Our approach will save fleet operators capital while dramatically reducing waste in the global drive towards de-carbonization. There is evidence everywhere in the global economy that responsibility and commerciality are no longer mutually exclusive. This top tier investor commitment is testament to Lunaz’ path to defining the market for remanufacturing and conversion to clean-air powertrains,” says David Lorenz, founder of Lunaz.

Market Watch reports that after a new round of investment funding, Lunaz is expected to expand its business with upcycling and electrifying industrial vehicles such as municipal garbage trucks, fire engines and commercial vehicles with the claim that, “…a municipal authority could save more than 43% in the total cost of owning an upcycled and electrified refuse truck versus replacing their existing fleet with new equivalent electric vehicles.”

Your Thoughts on Upcycling Vintage Cars

We would like to hear your thoughts about converting vintage cars from ICE to EV powertrains: Is it cool? A good compromise between ICE and EV ownership? Or is it sacrilege?

Coming Up Next: The real reason why Tesla cancelled its Model S Plaid Plus.

Jeremy Johnson wrote on June 4, 2021 - 3:21pm Permalink
This is really cool - I never thought about changing an existing gas car to an EV!
Timothy Boyer wrote on June 4, 2021 - 5:22pm Permalink
Yes, it is cool---and this is coming from someone who feels conflicted about replacing his points ignition with an electronic one when rebuilding a vintage truck.
Dave wrote on June 9, 2021 - 4:52am Permalink
The simpler solution is to invest in the already proven fuel from air plants (check out on national geographic and others) that use solar energy to take CO2 from the air and combine with water to make petrol. This would allow ALL cars to be IMMEDIATELY CO2 neutral (along with buses, planes, ships, lorries, trains) without ANY need for conversion, littering the streets with millions of charging points and all the extra cables! IF you want to do anything useful then I would suggest investing in my company - hybrid by changing the undriven axles to electric power - hardly difficult and of course giving a nice boost to acceleration.

Toyota vs Tesla: Which Stock To Buy These Days
For Some Former Daimler Managers Daimler Is Authority, While Tesla Is Like a Startup
END_OF_DOCUMENT_TOKEN_TO_BE_REPLACED