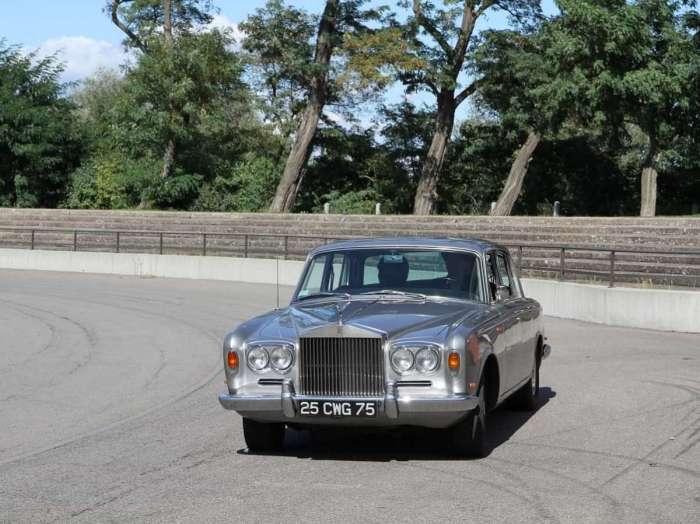 Many car owners of older and vintage classic cars are considering converting their vehicles to BEVs. Imgine converting a once expensive now older Rolls Royce into an electric car. While conversion is still expensive, it’s still much cheaper to convert to a BEV than to purchase a new EV.
Advertisement

Here are the benefits of converting an old luxury car into an EV.

You can even consider using the car as a daily driver with lower operating
costs than a new version of the car!

Many of the things we’ll see more often as we go along on this journey of vehicle electrification, is older and vintage collector cars getting EV conversions. As gasoline engines and their resources become more scarce in the ensuing decades, the reasons and option of converting a car from gasoline to electric becomes compelling. And when the conversion is complete, the car runs more quietly, smoothly, efficiently, and more reliably!

Conversion of vintage Rolls-Royce to electric

According to ABC News Australia, Coffs Coast restaurateur Danielle Wallace has a 1971 Rolls Royce Silver Shadow 1 she drives and her family has owned for decades, that she grew up in it.

She always had the mind to convert the car into an electric vehicle, but when she one day saw in a publication a vintage Porsche with an EV conversion, she then knew it had to be done to her Shadow. So she started doing research.

EV Conversion: What it entails on an older Rolls Royce:

Sea Electric of Melbourne is in charge of the electrical retrofitting of Ms. Wallace’s Silver Shadow. But they, like a lot of other places that do this kind of work on vehicles, were weary of doing that to her Shadow. The company specializes in converting larger vehicles Iike vans and delivery trucks into EV vehicles. So Sea is used to doing vans and trucks, not passenger cars. Ms. Wallace had to convince Sea’s managing director, Mr. Tony Fairweather to do the job. They finally gave in. The storied Crewe built 6.75 liter Rolls Royce dual cam naturally aspirated V8 engine and GM 3 speed automatic transmission will be removed, as well as some electrical and fuel lines, exhaust and manifolds. In replacement, an electric motor and 22 kwt high output electric charger are added with a 300 kwt battery inside the bonnet. The car isn’t huge but the engine bay holds a big block 7 liter, so there’s plenty of room.

So while buying a brand new EV car is a much more expensive proposition, an EV conversion on an old gas car is still expensive, and still not performed as often but this is changing. The economies of scale allowed prices for lithium ion batteries and EV motors and equipment to fall much faster than expected! So for the $25,000 it costs to convert the car to electricity, somewhere about the same price point of what a pretty good example of a Silver Shadow costs on the used market, it seems like good value, especially considering how costly repairing a Rolls Royce is, how much gas at 10-13 mph you’ll be saving, with a 28 gallon gas tank removed that barely got you 275 miles on a tank. Hopefully with the 300 kw battery, the old girl will now have a electrical range of about the same: 300 miles!

The whole process takes about a month from parts delivery to final road testing. When finished the electrical car will outperform it’s former self in just about every aspect other than range. And in that in some ways, it’ll become a totally different car.

Older cars fair better as EVs but not always: the reason-the ECU aka Brain:

Some older cars are extremely difficult to convert to an EV. There are many a startup company in Silicone Valley and elsewhere, that were born and died trying to do this. The more computer and electronic components a car has and is connected to some kind of ECU unit, which is the “brain” of the car, the more difficult and expensive the proposition is to do an EV conversion. You not only have to replace the part you no longer need in some cases, but you need to replace it with another OEM part, otherwise what you’re trying to convert won’t work. Sometimes you need to either have the ECU unit reprogrammed, or the new part added, otherwise it won’t work. Sometimes it’ just can’t be done. Because the Silver Shadow is an analog car with no computer, most variants carbureted that the few fuel injected variants weren’t computerized, it makes a perfect candidate for electrification.

There’s also public perception and appearance considerations for such a car when you electrify it. My professional experiences with my clients who owned some kind of Rolls Royce taught me that driving one to show up somewhere, had the extreme range of being somewhat fun to somewhere on the other extreme of being a daunting experience. And I have stories that prove this. There are some places one should never drive a Rolls Royce to, some you wouldn't expect. People will be happy to see your classic car especially since it’s been electrified as opposed to being a gas guzzler for the rich that continues to suck life out of the planet in its old age. See what I mean? So folks will become encouraged as opposed to turned off when they see Ms. Wallace driving such a car around town knowing it doesn’t hurt the environment.

The growing world of “restomods.”

A vintage classic car that underwent an upgraded BEV or fuel source conversion, also known as a “restomod,’ may not hold the same value it once did when all the original components to the car were together. "I think there would be a few who would not approve," veteran local Rolls-Royce dealer David Eckberg told ABC Australia about Ms. Wallace’s Silver Shadow conversion to BEV. But conversions like these surely cause interest at fairs, auto shows, Concourse, and meets. It wouldn’t be surprising if some of the Car Concourse circuits around the world create a category for these kind of cars, so that these cars can once again enter and compete.

Could you imagine? An old Rolls Royce as a daily driver pennies per mile!

What seems most appealing about EV conversions to classic cars like the iconic Silver Shadow, is that you can actually consider using the car as a daily driver, to not worry about gas and maintenance costs, and depend on it being reliable. I know by professional experience that this car is outrageously expensive to repair: $2500 for OEM radiator hoses that require replacement every two years, $4000 for a USED rack and pinion steering rod, and such. Because the cars were hand assembled and limited in production, OEM parts are usually required.

Fabrication need not apply unless you electrify!

What do you think of this Rolls Royce EV conversion?
Do think it’s flying lady will fly?

Let us know in the comments section below!