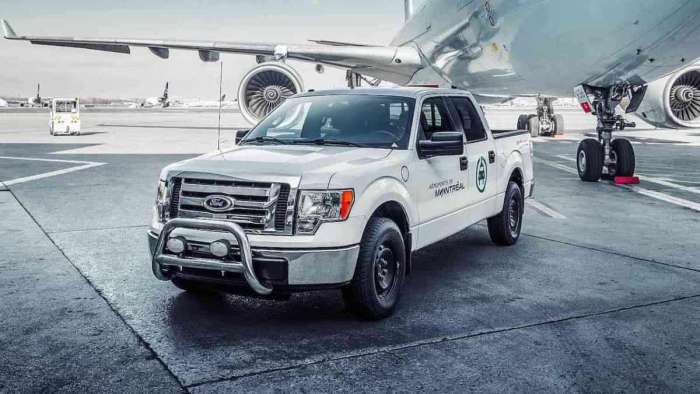 If you are looking to purchase a Ford F150 Electric Truck and don't want to wait another couple of years until it rolls off the assembly line, you may want to try an electric conversion from Ecotuned of Montreal.
Advertisement

Okay, your whistle is all whetted, and you are ready to purchase an electric Ford F150, now, not a year or two or three from now. If Ford has a prototype Ford F150 EV out there and it is busily hauling 1.25 million pounds of rail cars and other Ford F-Series pickups, why can’t you have one? It’s a valid question, and the answer is that the Ford F150 EV (electric vehicle) is still in the debugging stage. They are working out the kinks they are finding and changing things before they unleash their pickups on customers.

If You Can’t Wait Two Years

But, wait, there is a way you can still have an electric Ford F150 pickup, though it will cost you a few bucks. We’ve been watching various websites and publications in the last couple of weeks since the big train haul to see what the results were. At Torque News, we’ve heard about Elon Musk’s comments (he’s ready to compete, “real soon now”), and Ford has assured us that a Ford F150 EV is in the pipeline sometime in the next two years or so. And, we also have the sense that if there were a Ford F150 EV for sale, there would be lots of buyers for it, right now.

Well, according to Green Car Reports, if you want to have an all-electric Ford F150, you can turn to a Canadian-based company, and they will convert one for you right now. If you don’t mind a rather basic Ford F150 electric conversion. A firm called Ecotuned, which hangs its collective EV rebuilding hat in Montreal, will convert an F150 for you so you can own your own F150 EV now.

Though they build their vehicles one at a time – to date they have made about 15 – they are currently reportedly working on more conversions. Some of their customers include Montreal-Trudeau International Airport; Hydro Quebec, a utility company, and IGA, a grocery store chain.

Ford F150 Manufacture Not In Its Future

Having no intention of becoming a giant automaker, a high-volume conversion manufacturer, or a battery pack manufacturer, Ecotuned says its focus is ensuring that the parts they use work together well. The reason they have to work well together is that Ecotuned’s ultimate goal is to become a major electric conversion house.

Pierre Gladu, the company spokesman, said the company is taking trucks headed for the boneyard or into secondary markets; pickups that have polluting powertrains and recycling them, using electric motors. He says that Ecotuned converts not only Ford F150s, but it will also change Ford E-Series vans, and convert GM or Ram trucks, as well. Ecotuned’s conversion works on any Ford vehicle that uses the H-frame.

To convert a Ford F150, a pair of mechanics takes about four full days to:

Though Ecotuned has some rather modest plans, its ultimate goal is far more ambitious. As Gladu told Green Car Reports, they aim “to be a leader in the field of electric vehicle conversion in North America.”

“We’re not a car manufacturer. We’re recycling those cars that would otherwise go to the scrapyard or the secondary market with polluting engines,” Gladu says. Ecotuned’s goal is to take a tired out Ford F150 and revitalizing it, turning it into a truck with no tailpipe emissions.

The car conversion company typically uses a BorgWarner HVH250 permanent-magnet motor. The motor carries a rating of 214 horsepower and 295 pounds-feet of torque. Putting numbers around this, an Ecotuned F150 EV would have a top-end of about 106 mph and a 12-second 0 to 60 time. In an interesting twist, instead of using a continuously velocity tuned (CVT) transmission, Ecotuned uses a two-speed transmission, made by racing component maker Bert. Because of this, Ecotuned converted trucks can tow up to 18,000 pounds. Gladu described a downshift from low up to 59 mph. A specialized PID controller blips or brakes the electric motor about three times the rpm in a quarter of a second.

Interestingly, an Ecotuned conversion works efficiently with a Ford F150 with no changes, other than the conversion pieces. Importantly, the weight is essentially the same as the Ecotuned Ford F150 conversion is only four percent heavier than a gasoline Ford F150.

Because Ecotuned uses widely available components, it can offer a conversion kit that provides a solution “that allows the fleet manager to have a turnkey solution, which they are all looking for.”
Ultimately, the conversion company would like a partner like Midas or Mr. Muffler, offering a complete kit that can be assembled by them in their shops. Right now, Ecotuned is developing a conversion kit that will springboard them into a partnership arrangement. Meantime, the company is looking to complete 1,000 conversions. In March, they moved into a larger facility that would facilitate these conversions.

One thing that Green Car Reports learned is that if a consumer wants to wait for a more sophisticated version for personal transport, then the buyer should wait for Ford’s factory offering. Ecotuned’s stated goal is to save money for managers, using a relatively inexpensive conversion. The savings occur over the long run. Meantime, a secondary benefit of a conversion is that it will cut the carbon footprint too, while also saving on maintenance costs, as well.

DeanMcManis wrote on August 4, 2019 - 12:33pm Permalink
$23-$30K (plus the F150 truck) is a hefty price for 87-150 EV miles of range! Such a conversion is admittedly a LOT of work, and new batteries are very expensive. Still it is good to see EV conversion shops providing this service, with the promise of DIY kits. At some point the battery prices will drop, and we will start to see more affordable complete EV conversion kits for cars at prices less than buying a used electric car. Currently there are no used (or new) EV F150s to buy, so for now this is the only path for people who really need one.
Marc Stern wrote on August 8, 2019 - 8:07am Permalink
Right on target, thanks!
Suresh paliwal wrote on June 12, 2021 - 9:42am Permalink
Purchase all part of ev.
Waltair wrote on September 16, 2021 - 6:03pm Permalink
Works if donor EV has same weight as recipient. Not many wrecked EV at reasonable prices to pick from…they generally get fixed up, or used for parts for same kind of vehicle. Hard to find.
albert romero jr wrote on May 14, 2022 - 8:11pm Permalink
I own a 2007 F150 with a 4.6 V8. I'm intrigued with the possibility of an electric powered conversion. At 69 years of age and recently retired, I don't want the expense of buying another new truck, much less pay for an electric f150 from Ford. While my p/u still runs well, gas prices suck. If Ford intends to offer a reasonably priced conversion kit, I can wait. $30k today is not realistic for my pocketbook. Keep me posted.
Harold Brewer wrote on June 8, 2022 - 7:57pm Permalink
I have a 2005 F150 FX 45.4 L that I would like to convert to electric