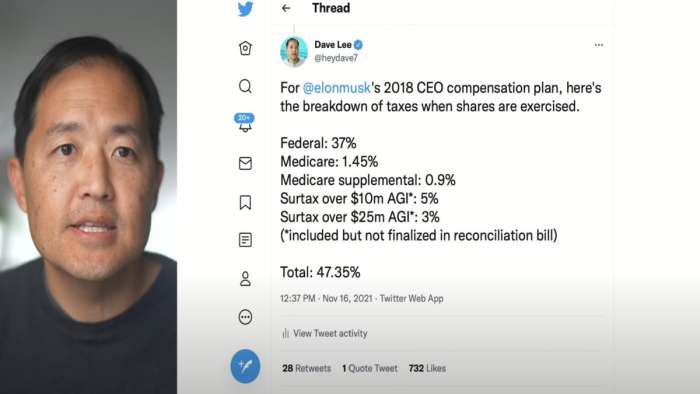 There is a recent video from Dave Lee, a well known Tesla investor who shares videos on investing - mostly about Tesla. He talks in great details about the sales of Elon Musk's stock options and regular shares of stock, both of which are being taxed heavily.

First, let's take a look at where Elon Musk is today in selling stock. Remember, this is based on a Twitter poll where Elon asked if he should sell 10% of his stock in order to pay some taxes. Elon was prepared to act in either direction depending on how the poll results came out.

As of yesterday, we can see here that Elon Musk has exercised 6,376,005 shares of stock options, sold 2,802,273 shares of regular stock and is about 48% complete. There will be more shares sold today, most likely, pushing this number over 50%.

That's a lot of stock. How much will Elon Musk pay in tax? Once again, let's look at what Dave Lee has put together to answer that question:

Here's a breakdown of @elonmusk's tax rate when exercising his stock options.

We can see here that Elon Musk is paying the following taxes:

Were Elon Musk to have his primary residence in Texas, the 13.3% California tax rate would disappear, saving Elon Musk several billion dollars in taxes...

And finally, as if this wasn't enough taxes, let's take a look at what Dave had to say about tax upon Elon's death:

Yes but those shares will be taxed at Elon's death (if not sold earlier). Current estate tax rate 40% (and likely will be higher in future).

What Will Elon Musk Do Going Forward?

We know that Elon Musk has stock options that will expire in 2028, which will trigger another situation like this at that time. And the share price of Tesla could be $5,000 or more. The taxes Elon pays at that time could be 5 times what they are now giving the U.S. government hundreds of billions of dollars.

At some point, Elon will get out of Tesla stock. I'm not sure when that will be. He said he will be the last one out. Will that mean at some point he will sell all his shares of Tesla stock? Will he do it at the point he is no longer the CEO of Tesla? That would be interesting.

Once Elon sells his Tesla stock, which I believe will be a while down the road, he will likely use that money to make civilization multiplanetary. That means investing the money into SpaceX and StarLink - as well as Neuralink, since Neuralink will assist with the merging of AI. Elon may even take a trip to Mars if everything works out great!

The bigger problem here is that people with assets are benefiting in a way that is much more beneficial to those with asset ownership. But for those who are poor and can't afford assets, it creates a greater gap in inequality. The U.S. government knows through its quantitative easing, that this would cause a wealth gap through extra money printing.

We are seeing inflation right now in real estate, gas, and other commodities. There is a natural flow of inflation when monetary supply increases - more money is available to everyone. Data is showing that inflation is here to stay for a while.

Rental prices have jumped over 30% in just the last 12 to 18 months, and I now people personally that have had to move out of their apartment because they could no longer afford rent.

This can be solved through deflation of goods and services, and greater serving and empathy from those hoarding wealth for their own to extend in giving to others.

What do you think of Elon Musk's sale of Tesla stock recently? Was this the right way to do it? Will he do another Twitter poll in the future?

John Goreham wrote on November 18, 2021 - 9:11am Permalink
Good overview, Jeremy. I don't agree with all of it, but I liked the breakdown of Elon Musk's tax payments. I have to ask you, when you say rent has increased 30% over the past year or so, where has that occurred? Is it in a small area? Just cities, where real estate values are basically luxury purchases? I own three affordable housing units in Metro Boston. My rents have not increased at all in this period for two of the three and one had an increase equal to the increase in property taxes. Inflation multiplies the rent increases. Not only are the rent dollars worth less year over year, as you point out, but the property taxes, utilities, maintenance costs, insurance, and other cost-side aspects of rent (which are paid regardless of whether the unit is owned or rented) also increase. A fair estimate of the impact of inflation on rent is to multiply the inflation rate by about 2X. So, that would mean the rent increases for this year on average should be about 9%. Which is what I am seeing in the general area of Massachusetts. Aside from the fancy-pants towns like Boston, Cambridge, etc. which are a combination of luxury and government-provided housing. Here's a link that shows what has happened with rents in my region over the past year or so. https://www.zumper.com/blog/boston-metro-report/ Here is a national report on rent. https://www.apartmentlist.com/research/national-rent-data
Jeremy Johnson wrote on November 18, 2021 - 3:01pm Permalink
I've seen rent increases of 30% here in Utah (Salt Lake and surrounding areas) from $1,100 to about $1,400 and many single moms I know have had to move in with other people. Thanks for reading!

LG's New EV Battery Plant Is a Welcome News for Tesla
Tesla Giga Berlin's New Hurdle: It's Not Only the Gov't, but Now Tesla Itself
END_OF_DOCUMENT_TOKEN_TO_BE_REPLACED