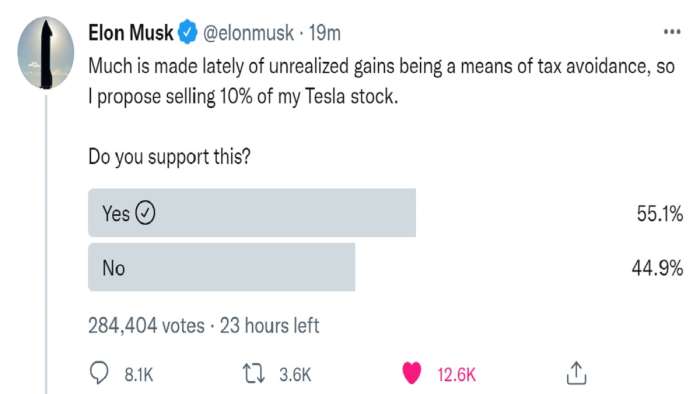 Elon Musk Proposes Selling 10% of His Stock With Twitter Poll

Elon Musk has just Tweeted and done a poll on Twitter asking if he should sell 10% of his Tesla stock to show that he isn't trying to avoid paying taxes. Is this a good idea? What are the pros and cons? What will actually happen?
Advertisement

BREAKING: Elon proposes to sell 10% of his Tesla stock to show he's not avoiding taxes. Early poll results support his proposal, and he agrees to abide by the results of the poll. https://t.co/UdPOuo1UnQ

Elon Musk has just posted to Twitter and asked if he should sell 10% of his Tesla stock to show that he isn't avoiding paying taxes. Is this a good idea? Let's weigh the pros and cons.

The one advantage of having a super CEO like Elon Musk for Tesla is that he has led them to a very commanding lead in the electric vehicle and energy business. On the other hand, it's also a weakness if he makes a decision that isn't the best for shareholders or other people.

I think that we are going to see a pivot on Elon Musk's statement and that he will take this to a shareholder vote, along with an eventual stock split. I just don't see Elon letting so many Twitter bots and shady accounts influence his decision to sell stock.

The only thing that may override this is that Elon Musk has some expiring stock options that he is going to have to sell and this statement may be because of that. He's going to need to pay tax for those stock options and he has to get the money from somewhere - either borrowing it or selling Tesla Stock to pay for it.

Elon Musk has $18 billion dollars in $TSLA stock options expiring soon. He must either borrow billions or sell shares to pay the tax. How many shares is it? When exactly do they expire? What is the decision that @elonmusk is facing? I found some answers.https://t.co/1yjJfjk4aD pic.twitter.com/DJ3oWWSR1Z

If Elon Musk does sell some of his stock, he will receive a lot of criticism as Elon stated he is the first in Tesla and will be the last out.

I vote no. @elonmusk what happened to first money in and last money out?

I think he can still be the last out, he doesn't have to hold every single share to the end. It's ok to take some profits. And perhaps he's found a way to solve world hunger and that is the reason.

What do you think of Elon Musk Tweeting about selling stock? Is Twitter the right place to do a poll for his decision?

LG's New EV Battery Plant Is a Welcome News for Tesla
Tesla Giga Berlin's New Hurdle: It's Not Only the Gov't, but Now Tesla Itself
END_OF_DOCUMENT_TOKEN_TO_BE_REPLACED